When thinking mathematically, most people use proportions. For example, if someone is brewing coffee and needs two scoops of granules for six cups, they intuitively know they need four scoops to make 12 cups.

So if a person who thinks that way was told a 100-hp engine at full throttle could make a certain car go 100 MPH and then asked how fast a 200-hp engine would make the same car go, they’re likely to answer 200 MPH.

Unfortunately, nature doesn’t always work in proportions. Auto racing fans know that it takes a lot more than 200 hp to push a race car around the track at 200 MPH. It takes close to 800 hp to produce that kind of speed. Most of that power goes into overcoming the aerodynamic drag of the car at those high speeds.

Hydronics also has its share of non-proportional relationships. One of them is how the heat output and temperature drop across a heat emitter is affected by the flow rate through it.

For example, suppose a given length of residential fin-tube was yielding a heat output of 5,000 Btu/h when operating at a flow rate of 1 gpm. If asked what would happen when the flow rate is doubled while all other conditions remained the same, many people, including plenty who work with this hardware every day, would say the heat output would double.  That answer might seem intuitive, but it’s not correct.

How about if the flow rate was increased from 1 to 4 gpm? Surely a 400% increase would at least double the heat output. To answer this, look at some IBR output ratings from baseboard manufacturers. They’re given for a wide range of water temperatures and for flow rates of 1 gpm and 4 gpm. You’ll find the rating at a flow rate of 4 gpm is about 6% higher than the rating at 1-gpm, all other conditions being the same.

Suppose you made up a hydronic circuit like the one shown in Figure 1. 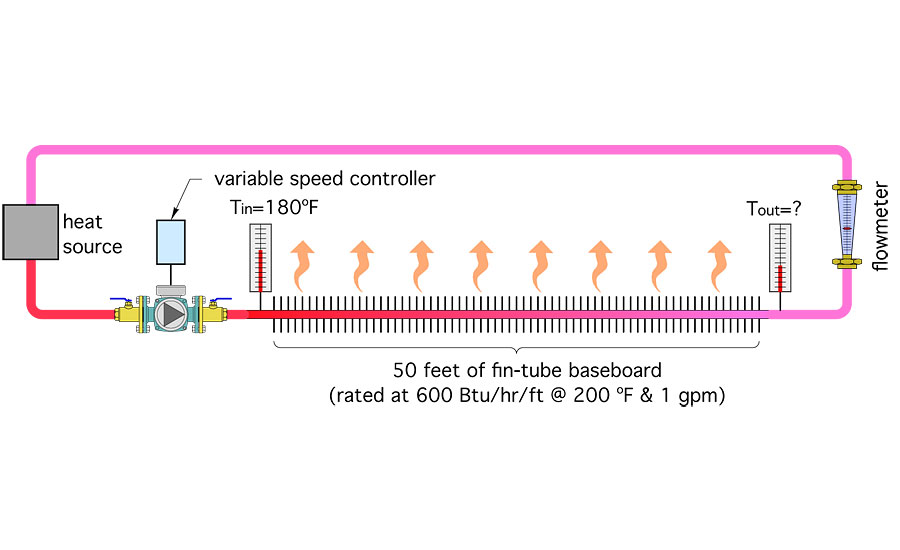 This circuit contains 50 ft. of residential fin-tube baseboard along with a variable-speed circulator, flow meter, two temperature gauges and a heat source. That heat source is always controlled so the supply water temperature into the fin-tube element remains at 180° F.

You turn on the circulator at full speed and the flow meter indicates 8 gpm.  The water temperature entering the fin-tube baseboard is steady at 180° and after a short time the outlet temperature of the fin-tube element stabilizes at 174°. Knowing the flow rate and temperature drop along the fin-tube, you can calculate the rate of heat dissipation.

8.01 = a number that makes the units correct

You now have a measurement of the heat output at a flow rate of 8 gpm.

Now that you’ve captured all this data, you can use it to calculate the temperature drop across the fin-tube element (e.g., Delta-T), as well as the heat output rate from that element.

You then create graphs for heat output and temperature drop as a function of circuit flow rate. They should look similar to the graphs in Figure 2. 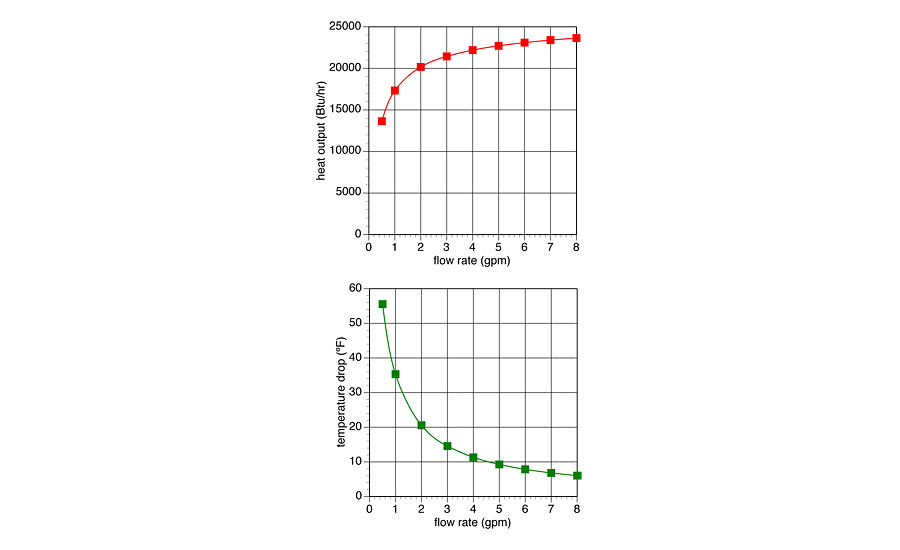 It is what it is

The graph of heat output (q) vs. flow rate is probably not what you expected — especially if you think proportionally. It shows heat output from the fin-tube element drops off rather slowly as flow rate decreases — until you get down to a flow rate of about 2 gpm.  Below this flow rate the heat output really nose dives with any further reduction in flow rate.

Although it might not be what you expected, this non-proportional relationship between heat output and flow rate is reality. This characteristic is shared by all hydronic heat emitters: fin-tube, convectors, panel radiators and even radiant panel circuits. Heat output changes quickly at low flow rates, but gradually at higher flow rates. This trend also holds true at other supply water temperatures.

Next, take a look at the temperature drop across the fin-tube over the same range of flow rates.

First, it’s obvious the temperature drop doesn’t remain constant as flow rate changes.  The Delta-T happens to be at the commonly assumed value of 20° when the flow rate is just a bit more than 2 gpm. As flow increases above 2 gpm, the Delta-T keeps dropping. At 8 gpm it’s only about 6°. When the flow is only 0.5 gpm, the Delta-T is slightly above 55°.

These Delta-T values are the direct result of heat output. There’s nothing in this setup that forces the Delta-T to stay at any particular value. There’s also nothing “wrong” with the fact Delta-T is changing. It just goes where nature takes it as we stand by and watch.

There’s nothing special about operating a hydronic heating circuit with a temperature drop of 20°. In Europe it’s common to see panel radiator circuits planned for design load Delta-Ts of 30° or perhaps even higher. European designers do this because it reduces flow rate, and reduced flow rate means small pipes and small circulators. It also means lower operating costs. Over there, every watt counts. They won’t operate a circulator at 45 watts if it can create the necessary flow rate at 35 watts. They care and so should we.

Radiant floor heating circuits also can be designed for different design load Delta-Ts. I like to design around 15° for floor circuits in areas expected to have “barefoot-friendly” floors. The smaller Delta-T reduces variation in floor surface temperature a bit compared to what it would be at a Delta-T of 20°. However, in an industrial building, I may push the design load Delta-T for the circuit up to 25°. That’s because heated concrete slabs in most industrial buildings don’t need to be “barefoot-friendly.” Slightly wider variations in floor surface temperature are hard to notice through a pair of work boots. Designing around slightly larger circuit temperature drops also reduces flow rate, which in turn decreases circulator size and power requirements.