Understanding the worst places in a commercial kitchen or food processor.

So, one day we did a web-search for Mike Rowe and “Dirty Jobs,” asking: Was there a show that had Mike, hands, shoulders and head deep within a big, fat grease trap? The closest we came to finding the answer is a YouTube video with Mike titled, “Episode 44, The Greaseman Cometh.” Though it was a great story — as they all are — it had nothing to do with grease traps or interceptors.

Considering all the places he’s been while slathered with sweat and slime, Mike Rowe’s never seen the least glamorous, ugliest, most unlovely places on planet Earth. Those secrets are held inside restaurant grease traps — the devices design to intercept fats, oils and grease (FOG) from leaving a kitchen facility and entering a sewer system.

Slimy FOG compounds that, by design, are trapped and held in place are chiefly byproducts of cooking that leach out of meats and dairy products. The idea is wastewater flows from sink, wash area and cleaning table drains into tanks that are designed specifically to trap the crap that shouldn’t enter sewage systems. In a grease trap, solids settle while oils, fats and grease — usually lighter that water — float to the top where they’re arrested, keeping them from flowing out with the wastewater discharge.

Typically, a grease interceptor works the same way as a grease trap, but on a much larger scale. They’re actually pretty simple devices, and their basic design hasn’t changed since the 1880s.

Ask anyone in the municipal wastewater treatment business — one of the biggest environmental problems grease can have, outside of clogging pipes, is the disruption caused in the “digestive” process of water treatment plants. Bacterial processes are used to break down and clean sewage, but FOGs can destroy these bacteria, causing all sorts of problems.

The following will outline the most common method for grease trap/interceptor sizing along with a few variables, with solutions that may affect overall system performance. 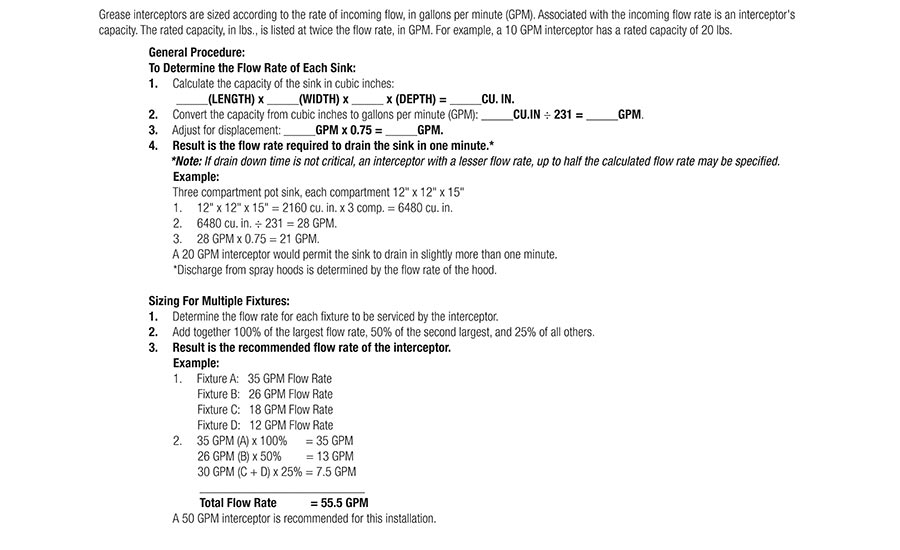 In the scenario described above (with a flow rate of 55 gpm), additional flow control devices may be needed if the incoming velocity/flow exceeds the recommended velocity. A high velocity incoming flow results in more turbulence, which reduces the system’s efficiency and increases the separation time.

By increasing the size of an interceptor unit, both the flow path and separation time are increased, allowing the system to capture the particles more effectively.

Install a solids interceptor in series (prior to the grease Interceptor) if: 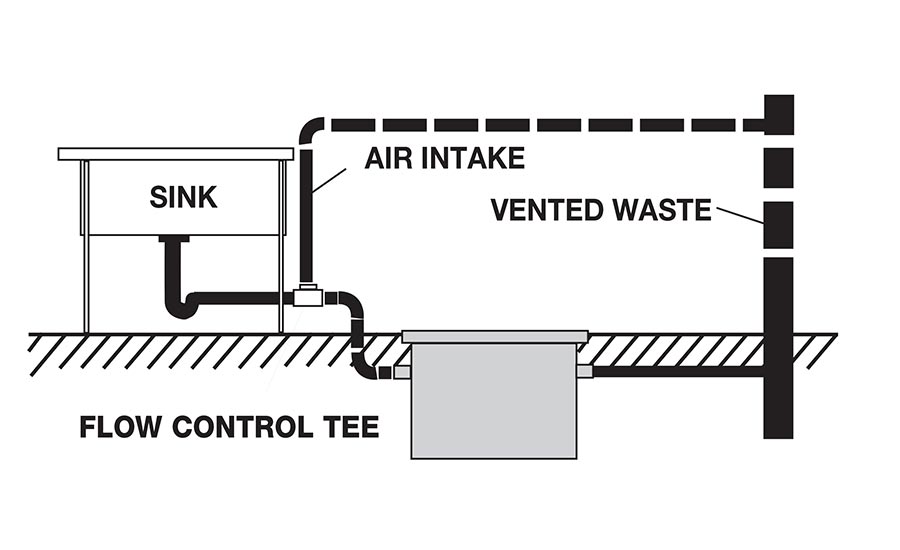 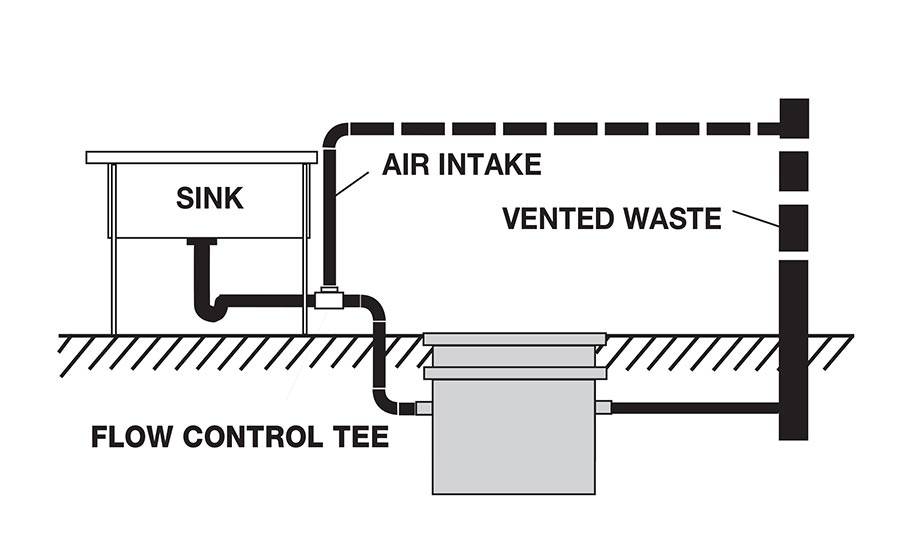 Be sure — prior to finalizing the install location — to consider the clearance necessary to accommodate any connective piping and provide sufficient space for proper removal of the cover for cleaning purposes. 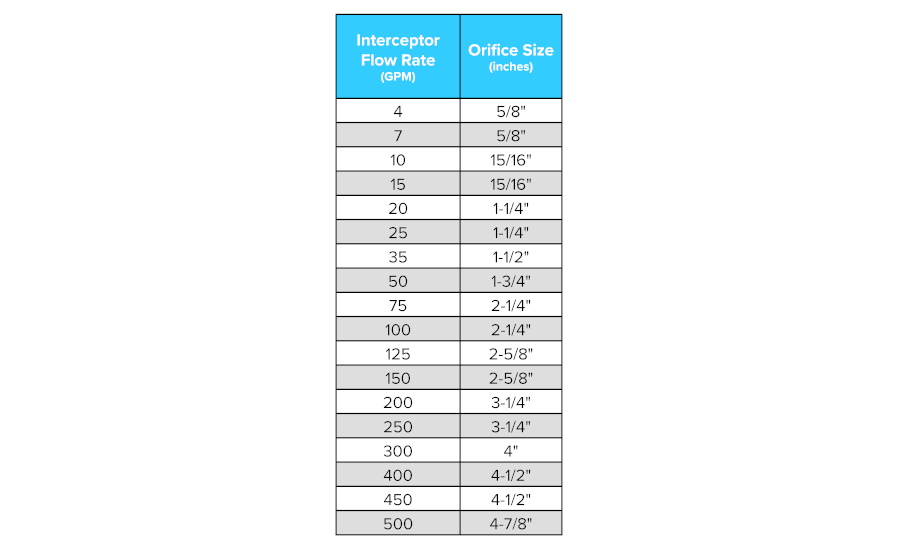 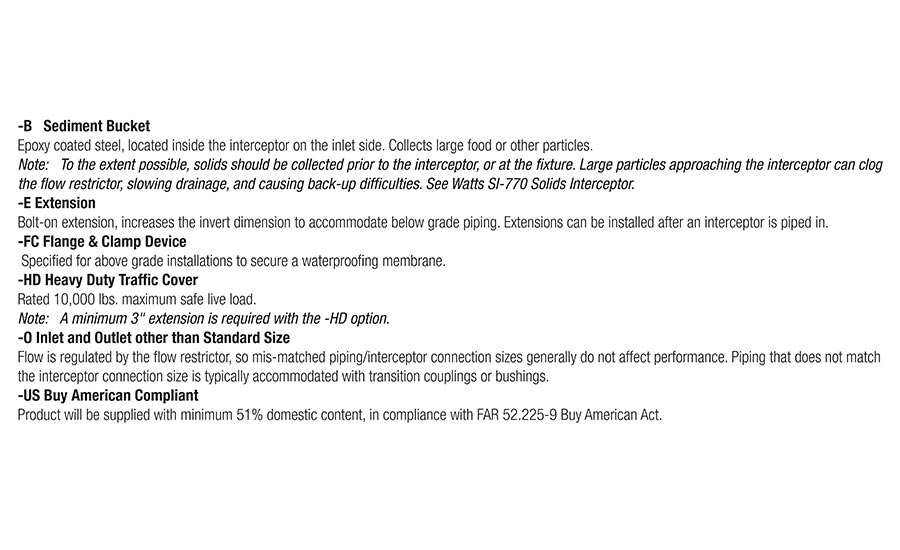 The cleaning frequency of a grease interceptor system is determined by the capacity of an interceptor (measured in pounds of grease that can be trapped within it) and the amount of incoming grease.

Because of this, grease removal intervals may vary from once a week to once every several weeks. When the necessary cleaning schedule has been determined based on a unit’s specific application and size, regular cleaning is necessary to maintain the system’s function and efficiency.

After the removal of accumulated grease and waste material, the interceptor should be thoroughly checked for any clogs or blockages in the inlet, outlet and air relief.

The following steps should be followed during the grease removal and cleaning process:

If there is a semi-automatic interceptor in place, use the following steps for cleaning: