This important product technology continues to evolve to meet the constantly changing needs of facilities and those who operate them.


When the topic of grinder pumps is broached, the horror stories come out of the woodwork when it comes to items that should not be flushed down a toilet. Buckle up!

“We found multiple bedsheets tied together at the ends, as if someone was going to try to escape from the top floor of a castle,” Ashland Pump Products and Marketing Manager Kim Starkey explains. “It is difficult to imagine trying to flush something like that down a toilet. There were no nearby castles, but there was an industrial facility next to the lift station. The facility manager had no idea where the sheets could have come from.”

Liberty Pumps Vice President of Sales and Marketing Randall Waldron chimes in with this gem related to a high school football ritual.

“A high school football team in Ohio had the crazy tradition of flushing their socks down the toilets in the locker room after every game they won, always causing a big repair issue,” he says. 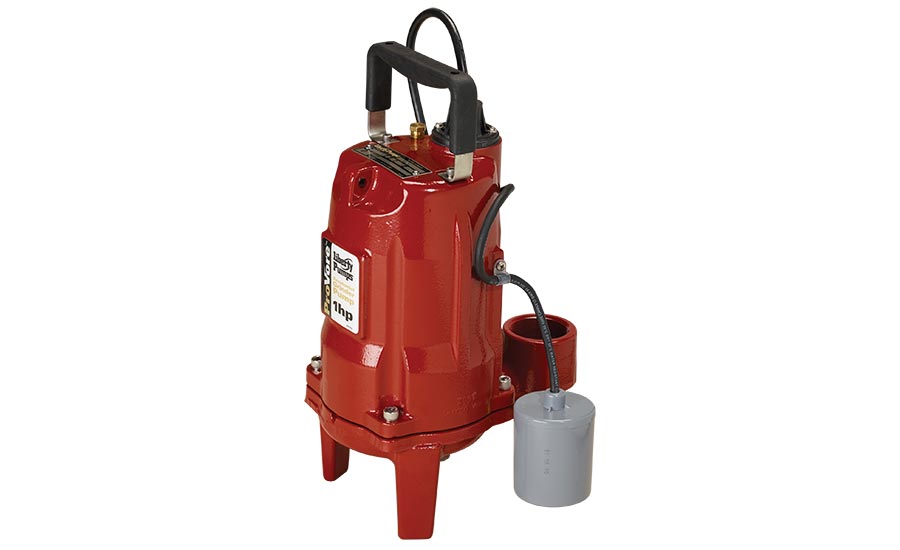 “Oh, the stories!” Franklin Electric Product Manager Non-Clog and Grinder Pumps Kyle Johnson says. “One of our customers reported an installation for our 2-HP IGP series grinder pump at an assisted living facility. They were experiencing repeated clogs because hundreds of disposable adult underwear were being flushed daily.”

Xylem Wastewater Product Manager Bo Gell says retail stores are breeding grounds for some of the best clogged-toilet stories, “but some of the best stories I have heard are based on schools and prisons,” he says. “The amount and variety of items flushed is scary and sometimes quite dangerous — anything from needles to knives to underwear to jackets. How some of the material gets flushed is truly amazing.”

On a more serious note, with this type of craziness abundant in non-residential facilities throughout the country, having the latest and greatest reliable grinder pump technology available to tackle the toughest of clogs and backups is paramount — particularly coming out of the COVID-19 pandemic.

“The biggest trend in the grinder world is for improved handling of various solids, while also grinding to a fine slurry,” Ashland’s Starkey says. “Customers are dealing with an ever-increasing variety of non-typical items in the waste stream. Everyone is familiar with the challenges of dealing with fibrous cleaning pads and wipes, and this continues to be prevalent, but the pandemic has introduced a new surge in disinfection wipes and masks to the stream. A modern grinder pump needs to be able to handle this increased load without clogging or jamming and without losing the ability to reduce the solids to a fine slurry, which was one of the key original benefits of grinder pumps. The pump needs to prepare the waste stream to move through the downstream system easily.” 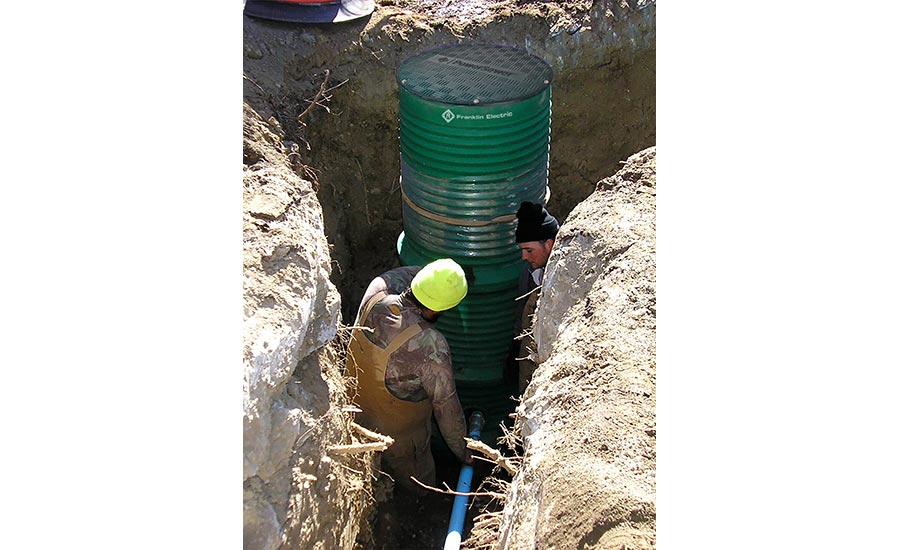 Franklin Electric’s Johnson says grinder pumps must be up to snuff when it comes to tackling a new wave of items being flushed down toilets. “We are hearing of more ‘flushable’ wipes and fabric items causing clogs,” he says. “In situations like this, a grinder pump literally has to be able to cut, pass and move it. It’s a tough job and one increasingly more common as new restroom products are released.” Photo courtesy of Franklin Electric.

Franklin Electric’s Johnson is seeing the same thing. “We are hearing of more ‘flushable’ wipes and fabric items causing clogs,” he says. “In situations like this, a grinder pump literally has to be able to cut, pass and move it. It’s a tough job and one that is increasingly more common as new restroom products are released.”

And this from Zoeller Pump Marketing Manager BJ Hentrup. “Grinder pumps are being desired more than ever to combat the increasing amount of PPE finding its way into the waste stream,” Hentrup says. “This increase is not expected to decline anytime soon. Not all grinder pumps are created equal, you get what you pay for. If you elect to go a cheaper route and install a standard sewage ejector pump where a grinder pump would have been a much better choice, there is where the issues occur.” 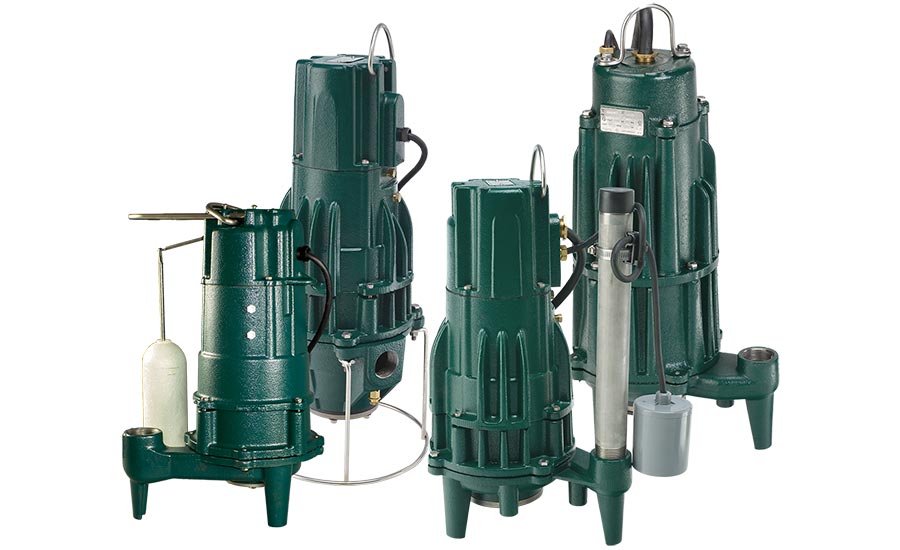 Zoeller Pump’s Hentrup notes today’s waste stream landscape looks nothing like it did a decade ago. “Grinder pump technology continues to evolve to meet the increasing demand of the ever-changing waste stream to address the influx of material that 15 years ago was never a problem or even existed.” Photo courtesy of Zoeller Pump.

Shifts in the marketplace

Liberty Pumps’ Waldron notes the grinder pump market is seeing a heightened focus on efficiency. “Traditionally, grinder pumps have required larger horsepower and torque to provide adequate grinding capability,” he explains. “This was especially true in the early years when grinders were first being developed — a 2-HP pump being the most common in the market. Recently, many manufacturers have greatly improved the efficiency of their cutter designs, allowing for smaller, lower-HP models to enter the market.”

Xylem’s Gell says one of the largest shifts occurring right now is based on the movement of the population to more rural settings. “This requires that many homes are upgraded or built to current standards, and that includes potable water and wastewater,” he says. “A decentralized system requires more design than just connecting to the municipal infrastructure. This is where the engineers are very important to make sure the water and wastewater systems are appropriate for the location, which may include a variety of environmental conditions.”

Make no mistake about it, the experts say, grinder pump technology has enjoyed significant growth in recent times.

“Demand is growing at significant double-digit rates for grinder pumps, specifically,” Franklin Electric’s Johnson says. “We would expect to see this growth continue with the new infrastructure bill. As communities with aging septic systems or population growth have the opportunity to upgrade and replace, we would anticipate the call for lower-pressure sewer systems including grinder pumps to continue increasing.”

Zoeller’s Hentrup adds: “Grinder pump technology continues to evolve to meet the increasing demand of the ever-changing waste stream to address the influx of material that 15 years ago was never a problem or even existed.”

What the future holds

Xylem’s Gell says while the nature of water has not changed, many of the older pump technologies used in the past have been updated through time. “This may include small impeller features or some of materials that are used,” he says. “There will be small advancements, but the game-changer will be the digitalization of the standard pumps. This will allow the pumps to be able to report on the condition of the pump, perhaps the materials being pumped and much other useful data as the pumps need to be more hydraulically efficient, but energy efficiency is on the minds of the pumping world.”

Ashland’s Sharkey says cutting systems will continue to be refined to accommodate the changing waste stream.

“Advanced material science will allow for cutters to remain sharp while operating in abrasive environments,” she says. “Eventually, premium efficiency motors will probably be required for grinder pumps, which could create challenges with maintaining the high torque required when attempting to start a grinder while a solid waste item is within the cutting mechanism.”

Zoeller’s Hentrup tells the story of a newly opened, high-end restaurant that installed a sewage ejector in the basement where the restrooms were located.

“The local factory representative for the pumps advised the owner this type of system would be a problem since not only the employees, but the public would use these facilities,” Hentrup explains. “Within 60 days, the rep called in to retrofit the system to a grinder pump system due to the influx of non-sewage-related product that clogged the ejectors nearly every other day at a tremendous expense to the owner—diapers, underwear, condoms, etc., things you typically would not associate with a restaurant’s waste stream. Once the grinders were installed, the problems went away immediately.”

So when asked about the future of grinder pumps, Hentrup is brief and to the point:

“The need for grinder pumps will never cease.”