Strive for what seems impossible at the present.

We live in a world where most theoretical ideals can only be approached rather than fully realized.

For example, imagine a building with characteristics that allow the rate of heat loss to always match the rate of internal heat generation from sun-light, people and equipment. Such a building would not require any heating system. Some of the new Passivhaus buildings approach this condition, but still can’t guarantee that internal gains alone will always be sufficient to maintain comfort.

Even though many theoretical ideals cannot be fully achieved, it is constructive to imagine them, and drive our system designs toward them. Such an approach encourages the industry to strive for continuous improvement, higher efficiencies, improved reliability and smoother system operation.

Let’s take a look several ideals, as well as design practices that move the systems we create toward these ideals.

For example, imagine an antifreeze solution coming from a solar collector at 150º F. It enters a heat exchanger and transfers heat to a stream of water. The water leaves this ideal heat exchanger at 150º. Not 149.9º, but 150º.  Such a heat exchanger would have a 0º approach temperature difference.

The good news is all the heat that could possibly be transferred from the antifreeze solution to the water would occur in this ideal scenario. The bad news is this would require a heat exchanger with infinite internal surface area. Sounds pretty expensive…

Fortunately, it’s now relatively easy, using free online software, to select heat exchangers with approach temperature differences of 5º, and in some cases even lower. The smaller the approach temperature difference between the incoming heating fluid and leaving heated fluid, the larger the heat exchanger has to be —- and bigger heat exchangers cost more. When selecting heat exchangers, designers should evaluate performance gains vs. higher cost over the full lifecycle of the system. It often makes sense to go with a larger exchanger where the incrementally better performance results in the useful capture of millions, or even billions, of Btu over many years of operation.

By the way, an ideal heat exchanger would also have to operate with zero pressure drop on both sides, and remain free of any scaling or other fouling conditions that could degrade its thermal performance. Designers should approach these ideals by selecting heat exchangers for minimal pressure drop, and operate them with proper ancillary details such as demineralized water and devices that provide effective upstream dirt separation.

Holistic headers: Here’s a question that probably has not kept you awake at night in contemplation: What would be an ideal hydronic header?

The answer is pretty simple: One that splits off the entering flow into the necessary branches while producing zero pressure drop and zero heat loss.

Imagine a “copper basketball” with tubing supplying several branch circuits sticking out of it in several directions. A single larger tube carries heated water into the copper basketball header.  The concept is shown, at least 2-dimensionaly, in Figure 1. 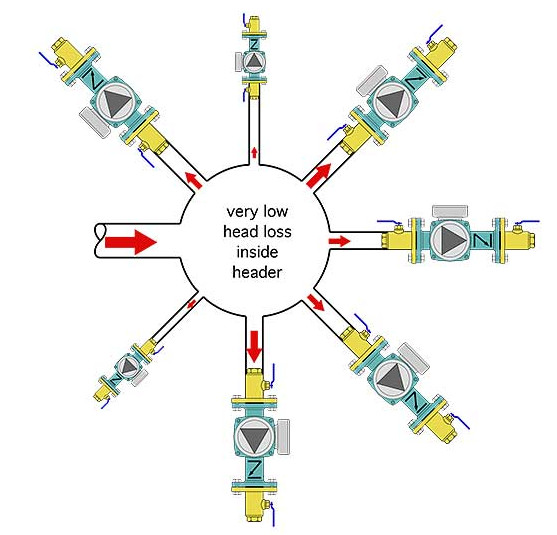 The pressure drop within the copper basketball header would be very low, but not quite zero. If this header were well-insulated, it could also provide very low (but not zero) heat loss.

Now, imagine how unwieldy such a header would be to install in a typical mechanical room.  Think about what it might cost a manufacturer to ship such a header to a jobsite. Although it’s hydraulic and thermal performance would be very good, this design just doesn’t pass the practicality test.

The next best thing that would pass the practicality test is a “short / fat” header — one that minimizes rather than eliminates pressure drop; One that arranges the branch circuit connections in a row or two to make them compatible with typical piping layouts.

How do you create a short, fat header? My suggestion is to select a pipe size that yields a flow velocity of only 2 feet per second at the entrance of the header when all branch circuits are operating at full flow rate, as shown in Figure 2. 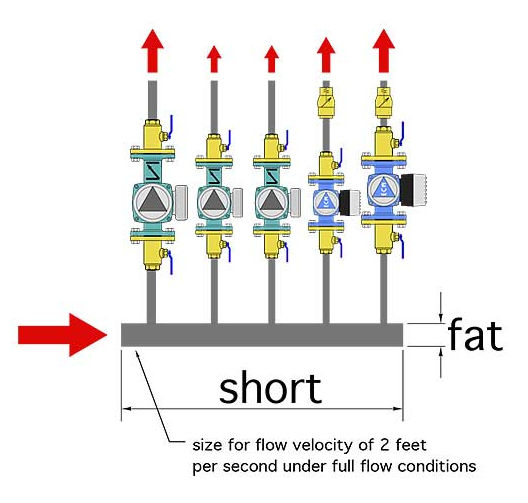 Selecting the header size based on this criteria might earn you some weird looks from installers who are less concerned about approaching ideal conditions, or more concerned about tradition.  But rest assured that you’re providing a detail that conserves pump head energy, and even helps contribute to good hydraulic separation of multiple circulators if they are supplied from that header.

Complete separation: Speaking of hydraulic separation, it’s a desirable trait in any hydronic system having multiple circulators that can operate at the same time. Good hydraulic separation is achieved by keeping the pressure drop in “common piping” that is shared by two or more circuits, each having their own circulator, as low as possible. The common piping could be a pipe, a tank, a heat source, a pair of closely spaced tees, a collection of piping components, or, not surprisingly, a device called a hydraulic separator.

“Treat your heat like your lights…”  That was a suggestion offered by Richard Watson at a Radiant Panel Association conference held many years ago. He was describing the ability of very low thermal mass “ENERJOY” electric radiant panels, manufactured by Solid State Heating Corp., to begin releasing radiant heat almost the same moment they were supplied with electricity, just like most light bulbs emit light the moment they are energized.

Imagine not having to maintain each room in a building at a normal comfort temperature just so you could be instantly comfortable if you happened to enter that room. If an instant output radiant panel could be created, the room could be maintained at a lower temperature when not occupied. This would reduce its rate of heat loss, and thus reduce the seasonal heating energy use.

A hypothetical hydronic heat emitter with no thermal mass could begin emitting radiant and convective heat the moment heated water passed into it. Such a panel could adjust its heat output to moment-by-moment changes in internal heat gains from sunlight, people and equipment. It would store very little heat when it’s time to put the space it serves into temperature setback. When the setback period ended, comfort could be restored instantly.

Again, we may never see a hydronic radiant with zero thermal mass, but there are currently available panel radiators that have less than 1% of the thermal mass of a 4-inch-thick heated concrete floor slab. They contain minimal amounts of water and metal relative to their heat emitting potential. Such panels can thermally accelerate and decelerate very quickly to compensate for changes in internal heat gains. They are an excellent choice in modern highly insulated buildings that are subject to variable internal heat gains.

Instant solar: A few years ago, we installed a grid-connect solar photovoltaic system at our house. I’m inspired by how rapidly the output wattage of this array changes as the array goes into and out of shading by a cloud. For all practical purposes, the array responds instantly to changing solar radiation conditions.

This is not the case with solar thermal collectors. There are definitely times when a solar thermal system fails to turn on to grab what might only be a few seconds worth of available solar radiation shining down between passing clouds. 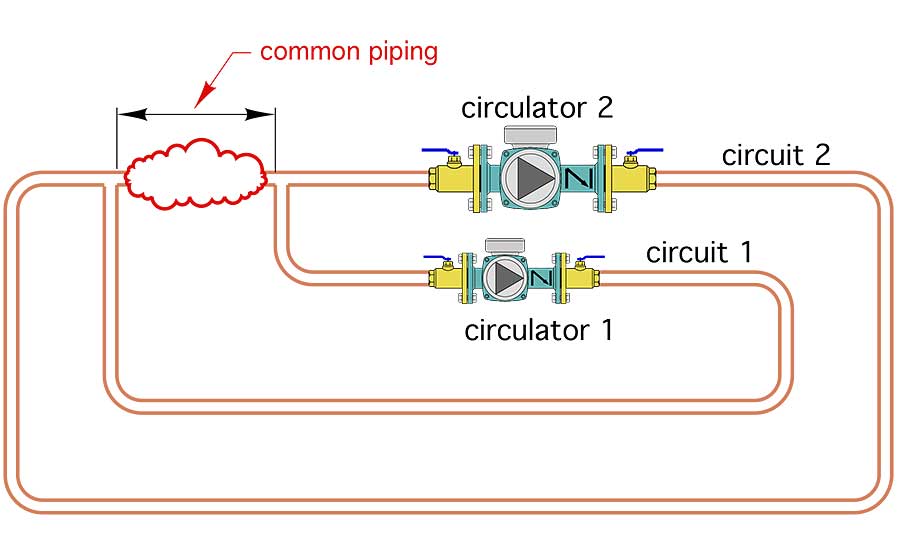 This happens because the collector’s metal absorber plate, and any fluid it contains, represents thermal mass that cannot be sufficiently warmed by a few seconds of solar radiation, at least to the point of activating a differential temperature controller.

But what if it could? What if someone created a solar thermal collector with an absorber plate having an extremely small thermal mass? Perhaps it would be built using carbon nanotubes or some other synthetic material that hasn’t yet migrated from the laboratory to the production line.  What if the enclosure around that absorber plate approached zero heat loss, and the glazing above the absorbed plate approached a perfect transmissivity of 1.00?

Such a collector could grab short bursts of solar radiation and instantly transfer it to a fluid stream.

This hypothetical solar thermal collector can’t be built, at least not with the materials and technology currently available. However, the concept should give us pause to consider how changes to current collector designs might provide benefits. For example, could we build a collector absorber plate with less material or with far less internal fluid volume? If we could, that collector’s ability to capture short pulses of solar radiation between passing clouds would improve. A better insulated enclosure would complement such an absorber.

Dream on: Imagine if no one thought that the Wright brothers’ first airplane could be improved upon or if it would be impossible to have a computer on a desktop much less on our wrist?  What if no one in the early 1900s had envisioned an electrically powered circulator to move water through a water heating system or had totally dismissed the future of hydronic radiant heating because some systems using metal piping embedded in concrete had sprung leaks?

The quest toward the possible starts by conceptualizing the ideal, and moving toward it, often in small incremental steps. It’s my hope that future practitioners of hydronic heating and cooling will look back on what we do today as acceptable for the time, but far from their state-of-the-art technology.

Keep striving for the ideals!