John Siegenthaler: Staying above the dewpoint

Use a ‘Thermal Clutch’ for boiler protection.

All boilers that burn hydrocarbon fuels (gas, oil or wood) produce water vapor as a byproduct of combustion.

About half of the fossil fuel boilers currently sold in the U.S. are “conventional” boilers with heat exchangers constructed of cast iron, steel or copper tube. They’re designed with the intent of being operated at conditions that do not allow this water vapor to condense, on a sustained basis, within a boiler’s heat ex-changer. It’s the same story with nearly all current-generation cordwood gasification and pellet boilers available in North America. They are not intended to op-erate with sustained flue gas condensation.

The two italicized words in the preceding paragraph deserve further attention. Just because manufacturers intend their boilers to operate at conditions that prevent sus-tained flue gas condensation does not mean that these boilers cannot condense. Given suitable conditions, any boiler can be a “condensing boiler.” While such conditions are desirable in modern boilers using appropriately designed heat exchangers and suitable venting systems, they can quickly scale and corrode carbon steel boilers, destroy steel vent connector piping, and cause severe damage to masonry chimneys.

The key to preventing sustained flue gas condensation is keeping the inlet water temperature above the dewpoint of the combustion gases whenever possible.

The word sustained is also important. All hydrocarbon-fueled boilers experience intermittent flue gas condensation following a cold start. It happens because the combus-tion side of the boiler’s heat exchanger is well below the dewpoint of the water vapor in the exhaust gas stream. However, a properly designed balance-of-system allows a conventional boiler to quickly warm its internal surfaces above dewpoint, and thus evaporate that initial condensation and prevent it from reoccurring over the remainder of the burn cycle. Short-lived intermittent flue gas condensation is not a problem.

The key to preventing sustained flue gas condensation is keeping the inlet water temperature above the dewpoint of the combustion gases whenever possible. Most “legacy” hydronic systems did this by selecting and sizing heat emitters that required water temperatures of 180º F or higher to dissipate the boiler’s rate of heat pro-duction. However, many modern hydronic systems, especially those using renewable heat sources, are designed around much lower water temperatures. In some cas-es, modern hydronic systems also contain components having much greater thermal mass compared to their finned-tube predecessors. A heated concrete floor slab is a good example, and so is a system with a larger thermal storage tank, such as found in solar thermal systems, or systems using cordwood gasification or pellet boilers.

Does this imply that cordwood gasification and pellet boilers cannot be used with low temperature heat emitters or high thermal mass systems? Absolutely not. There are plenty of options for mixing assemblies that reduce water temperature on the supply side of the system. However, as the North American hydronics industry sometimes painfully learned when radiant panel heating was resurrected in the 1980s, it’s just as important to pay attention to what’s happening at the boiler inlet.

A good example that some readers have likely witnessed is when warm water is circulated through a cold, concrete slab during a cold weather startup. Assume the slab is initially at 40º, and water at 110º is pumped into the embedded tubing circuits at the same flow rate that would be present at design load. Under such conditions, it’s not unusual for the water exiting the slab to be at perhaps 50º. That condition represents a temperature drop of 60º between the water entering the circuit, and the water returning from that circuit. That’s about three times greater than a typical design load temperature drop of 20º. Three times the ∆T at the same flow rate implies three times the rate of heat absorption. That cold slab is absorbing Btu from the water stream much faster than the boiler can reload them, even when that boiler is running at full capacity.

A thermal clutch is analogous to a mechanical clutch. The difference is that it regulates the transfer of thermal energy rather than mechanical energy.

To consistently protect a boiler from sustained flue gas condensation, a thermal clutch must provide both of the following functions:

Function #1: It must sense and react to boiler inlet temperature.

Function #2: It must allow the boiler’s heat output to be fully uncoupled from the load when necessary.

Two piping assemblies that have been used in North American hydronics for decades, and sometimes for the wrong reasons, are shown in figures 1 and 2. 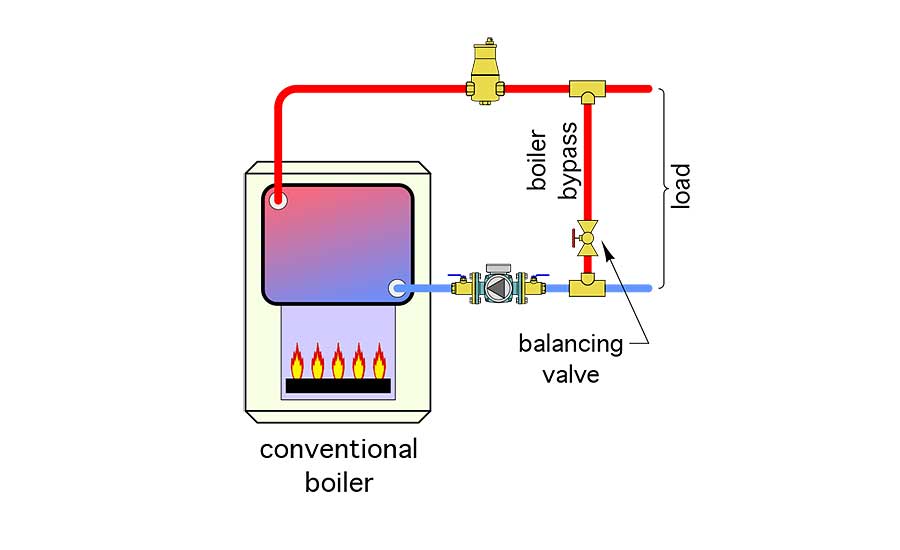 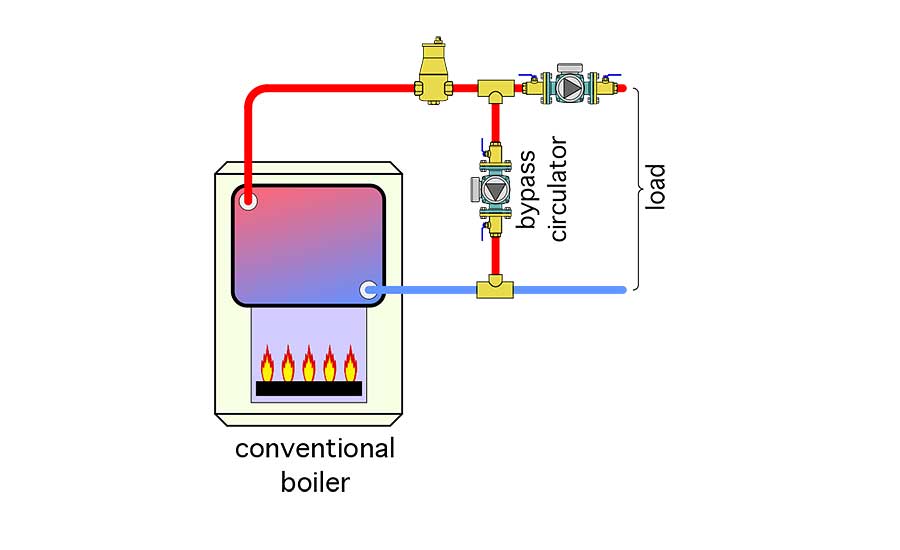 These piping assemblies are called “boiler bypasses.” The arrangement in Figure 1 bleeds what is assumed to be hot water from the boiler outlet through the by-pass pipe, forcing it to mix with cooler water returning from the distribution system. A balancing valve is used to adjust the bypass flow rate. The assembly in Figure 2 uses a dedicated circulator to create the bypass flow.

For decades, these piping assemblies often have been viewed as capable of passing sufficient hot water from the boiler outlet into the lower tee where it mixes with

water returning from the load to boost boiler inlet temperature above the dewpoint of the flue gases. In some systems — those with high-temperature/low-mass heat emitters, and generously oversized boilers — these piping assemblies usually worked acceptably well to limit flue gas condensation.

However, as hydronic systems have evolved toward low-temperature / high-mass characteristics, neither of these piping assemblies was able to satisfy the two previously stated and required functions. Neither could react to boiler inlet temperature, and neither could fully uncouple the boiler from the load when necessary.

For example, consider what would happen with either of these piping assemblies when the water temperature returning from the load was 95º. Assuming a typical boiler flow rate, the temperature rise across the boiler would be about 20º. That makes the “hot” water leaving the boiler 110º. Question: How do you mix 110º water with 95º water at the lower tee to produce the 130º water needed to prevent flue gas condensation? Answer: You can’t. It’s impossible. The bottom line: Boiler by-pass piping, as shown in figures 1 and 2, cannot consistently protect conventional boilers from operating with sustained flue gas condensation.

Given this deficiency, one might assume that making the boiler bypass circulator in Figure 2 (on Page 19) a variable-speed circulator that responds to boiler in-let temperature would remedy the situation. It would satisfy function #1, but not function #2.

Fortunately, a simple modification of the piping in combination with a temperature-regulated variable-speed “shuttle” circulator, can provide both functions needed to prevent sustained flue gas condensation. That modification is shown in Figure 3. 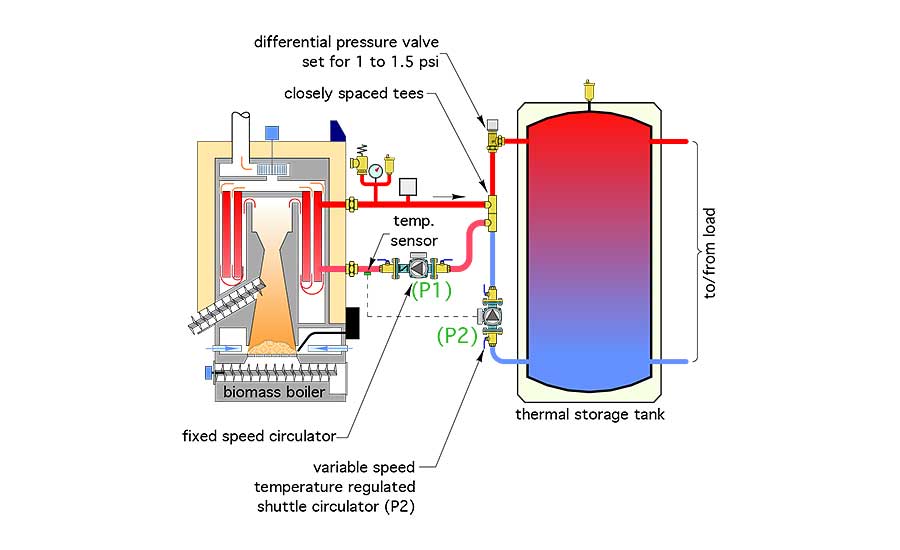 The load in Figure 3 is a large thermal storage tank. An example would be a multi-hundred-gallon tank heated by a pellet boiler or cordwood gasification boiler. When such a tank has not received heat for an extended period, it represents a very significant cool thermal mass.

When the boiler in this system is called to operate, circulators (P1) and (P2) are both powered on. Circulator (P1) establishes a fixed flow rate through the boiler. The variable-speed shuttle circulator (P2) monitors boiler inlet temperature. When that temperature is below a preset value (typically around 130º for gas-fired boilers or 140º for cordwood gasification boilers), the variable-speed shuttle circulator is powered, but its motor remains off or operates at minimal speed. Under this condition, the flow created by circulator (P1) does a U-turn at the closely spaced tees and returns to the boiler. This prevents all but a trickle of heat transfer between the boiler and load, effectively uncoupling the two.

The above description assumes that the shuttle circulator can be completely off when the boiler inlet temperature is below the preset threshold value. There are some circulators with integral temperature controllers, as well as circulators that can be regulated by external controllers, that will operate this way. However, some variable-speed circulators must operate at a minimum speed whenever they are powered, which would be anytime the boiler is called to operate. In this case, it’s important to have a device that provides some forward-opening resistance in the load circuit to prevent flow when the circulator is at minimal speed. A differential pressure valve, as shown in Figure 3, and set to a forward-cracking pressure of 1 to 2 psi, usually can provide this requirement, as shown in Figure 4 (on page 24). That valve also will fully close to prevent reverse thermosiphoning from the tank through the boiler piping when the boiler and circulators (P1) and (P2) are off, and thus replaces the need for a check valve. 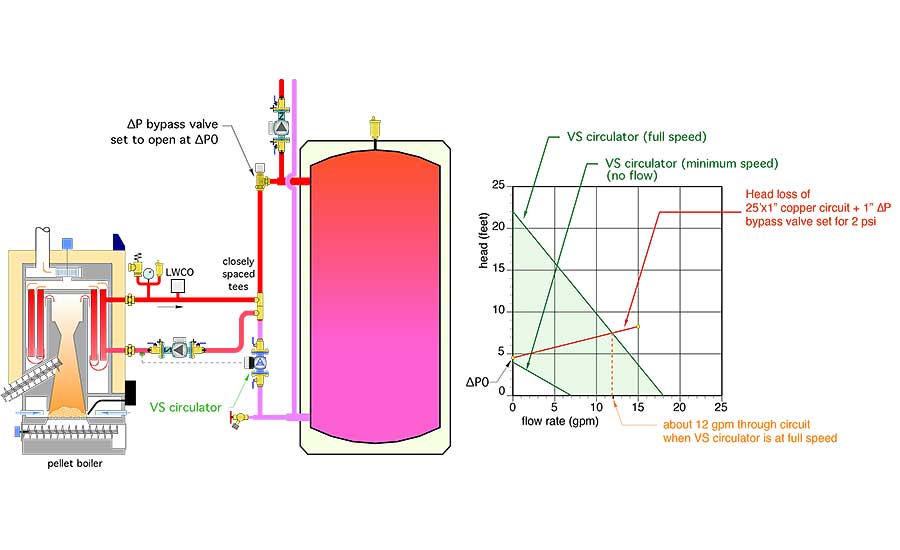 At present, differential pressure bypass valves are typically only available in pipe sizes up to 1.25 inches. In systems with larger piping, a motorized ball valve that opens when circulators (P1) and (P2) are on, and closes at other times, can be used in place of the differential pressure valve.

In addition to a variable-speed shuttle circulator, there are several other piping assemblies and associated controls that can protect conventional boilers from sus-tained flue gas condensation. They includes systems using motorized 2-way, 3-way and 4-way mixing valves, and systems with specifically configured thermostatic mixing valves. Designers contemplating use of such assemblies should remember that consistent boiler protection requires these assemblies to provide both of the following functions:

Function #1: It must sense and react to boiler inlet temperature.

Function #2: It must allow the boiler’s heat output to be fully uncoupled from the load when necessary.