What trait do solar-thermal collectors, hydronic heat pumps and thermal storage tanks supplied by biomass boilers have in common?

Answer: They all perform best when coupled to distribution systems that operate at low supply water temperatures.

But that’s not what’s waiting for these renewable heat sources in most North American buildings. It’s common to encounter situations where a modern “low-temperature” hydronic heat source is to be added to an existing system that was designed to operate at a relatively high temperature such as 180° F. Trouble is sure to follow if the installer just removes the original “box” that supplied this high-temperature water and drops the new renewable-energy heat source into its place.

For example, most current-generation water-to-water and air-to-water heat pumps only can produce water temperatures in the range of 120° to 130°. If saddled to a distribution system that was sized to release design load output at 180° average water temperature, the heat pump quickly will trip off on an internal high-temperature or high-refrigerant pressure limit, which typically requires a manual reset. The existing distribution system cannot dissipate the rate of heat input from the heat pump with a water temperature that’s 50° to 60° lower than what it was designed for.

The two fundamental ways to reduce the supply water temperature of any hydronic heating system:

A combination of these two approaches also is possible.

Figure 1 shows the supply water temperature vs. outdoor temperature for the original load as well as the reduced load after the building-envelope improvements were made. 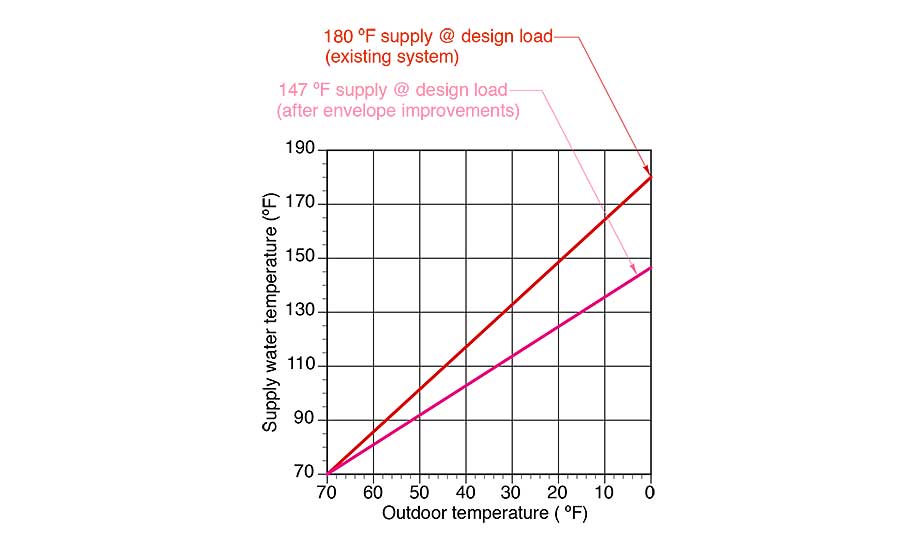 In this case, reducing the design heating load from 100,000 Btu/h to 70,000 Btu/h reduced the required supply water temperature from 180° to 147°. Although this certainly is an improvement, it still is substantially above what some renewable energy heat sources can consistently provide.

If reducing the design heating load of the building does not lower the required water temperature to the desired value, it will be necessary to add heat emitters to the system.

If the original system used finned-tube baseboard heat emitters, it may be possible to add more of the same emitters. Another option might be to change out some existing baseboard for “high-output” baseboard. It’s also possible to add different types of heat emitters such as panel radiators, fan-coils or select areas of radiant panels.

The choice of which type of heat emitter to add will depend on several factors, including:

Let’s proceed with the assumption that more fin-tube baseboard will be added. The following procedure can be used to calculate the amount of baseboard to be added to reduce the supply water temperature at design load to a predetermined value. It assumes the added baseboard is the same make and model as the existing baseboard. It also assumes the existing baseboard is a standard residential-grade product with nominal 2.25-inch square aluminum fins with a I=B=R-rated output of about 600 Btu/h/ft. at 200° water temperature.

Step 2: Determine the total length of finned-tube in the existing distribution system. Do not include the length of tubing that doesn’t have fins on it. The existing finned-tube length will be designated as Le.

Step 3: Determine the desired (lower) supply water temperature for which the system is to supply design load output. A suggested value is 120°.

Step 6: Determine the length of baseboard to be added using Formula 2.

Here’s an example. Assume a building has a calculated design load of 40,000 Btu/h, and its distribution system contains 120 ft. of standard residential finned-tube baseboard. It is currently heated by a conventional cast-iron boiler. The goal is to reduce the supply water temperature to 120° at design conditions using more of the same baseboard. Assume the temperature drop of the distribution system is 10°. Determine the amount of baseboard that must be added: 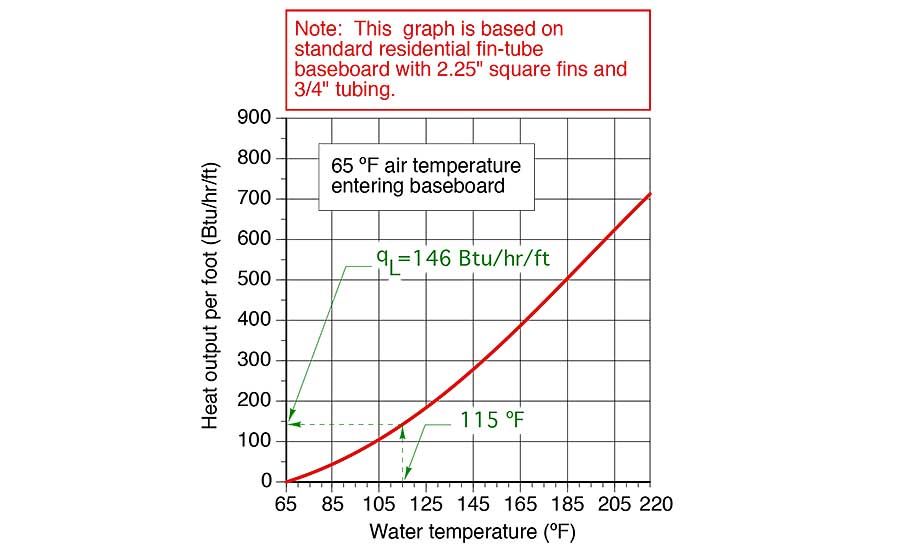 Step 2: The total amount of finned-tube in the system is 120 feet

Step 3: The lower supply water temperature at design load will be 120°.

Step 5: The output of the finned-tube at an average circuit water temperature of 115° is determined from Figure 6-10 as 146 Btu/h/ft.

Although it might be possible to add 154 feet of baseboard to the system, it would require lots of wall space. In most buildings, adding this much baseboard is not a practical solution. Alternatives include using baseboard with higher heat output or using other types of heat emitters to achieve the necessary design load output.

The steps of the previous procedure can be modified to determine the amount of high-output finned-tube baseboard that is required to reduce the supply water temperature to the system under design load.

Step 5: Determine the output of high-output baseboard at the average circuit water temperature using Formula 3 (or manufacturer’s literature for a specific make and model).

Step 6: The required length of high-output baseboard to add to the system is found using Formula 3. 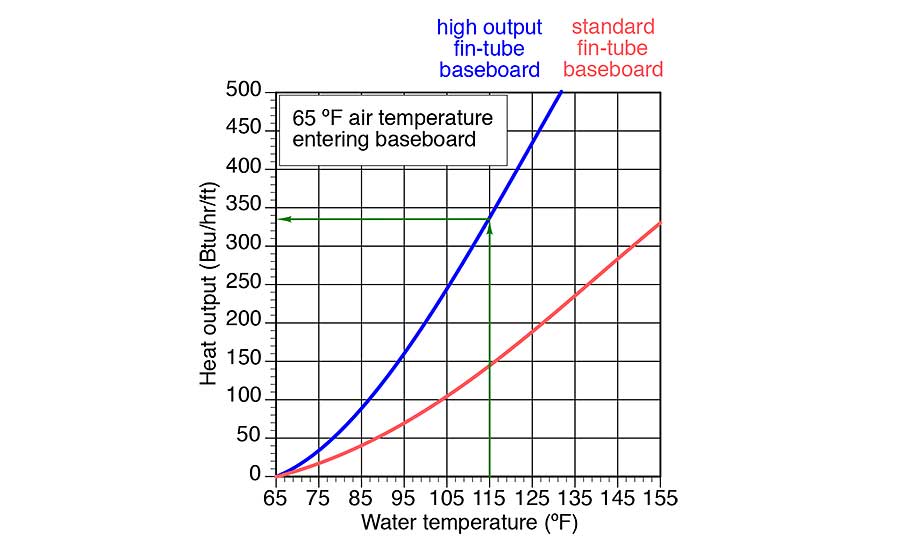 Step 2: The total amount of finned-tube in the system is 120 feet.;

Step 3:  The new lower supply water temperature at design load will be 120°;

Step 5: The output of high-output finned-tube at an average water temperature of 115º F is determined from Figure 7 as 335 Btu/h/ft.; and

Step 6: The required length of high-output baseboard to add to the system is found using Formula 3.

If the amount of finned-tube baseboard that needs to be added is beyond what can be accommodated, there are several other added heat-emitter options, including panel radiators, fan-coil, or areas of radiant floor, radiant wall or radiant ceiling panels. In each case, the selection of these new heat emitters should be based on a selected supply water temperature at design load along with a “credit” for the existing heat emitters in the system operating at the lower supply water temperature.  The fundamental concept is given by Formula 4.

The goal is to select a grouping of new heat emitters with a total heat output that’s about equal to the value of Qn in Formula 4.

Let’s work through another example. Assume a building has a calculated design load of 40,000 Btu/h, and its distribution system contains 120 feet of standard residential finned-tube baseboard. The goal is to reduce the supply water temperature to 120° under design-load conditions. Panel radiators are available in a 24-inch by 72-inch size that can release 4,233 Btu/h when operated at an average water temperature of 115° in rooms with 70° interior temperature. How many of these radiator are necessary to meet the design load?

First, use Formula 4 to determine the output required of the new radiators.

The number of radiators needed is then found as follows:

The designer could either add six of these panel radiators or choose a slightly higher supply water temperature and use five radiators.

Another option is to use panel radiators of different sizes provided their total output at the lower supply water temperature could meet the value of Qn. In this example the six new radiators would be combined with the 120 feet of existing baseboard to provide the 40,000 Btu/h design load.

A similar calculation could be made for fan-coils, air handlers or other heat emitters.

In the case or radiant panels, the designer needs to determine the output of each square-foot of panel based on the lower average circuit temperature and the specific construction of the panel. The total required panel areas is found by dividing this number into the value of Qn.

Once the amount of additional heat emitter is determined, designers can turn their attention to how it should be piped into the distribution system. We’ll cover that next month in part two of this article.

John Siegenthaler, P.E., is a consulting engineer and principal of Appropriate Designs in Holland Patent, N.Y. His latest textbook “Heating With Renewable Energy,” will be released in January 2016 from Cengage Publishing. It shows how to use modern hydronics technology to create systems supplied by solar thermal, heat pump and biomass heat sources. Additional information is available at www.hydronicpros.com.