This website requires certain cookies to work and uses other cookies to help you have the best experience. By visiting this website, certain cookies have already been set, which you may delete and block. By closing this message or continuing to use our site, you agree to the use of cookies. Visit our updated privacy and cookie policy to learn more.
Home » John Siegenthaler: Maintaining constant circulation in heated floor slabs is key
Market SectorsColumnistsJohn SiegenthalerRadiant/Hydronics

Heated floor slabs, without floor coverings, have one of the lowest supply water temperature requirements of any radiant panel system. This makes them well-suited for use with renewable energy heat sources such as air-to-water heat pumps, water-to-water geothermal heat pumps, biomass boilers and solar thermal collectors. The lower the water temperature at which the floor panel can adequately heat the building, the higher the efficiency of the renewable heat source. This also holds true for a mod/con boiler that might be present as an auxiliary heating device.

Bare heated slabs are very common in buildings such as vehicle service garages, fire stations and shop-type facilities. These buildings typically have one or more overhead doors. The slab areas just inside those doors experience higher rates of heat loss compared to other areas along the perimeter of the building, especially if there is no insulation between the edge of the slab and the outside pavement.

If the system is controlled by turning the flow through the floor circuits on and off in response to a thermostat, there will likely be times when the floor area just inside each overhead door cools substantially below the temperature of slab farther inside the building. In a scenario where flow is off for several hours during extremely cold weather, it’s possible for water in tubing just inside the overhead door to freeze. This could happen due to a thermostat failure, a circulator failure or even a “deep” thermostat setback such as from 65° F to 50° F. Aside from the freezing issue, the cool floor areas take longer dry, and might even allow the sealing strip at the bottom of an overhead door to freeze to the slab.

One “solution” to the freezing issue is to use antifreeze in the entire system.  This works, but it’s expensive, especially in these inflationary times. It also doesn’t solve the issue of the floor area inside the overhead door cooling below the floor temperature in the interior areas of the building.

A better alternative is to maintain constant circulation through all floor circuits, even when no heat is being added to the slab from the system’s heat source. Constant circulation helps in redistributing heat from the interior “core” areas of the building to the floor areas adjacent to the overhead doors. That “Robin Hood” effect for Btu leverages the full thermal mass of the slab to delay potential freezing of perimeter floor circuits, especially portions of those circuits just inside overhead doors.

For buildings with electric heat sources such as heat pumps or electric boilers, a small emergency generator that’s sufficient to keep the circulators running — but not the heat sources — provides a generous (multi-day) safety factor against freezing in the event of a power outage. I’ve witnessed this first hand in the case of a wintertime roof collapse at a building with slab heating in upstate New York.

Fork in the road

One way constant circulation can be accomplished is through use of a three-way diverter valve as shown in Figure 1. 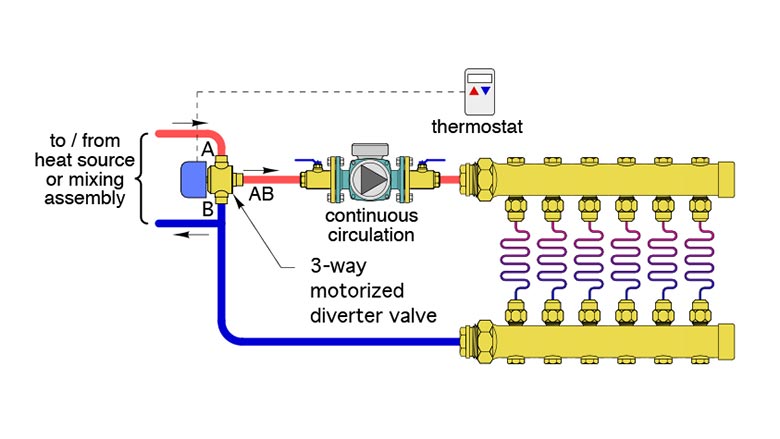 In this arrangement, the circulator operates continuously throughout the heating season while heat input is regulated by a thermostat or other zone controller.

When heat input is needed, the diverter valve is powered on, typically by a 24-VAC signal from a thermostat or other zone controller. Flow passes into the “A” port of the valve and out through the “AB” port. No flow passes through the “B” port.

The piping shown in Figure 1 assumes that the temperature of the water supplied to the floor circuits is controlled “upstream” of the diverter valve. This would typically be the case when heat pumps or a mod/con boiler serves as the heat source. However, if a conventional boiler, a storage tank supplied by a biomass boiler or solar thermal collector provides heat, a mixing assembly of some sort needs to be used upstream of the diverter valve. Common mixing assemblies are designed around a 3-way motorized mixing valve, a 2-way modulating injection valve or a variable speed injection circulator.

Another option, in a single zone system, is to connect the distribution circuit to the heat source through some means of hydraulic separation. A pair of closely spaced tees can do this. So can a hydraulic separator. The latter would also provide air, dirt, and, in some cases, magnetic particle separation. Figure 2 shows these two options. 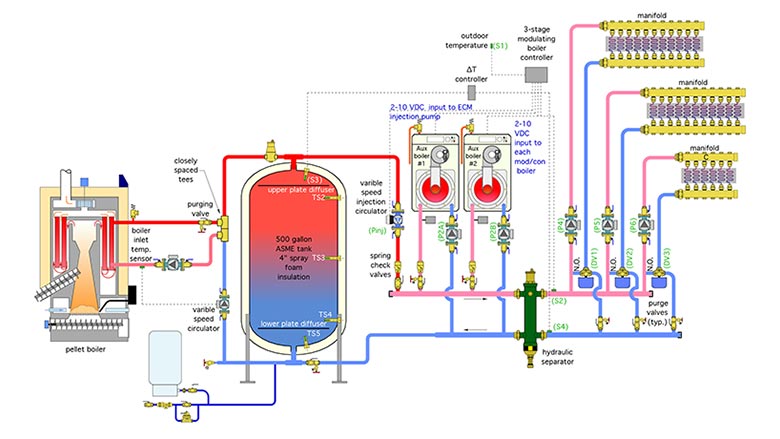 All the manifold stations are set up with diverter valves to enable constant circulation through the floor circuits, while still allowing for three independent heating zones. It’s just an extension of the concept shown for a single manifold station in Figure 1.

The pellet boiler operates as necessary to maintain the temperature in the thermal storage tank between a high of 180° F, and a low of about 110° F. Its operation is completely independent of the load on the system. A variable speed circulator that changes speed in response to boiler inlet temperature is used as an “anti-condensation” device for the pellet boiler.

Hot water from the top of the thermal storage tank is injected into the heat source header by a variable speed circulator (Pinj). The speed of the injection circulator is controlled by a 2-10 VDC input from a multi-stage modulating boiler controller. That controller is set to provide a supply water temperature based on outdoor reset control, at sensor (S2), located on the distribution side of the hydraulic separator.

The injection circulator is only allowed to operate when the water temperature at the top of the thermal storage tank is a few degrees warmer than the water returning from the manifold stations. This logic is handled by a simple differential temperature (∆T) controller, or equivalent BAS programming. It prevents the possibility of heat supplied from the auxiliary boilers being inadvertently shuttled into the thermal storage tank.

The hydraulic separator, combined with short and generously-sized header piping, isolates the pressure dynamics of the injection circulator from the boiler circulators, as well as from the constantly operating distribution circulators.

A thermostat in each of the three zones controls the associated diverting valve to determine if flow is recirculated (e.g., no heat input) or supplied from the hydraulic separator at the necessary target temperature (e.g., heat input).

Maintaining constant circulation in a slab-type floor heating system, especially one in a vehicle garage or shop-type building where overhead doors are present, is, in my opinion, a much preferred option to on/off flow control combined with antifreeze.

When the supply water temperature is being regulated by a properly set outdoor reset control strategy, the distribution circulator, by implication, should remain on continuously.

Using a high efficiency ECM distribution circulator and judicious design for flow rate and head loss will minimize electrical power consumption. One could even argue that the electrical energy used to run that circulator ultimately becomes a small heat input to the building.

Whether the heat source runs on fossil fuel, renewable energy or a combination, constant circulation in heated slab buildings is proven strategy that’s appropriate for many garage or shop-type buildings. Use it to put a final “polish” on an already superior comfort system.