A commonality among all renewable energy heat sources is that they perform best when coupled to low-temperature hydronic distribution systems.

Operating water temperature differences of 5 to 10º F can have a major effect on the COP (coefficient of performance) of geothermal water-to-water heat pumps as well as air-to-water heat pumps. Operating a flat-plate solar collector at an inlet fluid temperature of 110º rather than 170º can double the amount of solar energy it collects under clear skies on a cold by clear winter day.

Being able to lower the water temperature of a thermal storage tank at which a pellet boiler is turned on can significantly increase its overall thermal efficiency and reduce its emissions. Bottom line: If you’re serious about achieving good performance from renewable energy heat sources, you have to do everything possible to reduce the water temperature of the heat emitters supplied by that heat source.

One of the best low-temperature heat emitters is a bare concrete slab with embedded tubing. With tube spacing of 9 to 12 inches, good underside insulation, and a reasonably low-design heating load per square foot of heated floor, it’s possible to keep interior spaces very comfortable using supply water temperatures of 100º or less, even on a cold winter day.

Unfortunately, there are plenty of heated concrete slabs that, due to one often-dismissed detail, are not optimized for the lowest possible operating temperature.  That detail is tubing depth within the slab. Many of you have likely witnessed this compromise in the making as neatly placed tubing circuits get buried in concrete.  Sometimes the tubing and reinforcing mesh it’s attached to gets lifted into the thickness of the slab as the concrete is placed. Other times, the masons trample over the tubing and mesh as if it’s not even there.

Unlike relocating a sensor or redoing a soldered joint, there’s no chance of changing tubing depth once that screed slides over the concrete. The slab’s performance over decades of future service is now literally and figuratively “set in concrete.”

There are several ways that tubing depth should affect the performance of a heated slab:

After considering these points, it is somewhat intuitive that placing tubing higher in the slab should improve its performance. The harder questions to answer are:

The answers to these questions require credible numbers. One way to get them is by using specialized software to perform something called finite element analysis. FEA software allows a physical situation to be mathematically simulated. The calculations this software can do in a couple of seconds are many orders of magnitude beyond what any person could attempt to solve using manual methods.

One of the FEA models I constructed is shown in Figure 1 (on Page 14). It consists of a 4-inch concrete slab sitting on 1-inch-thick extruded polystyrene insulation (R-5 ºF•hr•ft2/Btu), and covered by 3/8-inch oak flooring. The latter is assumed to be perfectly bonded to the top of the slab. The tubing is assumed to be spaced 12 inches apart. 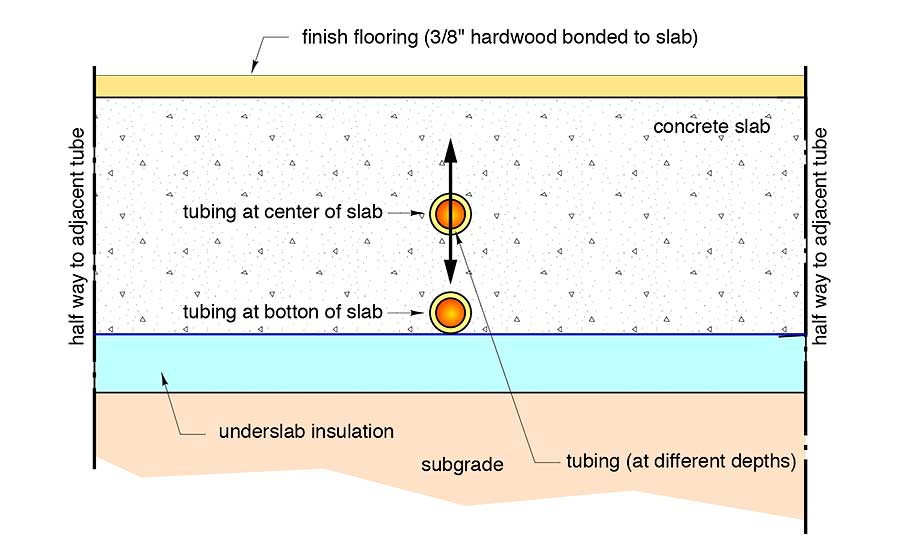 Several variants of this floor cross section were used to simulate tubing at different depths, with all other conditions being the same. Each time the model was run, it determined the temperature at hundreds of points within the small region of the slab shown in Figure 1, including points spaced 1/2-inch apart along the floor surface.

Figure 2 shows the isotherms (e.g., line of constant temperature within the slab and surrounding materials) that are generated by the FEA software. 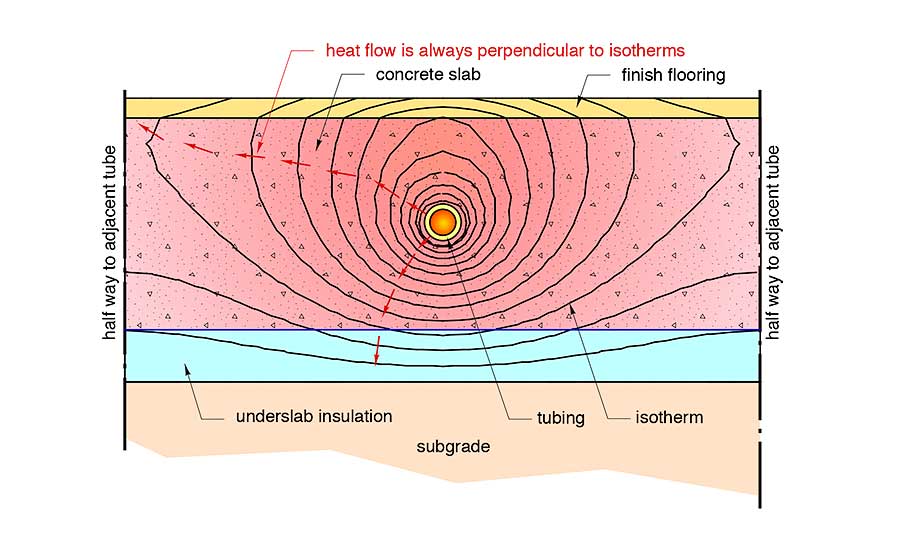 The results of the FEA simulations showed the following trends as the tubing was placed deeper in the slab:

Using the temperature data from several simulations, I estimated the heat output from the system for water temperatures in the tube of 100º and 130º. In each case, heat output increases as the tubing is lowered through the upper portion of the slab, and then decreases as the tubing gets deeper. This implies there is an optimal tube depth where the slab delivers maximum heat output. The simulations I ran suggest it is about 1/4 of the slab thickness down from the slab surface. However, this depth is likely to vary depending on finish floor resistance and other factors.

I used the FEA results to determine the average water temperatures required to deliver heat outputs of 15 and 30 Btu/hr/ft2. The results are shown in Figure 3.

The upward heat flux of 15 Btu/h/ft2 would represent a modern building, such as a house, with 2,000 square feet of heated slab area and a corresponding design heat load of 30,000 Btu/h. Such a load is easily attainable using modern building techniques, and might even be close to “code minimum” construction in some jurisdictions based on current or soon-to-be energy codes.

In the days when heated slabs were typically supplied from conventional boilers, the increased water temperature associated with tubing at the bottom of the slab was easily attainable with minimal changes in boiler efficiency. Just turn up the temperature setting of the mixing device between the boiler and slab circuits.

However, when the heat source is a solar thermal collector array or heat pump, this change in required water temperature has a much more pronounced negative effect on efficiency. 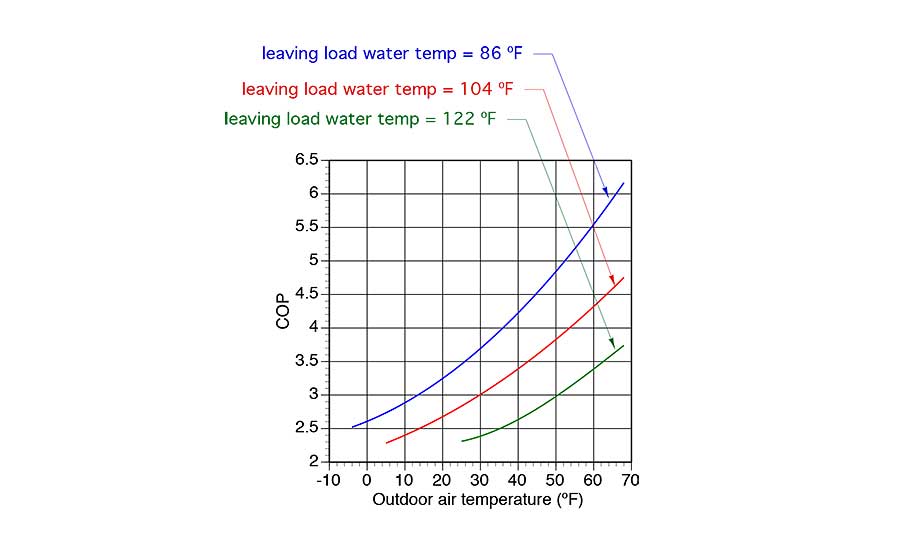 I also wanted to see how tubing depth effects heat output for uncovered concrete slabs. The FEA model was modified to turn the 3/8-inch oak flooring into 3/8-inch-thick concrete and the simulations were rerun. The results for upward heat output at a water temperature of 100º are shown in Figure 5. 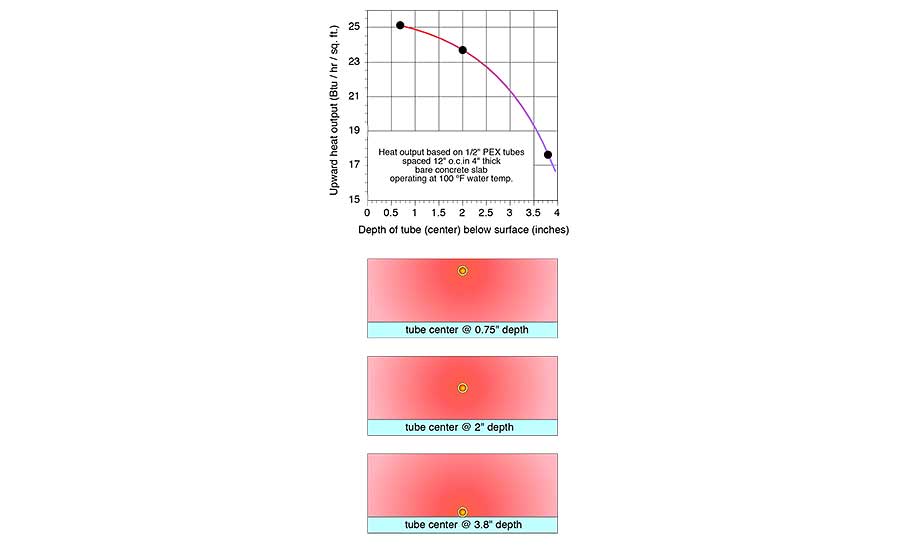 The results again show that heat output decreases as the tubing is placed lower in the slab. The highest output for the simulations I ran occurs when the tube is centered about 3/4-inch below to slab surface (about 25.1 Btu/h/ft2 at 100º water temperature). Lowering the tube so that its center is 2 inches below the slab surface (e.g., tubing centered on 4-inch slab thickness) reduces output to 23.8 Btu/h/ft2. These changes are relatively small. However, look at what the simulation predicts when the tube is located at the bottom of the slab. Here, the output is only 17.8 Btu/h/ft2. That is a 25% decrease in upward heat output compared to when the tubing is centered in the slab’s thickness. The only way to compensate for that drop in heat output is to increase water temperature several ºF.

I also looked at downward heat loss as a function of tubing depth. When water temperatures are adjusted (as shown in Figure 3 on Page 15) to allow tubing placed at the bottom of the slab to produce the same upward heat output as tubing centered in the slab, downward heat loss increases by about 10% .

There are factors other than thermal performance that have a bearing on tubing depth within a slab. One of them is protecting the tubing near sawn control joints.  The depth of such saw cuts is typically 20% of the slab thickness. I prefer to keep the tubing near the bottom of the slab at such locations to give the blade a wide berth as it passes over.  A typical detail is shown in Figure 6. 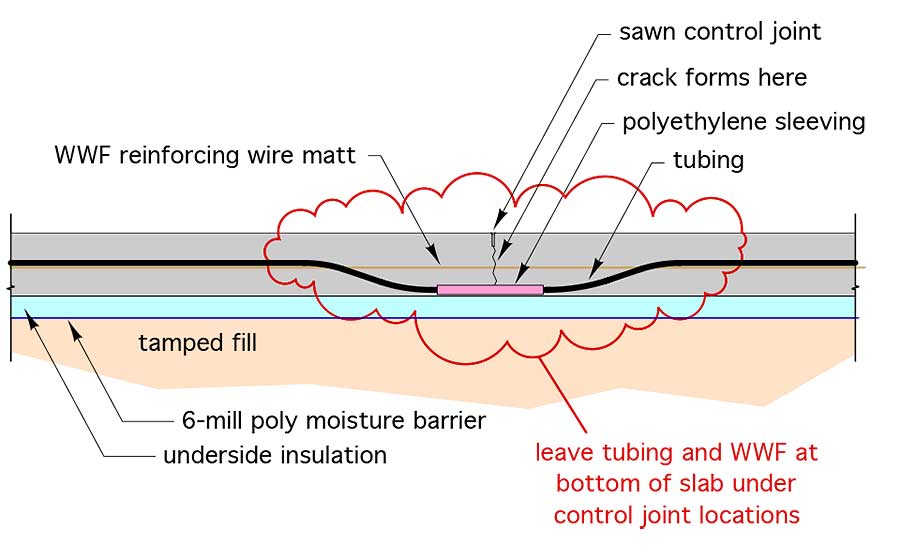 Another consideration ix penetrations by fasteners used to secure equipment to the slab. In most cases, it doesn’t make sense to leave all the tubing at the bottom of the slab just to accommodate what might be a future bench or lift post.  Find out where such equipment will be placed and keep the tubing several inches away from where the fasteners are likely to go. Block out and note these areas on your tubing layout drawing. Be sure to leave a copy of this plan with the building owner.

What does this mean?

Is finite element analysis guaranteed to predict reality with 100% accuracy? No.  There are hundreds of possible variations on factors such as soil temperature, flooring resistance, tube spacing, etc., that make it hard to draw generalized conclusions based on a few simulations

Still, for the limited simulations I ran, the predicted upward heat outputs agreed fairly well with other sizing tools used for system design. The predicted increase in water temperature required for tubing at the bottom (rather than the center) of the slab is both believable and significant. The 10% increase in downward heat loss caused by higher water temperatures in bottomed-out tubing also seems reasonable.

Keep in mind these results also are based on steady-state conditions. They don’t predict the consequences of the longer response times associated with deeper tubing. In buildings with significant and often unpredictable internal heat gains, this longer reaction time will surely lead to wider temperature swings and compromised comfort.

Why go to the effort and expense of using renewable energy heat sources, and needlessly compromise their performance by not being specific about how deep the tubing needs to be placed in the slab? Be sure to make your requirements clear in plans and specifications. It’s also worth having a discussion of these requirements with the “accountable” person overseeing the concrete placement crew. Make sure they understand that tubing depth does make a difference in system performance.  Do this several days before the pour, not while the first concrete truck is backing down the driveway, so there’s no excuse for being unprepared.

To read Siegenthaler’s article: “Be explicit on tubing depth in a slab” in pdf form, please see here.