Tanks or no thanks.

Quite frequently I get phone calls and emails requesting sizing help for projects. Many times, they are the common straightforward applications for a restaurant, office building or hotel. These ones feel repetitive, which often make me feel like Phil Connors played by Bill Murray in the movie “Groundhog Day.” You know the movie where he wakes up on the same day over and over to a 6 a.m. alarm with the song “I got you, babe.”

And then there are those that are a bit strange, slightly challenging, and best of all, humorous. Here's an example I experienced recently with a designer faced with the task of solving a small industrial domestic hot water application.

A hot water system designer, I shall call “Bob” has worked with gas-fired storage tanks and boiler and storage tanks for at least a decade before I learned of gas-fired tankless products myself — dating back to 1988.

I reply, “I'm going to need a little more information. For example, how long will this continuous flow be?”

“Oh yeah, plan on it being for one hour,” Bob replies.

I respond, “No, it won't work with two tankless and about 240 gallons of storage. You’re going to need more Btu.”

Bob says, “The contractor doesn't want to use more than two tankless. If we can't say the tankless will work, he says he will just use a different option.”

“It does not matter what type of equipment he uses, it won't work with the same amount of Btu and storage,” I reply. 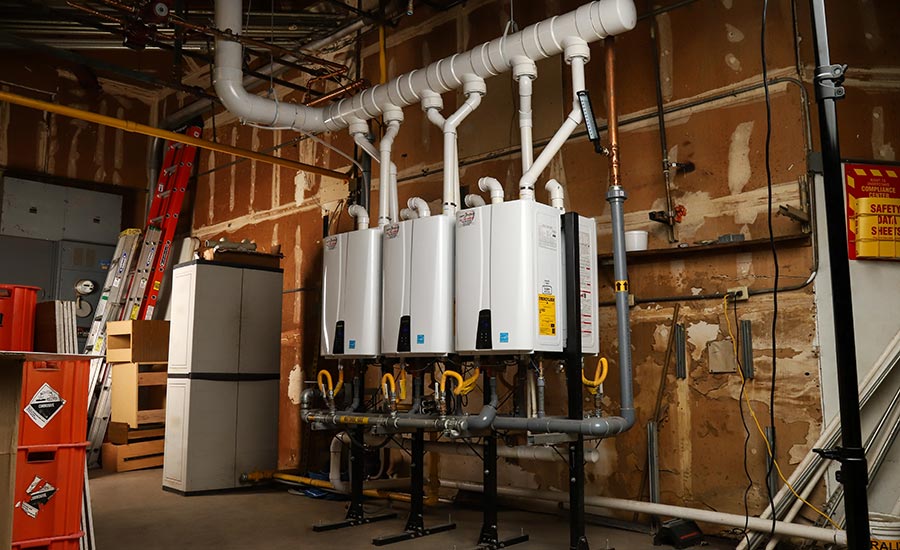 I respond, “240 gallons at 20 gpm will give up its acceptable stored temperature in about nine minutes, right? Two 199,000 Btu tankless heaters once fired only recover about 8 gpm at a 100° rise. So, I'd say somewhere around 11 minutes continuous draw, and you’re out of hot water.”

Bob replies, “Oh, OK. How about adding more storage to give me 20 gpm for one hour?”

“At that gpm requirement, your choices are a whole lot of storage —like 1,200 gallons. Or, what makes more sense, is to add more Btu. And Bob, we have not begun discussing how much recovery time will be needed to replenish tank temperature before the next continuous 20 gpm draw,” I say.

Bob then asks, “If they go for it, what do you suggest? How many tankless do I need with 240 gallons of storage?”

“Bob are you starting to see why storage is so often not needed? A single condensing tankless basically costs the same as a non-ASME storage tank. Two tankless units with two tanks, controls, piping, pumps and wiring would cost more than the five tankless water heaters. Since the sizing is so close, and we don't have more information such as system pressure, I suggest six tankless, no storage and we will have all the 20-plus gpm continuous flow they would ever need. And by the way, we haven't even begun to talk about the operational efficiency reduction from published efficiency stats when tankless is used with storage. A few factors to consider, but without the tankless in a storage application not supplied with the coldest water all the time, we won’t have a condensing appliance in condensing mode.” 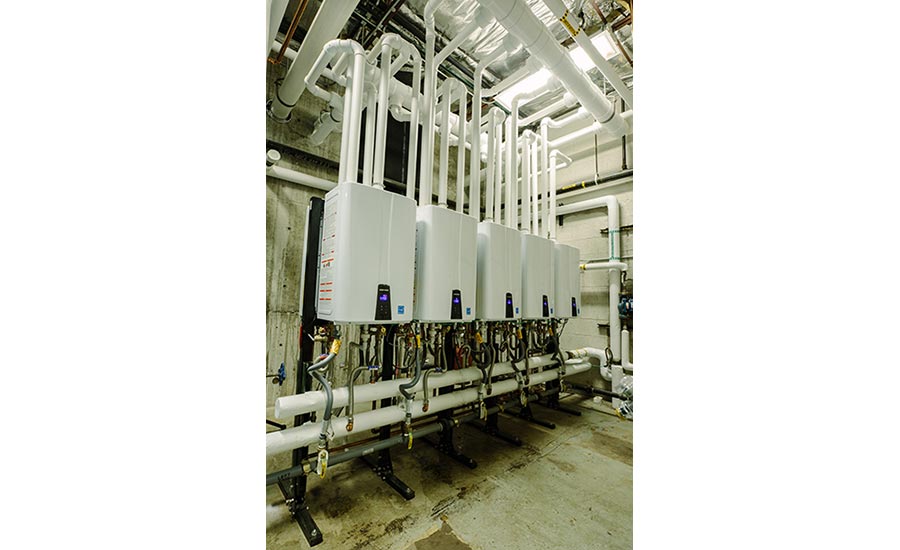 The first rule to remember is tankless water heaters are not boilers. Tankless water heaters are rarely sized on gallons per hour or gph as direct-fired tanks or boilers with indirect heated storage tanks are. For that reason, for replacement of existing hot water systems, selecting appropriate tankless units and how many is not as simple as saying, “I have a 399,000 Btu, 100-gallon tank that is leaking, how many tankless units do I need?”

Why do people use storage tanks with tankless units? When modern, improved and high-efficiency tankless units were introduced, wasn’t it the goal to eliminate tanks and increase water heating efficiency?

In my past experiences and involvement with the tankless industry, I’ve discovered the two reasons storage tanks are most often applied to tankless domestic hot water systems. One, the confusion of the tankless being and acting like a boiler, and two, the inability or lack of confidence to let go of the often-unneeded storage tanks. Let’s face it, those old habits die hard, and those insecurities are all nestled into our designer’s minds.

Now there are some legitimate reasons to apply storage to tankless water heating systems, such as space, high demand dump loads and insufficient gas Btu services, but for the sake of high-efficiency water heating, if we can ditch the storage, we can offer the best and most efficient domestic hot water system. 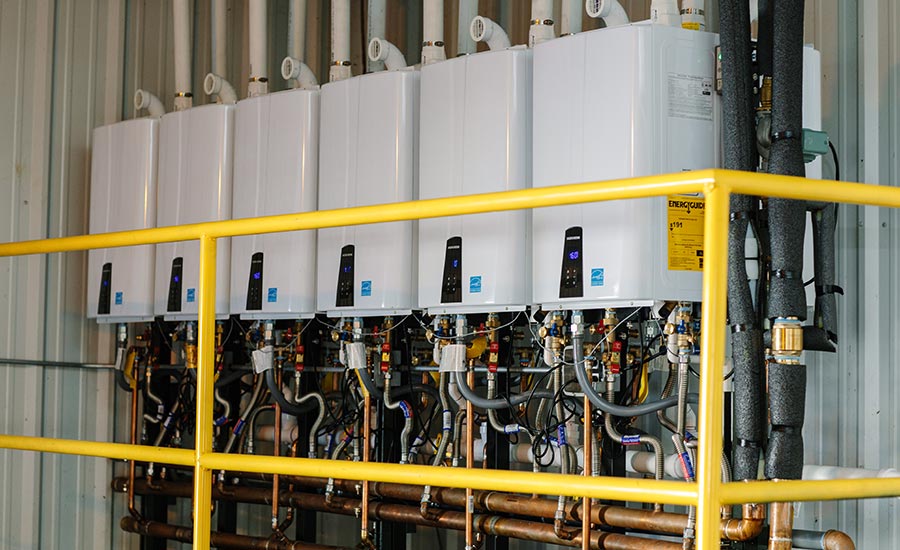 It’s important to know some design criteria you should be aware of when selecting and designing a tankless domestic hot water system. This information is especially crucial if the desire is to apply tankless units with storage tanks that require an external pump. Tankless water heaters, in their early conception, were not originally intended to have an external source of forced flow created by an external pump. Originally, tankless water heaters and their inner workings were expected to see intermittent, varying flows as determined by infrequent fixture demands. While they often see 3 gpm flows, on occasions they could also see sporadic 5 to 9 gpm flows. Most quality tankless units can handle these high flows, but not on a constant basis. And that’s where caution needs to be applied when pumping through a tankless water heater for not only storage applications, but domestic hot water recirculation as well.

In most cases, exceeding 4 gpm on an excessive or constant basis with elevated water temperatures will result in premature failure of tankless components, no matter who the manufacturer is. Tankless water heaters are designed for normal, average use flows in the 1 to 6 gpm range, and the occasional up to 11 gpm, depending on temperature rise required. Exceeding 4 gpm on a constant basis — such as a pumped operation operating 12 plus hours a day — results in excessive acceptable velocity in the waterways of all brands of tankless water heaters heated in a serpentine manner and/or have smaller internal waterways and components. Of course, the material used in the heat exchangers and the make-up of the waterway components will also have a detrimental effect on its length of service.

But wait, only 4 gpm is recommended or allowed? What about the tankless literature that states 9 to 11 gpm? With most storage applications using a tank aquastat(s) set at 140° to 145° to operate the circulator to create the flow between the tankless unit and the storage tank, there is no need to exceed 4 gpm. Four gpm through a single 199,000 tankless water heater raising the water temperature to 100° will drive a tankless unit to almost 200,000 Btu — its maximum Btu capacity. Going beyond that is just extra wear and tear on components, and will likely cause the internal waterway flow control valve to throttle the flow rate anyways.

With proper piping design and installation, it’s not really a storage tank, but a booster tank used simultaneously with instantaneous tankless operation, but that’s an explanation left for an additional article!

All photos courtesy of Navien.

Brian Fenske is the director of commercial business at Navien.

Getting personal with tankless water heaters