A history lesson on the two profitable sides of hydronic heating.

Steam and hot-water heating joined hands a long time ago to make up what we today call “hydronics.” Both systems run on water, and they’ve been around for hundreds of years. The Institute of Boiler and Radiation Manufacturers coined the term hydronics in 1946 to make the science of heating a building with water sound sexy — like “electronics.” That word — electronics — has been with us since 1900 and was all the rage in the booming years just after WWII.

Most hydronic systems are probably older than your parents and have seen changes throughout the years. The result of some of these changes has been painful because now everyone gets to work on hydronics; system knowledge is not a prerequisite. A lot of this stuff got made up as they went along. Where to place the circulator when it finally showed up? How to size a radiator? How to rate that radiator?

That last question has a delicious history. Nowadays, we use the term Equivalent Direct Radiation, or EDR for short to rate radiators. It wasn’t always that way. The first radiators were flat, iron boxes. Back then, they measured how much heat came off each square foot of flat surface and called it (not surprisingly) One Square Foot of Radiation.

But as time went by, things didn’t go as planned. The folks selling radiators found they were having a tough time convincing the women of the house that they needed these sheet-of-plywood-sized radiators hanging on their walls. I read about that in a very old book. Sales were tough because when Mama’s not happy, nobody’s happy. It's as true then as it is now.

So our forefathers began making radiators that were smaller and more attractive. But, the challenge was surface area. They needed more of it, and they solved the problem by wrapping wire around the radiator pipes. That gave the air more hot places to touch as it moved by convection across the radiator.

But how do you measure the square footage of a radiator that is no longer flat? These new ones had more nooks and crannies than an English muffin.

They thought about this for a while and some person, whose name is lost to history, came up with a brilliant solution. He got a large vat and filled it with paint. He weighed the full vat and then dunked the radiator into the paint, allowing the paint to flow freely over the hydronic English muffin. Then he hoisted the radiator out of the paint and let the excess dribble off.

Next, he weighed the vat again. Whatever was missing was clinging to the outside surface of the radiator. Brilliant. Now all he had to do was use that much paint, by weight, and paint the floor. However, the square feet of floor space he could cover with paint became the radiator's square-foot rating.

I don't know if he used a brush or a roller for the paint job, but that's how we got the term Equivalent Direct Radiation.

Years later, others came up with better ways to measure EDR. They weighed the condensate for steam radiators and analyzed flow rates and temperature drops for hot-water radiators.

I will forever think the paint guy was cleverer.

Some radiators work with both steam and hot water, but the EDR output will change because steam is hotter than what we commonly use in a hot-water system. The standard output for a steam radiator is 240 Btu per square foot EDR. That rating applies only when the surrounding air temperature is 70° and there's 1-psig steam inside the radiator. But if you run that same radiator with an average hot-water temperature of 170°, the output drops to just 150 Btu/h per square foot EDR. The cooler the stuff inside, the less heat goes to the outside. Keep that in mind if you're thinking about converting a system from steam to hot water.

One of the nice things about steam is that it's a gas that has no noticeable static weight. That’s not true for water. The higher you stack it, the greater the pressure gets down there at the bottom. This is why you'll see steam radiators in structures like the Empire State building. Height matters when it comes to water weight. In even taller buildings, such as One World Trade Center (a.k.a. The Freedom Tower), they use steam, but not radiators. They transfer the steam’s latent heat to shell-and-tube heat exchangers, placed strategically throughout the tallest skyscraper in the United States. Each heat exchanger connects to an independent hot-water system that serves vertical floors, but not enough to make static pressure an issue. The steam comes from Consolidated Edison, the largest steam district-heating system in the country.

Oh, and steam is fast! The design velocity in most steam-heating systems is 60 mph. In the typical hot-water system, the water chugs along at about 4 mph. You could probably walk that fast.

Steam is lighter than air, and air is lighter than water. That makes a difference when we compare the two sides of hydronics. When steam enters a radiator, it wants to go right to the top. That’s why on one-pipe steam systems, we put the radiator air vent halfway down the radiator on the side opposite the supply valve. This is to keep the steam from immediately shutting the air vent too quickly. We want to give the steam a chance to work its way into more of the radiator, and where there is air, steam will not go.

In a hot-water system, the water flows by pressure differential and the lighter air will go along with it, often getting trapped at the top of the radiators, which usually don’t have automatic air vents. It’s best to catch that air at the boiler with a good air separator. That’s where the water is hottest. Hot water can’t hold as much air in solution as cold water. Another plus for steam is it doesn’t need an air separator.

There's also no need for circulators with steam. When steam forms at 0-psi pressure, it expands 1,700 times. That’s what makes it head for the radiators. It’s looking for air vents. These days, we're looking to save electricity so we're using a lot of smart pumps that ramp down when zones close in a hot-water system. The slower speed of the ECM motor saves money, sure, but steam moves by itself. The only thing standing in its way is air, and if you balance the venting, the steam will move from the boiler to the radiator at highway speed. 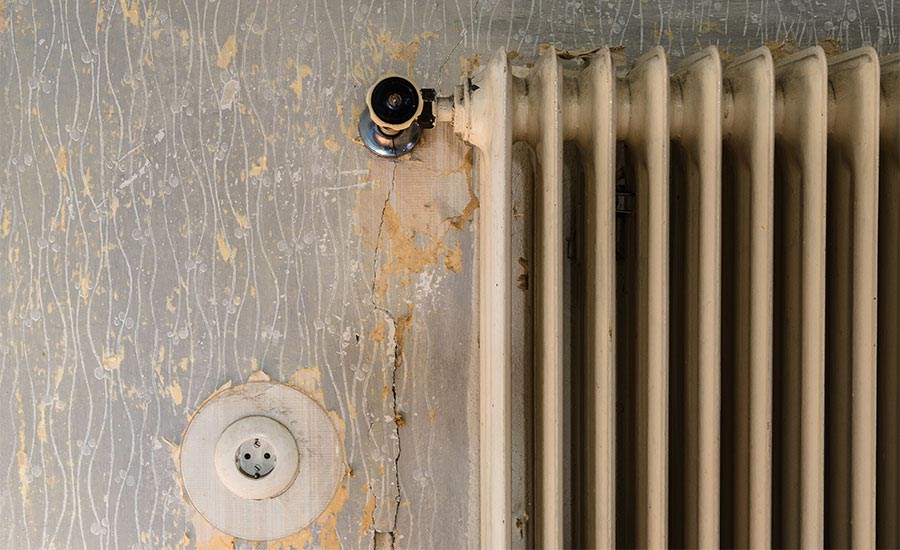 Steam systems also take advantage of latent heat, which you can't measure with a thermometer. To change one pound of water to steam, you have to first get the water to 212° F and then add 970 more Btu. What you wind up with is steam at the same temperature, but 1,700 times larger than it was as a liquid. It races out of the boiler and toward the radiators, condenses, and gives back that latent heat. Hot-water systems use only sensible heat, so pound for pound, steam wins this one every time.

And just so you know, the Empire State Building gets by with about 1 1/2-psi steam on most days. It’s not about pressure, it’s about heat transfer.

An event that affected both sides of hydronics took place after the 1918-1919 Spanish Influenza pandemic killed 50-million people. The Board of Health in the U.S. mandated that people leave their windows open during the winter because that flu virus was airborne. You couldn’t have enough fresh air in those days. I learned about this while reading heating texts written during the 1920s. The books refer to the Fresh Air Movement, which made no sense to me until I learned about that horrible pandemic. This is why both steam- and hot-water radiators of that era tend to be so oversized.

The Great Depression arrived and people began to close their windows. Those oversized radiators now put out way too much heat, so the National Bureau of Standards ordered a study and learned that if the top coat of paint on a radiator was aluminum-bronzing, the radiator's output would drop by 20%. And if you paint over the aluminum-bronzing with, say, black paint, the rating goes back to what it used to be. This is why most radiators of that time have that silver color. And again, it applied to both steam- and hot-water radiators.

Hydronics is definitely a green way of heating. Few people install steam these days unless it comes from a district heating system such as New York’s City’s ConEd. The steam business in buildings with boilers is about replacement and repair. It is a very profitable, non-growth business, and it can be very green if you take the time to learn about it.

Hot-water heat, the other side of hydronics, is a smaller portion of the business these days, going mainly into higher-end buildings. This is a very profitable growth business and also very green if you take the time to learn about it.

The rest is up to you.

Dan Holohan can be reached at Dan Holohan Associates Inc., 63 North Oakdale Ave., Bethpage, NY 11714. Dan operates the HeatingHelp.com website. Post technical challenges on The Wall and get input from the best in the business.