This website requires certain cookies to work and uses other cookies to help you have the best experience. By visiting this website, certain cookies have already been set, which you may delete and block. By closing this message or continuing to use our site, you agree to the use of cookies. Visit our updated privacy and cookie policy to learn more.
Home » Geothermal offers win-win solution for the environment and commercial building owners
Green PlumbingGreen Mechanical SystemsSolar Thermal/Geothermal

There is an increasing awareness — among consumers and governments alike — that climate change and greenhouse gas emissions have a severely harmful impact on the environment. Therefore, the demand for renewable energy sources and energy saving products, such as geothermal heat pumps, is also rising. In fact, the global geothermal heat pump market, valued at $9.4 billion in 2019, is expected to grow at a CAGR of 7.2% from 2020 to 2027, according to a report by Grand View Research. The commercial application segment is anticipated to witness the fastest CAGR of 7.4% over the forecast period.

“The awareness regarding climate change and the need to improve the energy efficiency of HVAC systems is definitely driving the geothermal market,” notes David Lopes, commercial sales director — North America, Bosch Thermotechnology. “I’d say the market has been relatively flat over the past three years. Currently, we see New York state has the most attractive incentives to specifically drive commercial geothermal applications. However, Texas has also been a strong market taking advantage of the geothermal component. Over the past few years, incentives have historically been a large driver for geothermal, but that is mostly on the residential side. On the commercial side, it has to do with the question of feasibility. You need a significant amount of land available for the ground loop. We’ve seen a lot of success in the education market with schools and universities because there is usually a significant amount of space to use to drill wells.” 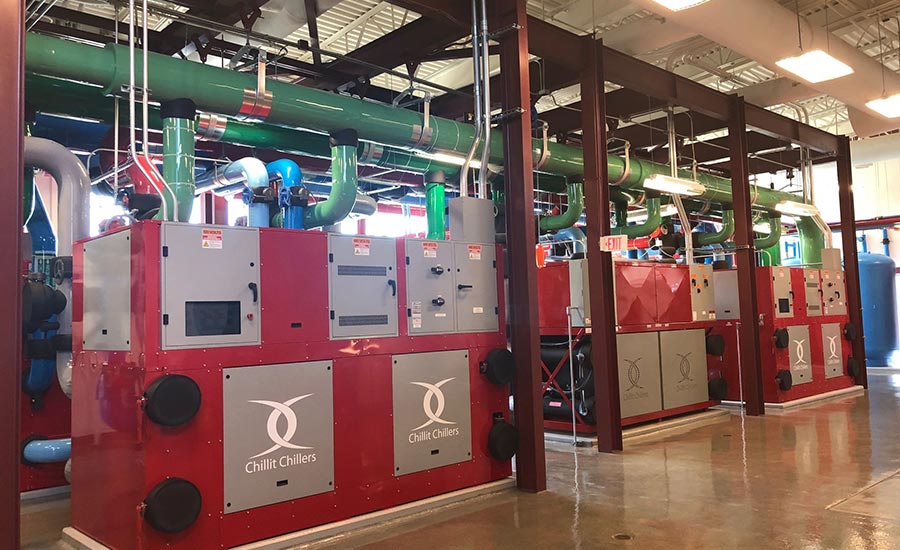 According to Brian Urlaub, director of geothermal operations at MEP Associates, a Salas O’Brien Co., the commercial geothermal market was growing before the COVID-19 pandemic, especially in the government and institutional market sectors.

“Universities around the country are moving away from central steam or gas fired plants and going to low temperature renewable solutions like geothermal,” he says. “The private sector is still struggling to move the needle, but large residential communities are now being implemented and financed through third party ESCO companies, which has improved the financials for developers. The single family, one-off residential geothermal market is also growing, but has slowed some since COVID-19, and also due to the sunset on the Federal tax credits. The once 30% tax credit is now 22%, and with costs going up and the cost of natural gas still very low, the market hasn’t taken off like the industry expected it to, or like it did back when the tax credits were first introduced. Unfortunately, tax credits and ROI are still the driving force behind most residential consumers. The federal tax credit of 10% doesn’t seem to have much effect on commercial decision makers, and the EPACT accelerated depreciation is also good for conventional equipment, so the federal incentives aren’t enough to move the needle for commercial geothermal projects.”

“Typically, when we think of the commercial industry, we envision large office buildings, manufacturing facilities and so on. But, geothermal is growing in other commercial sectors too, such as military bases and large residential developments. Communities like Whisper Valley in Austin, Texas and Serenbe, outside of Atlanta, are an amazing new trend that’s sure to last.”

Smith points to a few factors contributing to the growth of the commercial geothermal market, including the increase of all-geothermal residential developments, such as those he mentions above, as well as the federal tax credit and the goals set by states, cities and local municipalities for renewable, energy-efficient structures.

“People understand that we have to be better stewards of the Earth,” he says. “Geothermal accomplishes that and saves money in the process; it’s a win-win.” 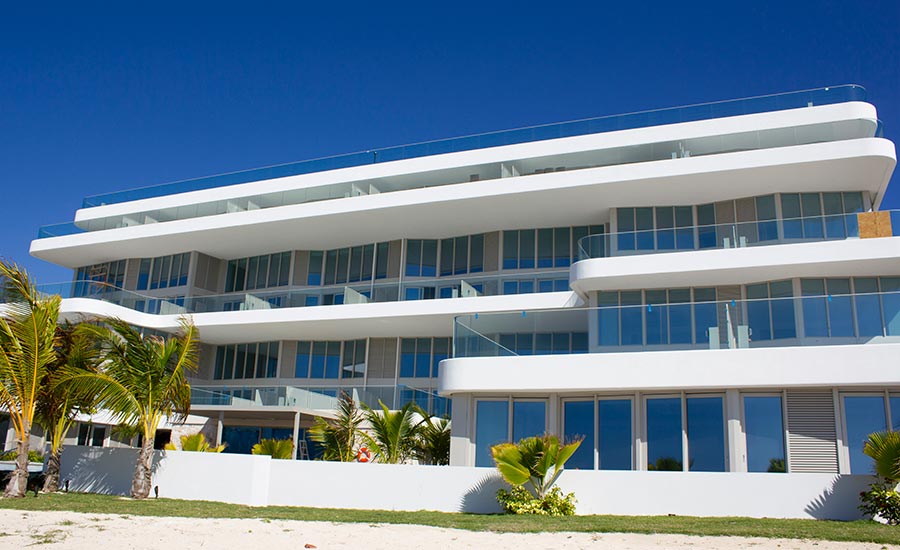 TIDES, located on Grand Cayman Island, is a residential property featuring 24 condominiums. Due to space constraints, an open loop reinjection system was utilized. Water is pulled from one well on-site, passed through a heat exchanger, then dumped into another well on-site. There are capabilities to use waste heat from cooling to heat the domestic hot water, eliminating the need for boilers. A UNICO high-velocity, small duct system was used to distribute cooling evenly and in an aesthetically-pleasing way.

Cost as a barrier

According to Urlaub, first cost is always the biggest hurdle to geothermal, and continues to be in both the residential and commercial markets.

“Carbon reduction mandates and some incentives have helped, but the overall biggest issue is still first cost,” he says. “Third party finance ESCO companies have helped this some, but as most owners understand, there is no free lunch, so paying interest or fees for that service is still an issue for some developers.”

The other barrier, Urlaub notes, is finding qualified contractors and the necessary infrastructure to mass adopt the technology.

“The limited amount of drillers that understand the technology and how to install systems efficiently and effectively is a barrier as well,” he explains. “The industry needs more training and industry support to help businesses and contractors understand the technology, understand why it is good to be involved and how it can help their business in the long run. Too many times they revert back to what they know — conventional systems — and the ‘optional’ costs for geothermal are priced so high, they either don’t want to bother with it, or just don’t understand it. 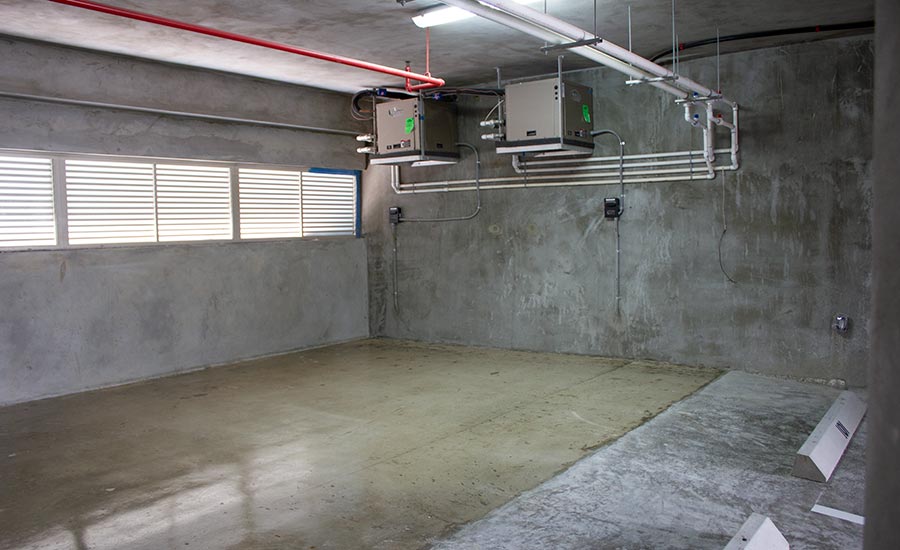 Enertech Global’s brand GeoComfort BT indoor split units were installed on the TIDES project. There are 49 units and 49 air handlers used to provide forced air to common areas and each condo/apartment. 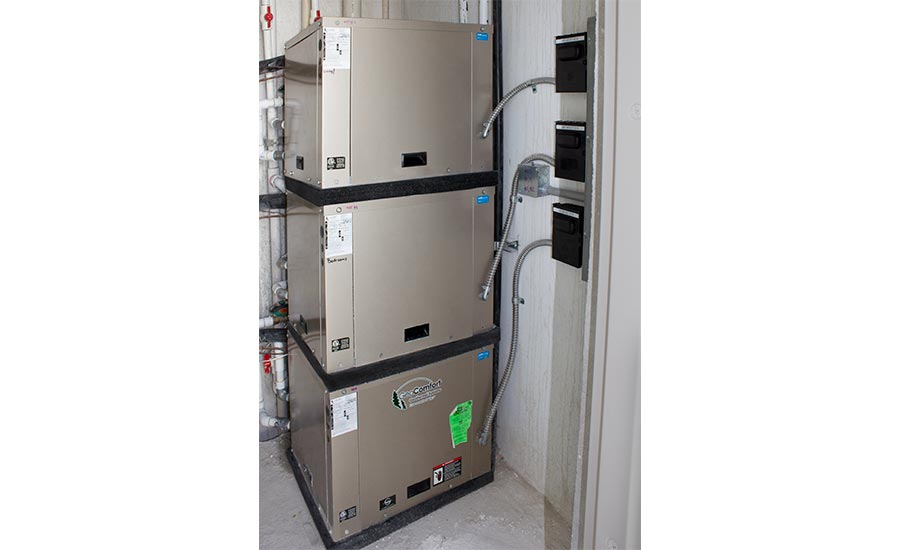 GeoComfort Commercial Series BT heat pumps are split models that provide ducted heating and cooling and domestic hot water. These systems can be paired with a conventional furnace to create a dual-fuel system. The BT heat pumps can be used for heating and cooling in residential developments, schools, public institutions, office buildings and more.

“There are numerous benefits for commercial building owners to choose geothermal, including lowest operating costs, lower maintenance costs, no outdoor equipment, longer life expectancy, better ROI, better LCC, quieter systems, less mechanical space and no need for roof or outdoor space, lower amounts of refrigerants, an energy source that will outlast the building and they can also meet any carbon goals set by a company,” he adds.

Smith agrees the initial higher cost of installation, when compared to traditional HVAC, tends to be the biggest hesitation to adoption.

“However, when building owners and developers sit down and look through the numbers, it’s quickly apparent installing geothermal will pay off, literally and figuratively, in the long run,” Smith says. “It’s an investment into the future of commercial buildings, and many see it as a worthwhile one if they take the time to learn more. Additionally, it’s very important to have partners that make the design, installation and ongoing service process seamless. Quality manufacturers, installers and engineers are needed throughout the project.”

While upfront cost is definitely a factor, so is feasibility in commercial projects, Lopes notes.

“Naturally, it’s a large upfront investment with a long-term ROI,” Lopes says. “It depends on the type of ownership. The initial cost of the ground loop is offset partly by incentives. For example, upstate New York has boutique hotels, and the green component of having energy efficient systems matched their value proposition on the market.

“A true geothermal application needs that ground loop, so you need lots of space and the ground needs to have certain characteristics,” he continues.

“For example, one component to look at is the type of soil. If it’s rocky, such as the soil in New England, the installation becomes either very costly, or it’s simply not the most appropriate medium to exchange heat transfer. Some soils are more prone to better installations.” 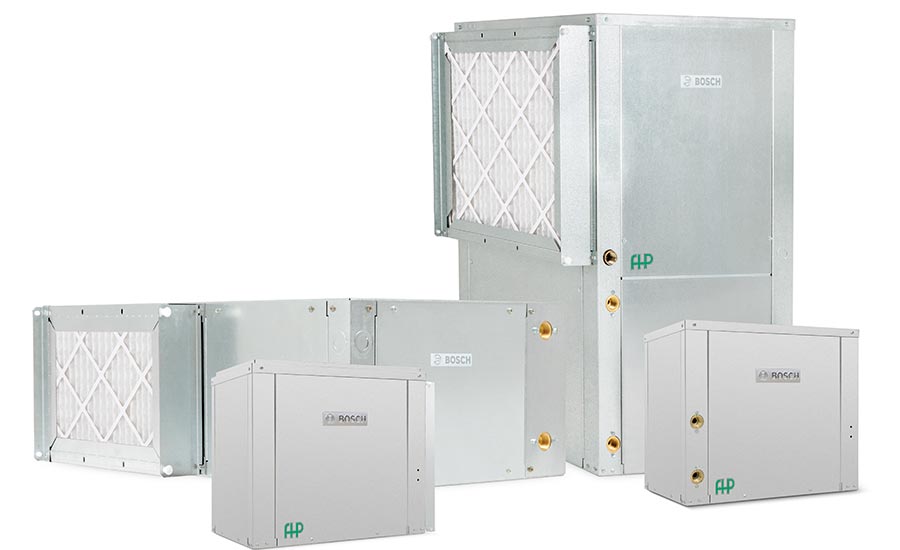 Better for the environment

Lopes notes the largest trend in the industry is the focus on energy efficiency and the concerns over climate change. Both of these trends are pushing the market toward electrification.

“There’s a huge movement toward electrification,” he says. “A heat pump system allows you to electrify your HVAC system. A well designed geothermal system, depending on your region, can avoid the need for using any type of fossil fuels.”

Urlaub says energy, maintenance and carbon reduction is driving the idea of district energy systems that can share energy between buildings and users.

“This has been done in metropolitan areas with conventional steam/chilled water systems, but now, it’s moving to low temperature hot water and geothermal district systems. The foundation of all systems, but especially critical with geothermal, is the thermal profile of the project, whether it’s one building, or multiple buildings on a district system, getting the thermal profile/energy model done correctly is the most important step.”

Lopes adds there is a huge potential for growth — in the right verticals.

“Geothermal is a solid, mature technology readily available today to drive the energy transition toward the electrification of HVAC and more sustainable environment with less energy consumption,” he says. “The increased awareness and focus on climate change will drive additional opportunities, as well as the proven results of systems installed over the past 20 years that have yielded outstanding results in terms of total cost of ownership over the lifecycle of the system.”

Nicole Krawcke: Out with the old, in with the new

Nicole Krawcke is Chief Editor of Plumbing & Mechanical and PM Engineer magazines. She joined BNP Media in 2014 and served as Web Editor and Business Management Editor of The ACHR NEWS. Prior to joining BNP, she worked at Patch.com, a hyper-local news platform focused on community journalism. She has 10 plus years of writing and editing experience and holds a bachelor’s degree in Journalism from Michigan State University.

Engineers must do their part to protect the environment