From rural eastern Canada to Ireland to placing roots in San Diego, Calina Ferraro, P.E., is right where she wants to be, but she continues to try to work her way out of a job.

“I used to say my goal was to engineer myself out of a job,” she says. “Which is to say if we can design buildings to work for themselves, then you don’t need to throw a gigantic mechanical system at it.”

Sustainability is a passion to Ferraro, a principal at La Mesa, California-based Randall Lamb Associates. It’s what she drives for with any project she comes in front of, and she excels in that arena.

She’s also an active voice in the engineering community, taking time to try and lead sustainable goals and help foster the next generation of thoughtful design engineers. These traits, among many others, have earned her pme’s 2018 Mechanical Engineer of the Year honor.

Gigi Bainbridge, AIA, and the managing director of San Diego architecture firm LPA, has worked on a half-dozen projects with Ferraro in the healthcare field. Bainbridge marvels at Ferraro’s intellect and how proactive she is with every project they tackle.

“She always has really good ideas of how to think about a project in a different way,” Bainbridge states. “She’ll look at it in a more unconventional way that will generate good ideas. She will come up with a better, healthier, crisper and clearer solution. 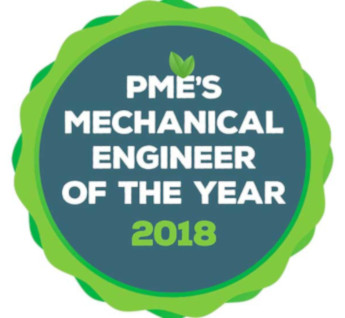 “I can’t begin to tell you how much an architect appreciates an engineer who is absolutely proactive about results. It’s why Calina is so valuable to me; her proactivity. Besides the fact, she’s smart as heck.”

Bainbridge and Ferraro recently partnered on feasibility studies for some pharmacy projects. Bainbridge notes everyone thought these facilities would be “pieces of cake” because the rooms were small and the project scope was limited.

“They turned out to be regulator nightmares,” she says. “They’re expensive little jewel boxes with extremely complex mechanical systems and phasing.”

Thankfully for Bainbridge, Ferraro came up with a winning scenario that hit all the important benchmarks for these pharmacies.

“Just sitting down with Calina and working through all the mechanical and plumbing issues that had to be resolved, it was clear on how to make it happen in a way that would be cost-effective for the owner,” Bainbridge says. “It was a solution that no one had ever thought of before. All those things put together helped the project enormously.”

She continues: “Calina’s sharp. Of all the people I work with as engineers, I have a great deal of respect for her. She is capable of looking at the whole picture and how the mechanical piece works within the whole system.”

One of Ferraro’s recent standout projects is the suburban-San Diego Del Mar Civic Center. Ferraro credits the architecture firm The Miller Hull Partnership out of San Diego, the lead architect Caroline Kreisler and city leaders for being responsible with Del Mar residents’ tax dollars, while still desiring for an environmentally-sustainable showcase building.

“The architect, kudos to Caroline and her team. It is a beautiful project,” Ferraro states. “The client, the City of Del Mar, felt they wanted to be responsible with the money they had and weren’t looking to gold-plate anything. They didn’t want to be flashy, they didn’t feel like they needed to spend the extra money on certifications or plaques or things such as that, but still wanted to be a showcase project for sustainability.”

Ferraro provided the Del Mar Civic Center with a bevy of natural ventilation along with some displacement ventilation systems. “It’s an efficient mechanical system,” she says.

Kreisler touts Ferraro’s drive and willingness to discuss the project from the beginning that makes her stand out from the rest.

“She’s an engineer who is willing to come to the table in the design phase, roll up her sleeves and work with us to figure out the design,” Kreisler states. “It’s not the traditional way of us designing the building first and a mechanical engineer puts some ducts in. That’s not Calina and that’s not how she wants to work.”

“Sometimes engineers are so deep into the subject, you do not know what they are saying,” she says. “Calina has this great ability to illustrate to clients who may not know the subject at all and can relate and understand what is going on (with their projects).

Despite living and working in arguably the world’s greatest climate, Ferraro always wants to discuss what the expectations are for a building’s thermal comfort. She wants clients to understand comfort is not just the number on a thermostat.

She and her Randall Lamb team completed the design on a coastal office building where Ferraro says the clients were torn between wanting to aggressively push for sustainable design with natural ventilation and a minimal mechanical system vs. going too far and having an uncomfortable building for its occupants.

“We had meetings to look at actual weather profiles in the area and have honest conversations about when and how often temperatures may get into higher ranges,” Ferraro recalls. “We also talked a lot about perceptions of thermal comfort. People are so used to thinking of a building as being sealed up and maintained at 72-74° F that we think that’s the only thing that’s comfortable. But we live in San Diego. I rarely hear people complain about the temperature when they are sitting on the beach with an ocean breeze, or sitting under a shady tree in the park, even if it’s high 70s or low 80s out.”

“We designed and laid out a mechanical system for the whole building — but designated about 75% of it as ‘future’ installation,” she says. “This way they can have the passive systems they want to achieve their sustainability goals and avoid mechanical first cost, but the infrastructure and space is coordinated if they want to add mechanical cooling in the future. This gives them flexibility if the use or occupants change, and also builds in resiliency toward climate change in the future if summers start getting much hotter and humid, making natural ventilation less effective.”

With healthcare being Bainbridge’s field of expertise, she doesn’t get to work with Ferraro on a true sustainable project. But, she says Ferraro always is pushing for any sustainable technology or design that can be incorporated for the healthcare facility.

“When she is on a project she finds ways to make things happen to incorporate sustainability into projects,” Bainbridge says, “even though the general direction of the project may not be in that vein. She enables those things to happen and makes us architects think outside the box as well. It’s all because of her thoughtfulness in that direction.”

Ferraro says there’s a false delineation between projects that get put into a “normal” or “sustainable” category.

“I’ve always been focused on trying to incorporate sustainable design options where they make sense,” she says. “There are a lot of technologies that are just well-suited for everyday projects. So if it’s a good fit, I think being able to bring a new design approach or a new technology in, (I’ll try to use it).”

Ferraro continues to try and show clients that the word sustainable does not necessarily mean extra expense.

“There’s a perception that it’s always going to add cost,” she states. “That’s not necessarily the case, and being able to present something new and demonstrate the value of that on a project where somebody’s not specifically asking for it is important. We shouldn’t show up and have to ask permission to do a good job. If we know a better answer, bring that to the table. That’s what they’re hiring us for.”

Ferraro is a member of ASPE, attends as many of the Society’s events as she can and will lead technical sessions on occasion. Ferraro has presented on ethics in engineering at the ASPE Technical Symposium events, but mostly focuses on sustainable design. She believes this is a way to “give back and do my small piece to help improve the industry.”

“We’re all working to be better engineers and designers and to improve the way we do things,” she states. “The more we can pool and share knowledge, the better off we’ll be as an industry. By writing articles and doing speaking events, I feel it’s a way to make sure the time and energy I’ve invested in learning something doesn’t stop with me.

“If I can get information out there to pique someone else’s interest or consolidate something I’ve learned to save someone else from starting from scratch, bit by bit that’s how we move the industry forward.”

Ferraro is as active as possible with the local Green Building Council, ASHARE and other industry groups such as a subcommittee focusing on the water-energy nexus.

“I’m already passionate about those types of things,” she says. “Putting together presentations and doing all that, it takes a lot of extra time and work, so it has to be something that I’m already interested in.”

Ferraro has been a principal at Randall Lamb for the past two of her seven years with the firm. She’s continuing to learn how to balance the future business planning of the company with the day-to-day design demands.

She believes she’s lucky to work with “her best friends” that she will go camping with, take hikes with and partake in other social functions. “We have a real good team here,” she says.

Randall Lamb has about 35 employees in its San Diego office and features an open-air office with cubicles in a renovated historic bank — complete with an old, huge and heavy safe. Ferraro thinks she leads by example and wants her team to “come onboard” with whatever she’s designing. She does not want to dictate how to complete a project to any of her colleagues.

“It’s important to create a space and environment for people to succeed and thrive — and understand that means different things for different people,” she says. “Once that space is created, it’s on the person to grow into it and demonstrate their own success.”

She adds: “I try to make sure to always ask ‘why’ they’re doing things. This not only lets me continue learning, but also makes sure we’re not just replicating cookie-cutter designs. Especially with young designers, it’s really important that there be a thought process and reason for all their design decisions and not be acting on auto-pilot.”

Obviously, you won’t find Ferraro sitting in the back punching numbers and doing calculations during a group meeting on a project. She’s in the mix discussing the details, learning about who will occupy the building, what is the standard dress code, how the windows will be laid out and anything else you could think about for the facility.

“Let’s talk about how you actually use the building,” she says. “There are lots of rules of thumb, the formulaic ways you can design buildings, and that’s not what I got into the industry for. I want to push the envelope.

“That’s what gets me excited about design — what we’re actually doing. We’re trying to design the right system for the right application, not just throw the same design on that’s been on every other job.”