The commercial pump market could see some major shakeups in the near future.

“I think the industry is ripe for some major disruptions,” says Greg Bretz, vice president of sales, commercial building services with Grundfos. “As you look at the first pump back in the 1800s and compare the amount of innovation that’s happened around end-suction pumps today with the innovation in airplane technology, the difference is striking. An end-suction pump today looks a lot like an end-suction pump did back then.

Chris Johnson, director of development and engineering at Xylem, says integration creates a demand for commercial pumps with embedded diagnostics and remote monitoring of systems.

“The desire for energy efficiency also is advancing sensorless control of pumps and drives,” he says. “With sensorless technology, the speed of the pump is adjusted based on system curves rather than standalone sensors monitoring pressure.”

Bretz says many discussions with engineers focus on the user experience of the products.

“(That covers) everything from our website to selection software to other digital ways they interact with our products,” he states. “That really is their first priority. To them, the ‘product’ is the process of selecting and designing the pump and the system.”

Smarter controls and packaged pump solutions have seen an increase in interest. “I think moving from field-built installations to a prepackaged system helps with the footprint discussion,” Bretz says.

Additionally, the new Department of Energy efficiency guidelines continue to be a point of emphasis of manufacturers and engineers. Bretz says engineers want to make sure products will be compliant. “We certainly will be,” he states. “We’re in the middle of the testing process and validating everything.”

Liberty Pumps and its engineers focus on the company’s grinder pumps that can provide a solution to aggressively shred the different kinds of solids such as baby wipes, rags or other products that are being disposed. 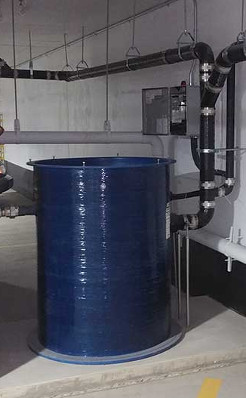 Liberty Pumps focuses its grinder technology to help combat pump jamming due to items being flushed down drains that shouldn’t. Photo courtesy of Liberty Pumps.

“With the increased use of disposable products finding their way into our sewage and waste systems, pump jamming has become a bigger issue with traditional pump designs,” Liberty Pumps Vice President of Sales & Marketing Randy Waldron says. “Our product-development engineers travel into the field to visit real-world installations. We also are entertaining visits from engineers, contractors and maintenance personnel at our facility to better understand the issues they face.”

Waldron adds: “Finding real-world field testing for evolving technologies can be difficult. Trying to replicate what may happen in the field with controlled lab testing doesn’t always give you the full picture, so it is important to find real-life applications for testing as you develop these new technologies.”

Armstrong Fluid Technology has conducted multiple interviews and surveys with engineers, designers and contractors to find ideas on how to better serve the industry. The top three responses to the survey are how to provide faster startup time, low-noise operation and improved efficiencies.

“There is a lot of pressure from the legislation, the U.S. Department of Energy, as well as from Europe and its Europump legislation around improved efficiencies,” Armstrong’s David Lee says. “There are pressures in the marketplace on improving the product efficiencies.”

Additionally, Armstrong’s Michael LiCastro says engineers are trying to get away from traditional set-point control designs.

“We figured out how to maximize the operation of our product within that product. With this equipment being able to optimize itself, we no longer need to have as many points built into the energy management system in order to do so.”

With chillers and pumps working at the same time on their own, LiCastro says engineers need to be assured they will work together and not on their own “individual islands.”

“It started in the industry years back with BACnet,” he says. “If you recall BACnet was the big thing, open protocol, everybody could talk to each other. It was no longer proprietary language. Well, we’ve moved beyond that now. Everybody’s certainly BACnet-capable, but now we’re looking at it. With all the development of these technologies, how can they work on their own, but yet work together and provide my client the best, efficient system? That’s where we’re at today. That’s our challenge.”

Pump manufacturers such as Grundfos and Armstrong Fluid Technology realize  that building owners are trying to squeeze as much money out of their buildings and mechanical rooms are seeing the brunt of that. Armstrong’s Tango pump line features two rotating assemblies in a common casing with one inlet and one outlet. It has minimized the size of the pump to make it as small as possible and still deliver maximum hydraulic efficiencies and capacities. 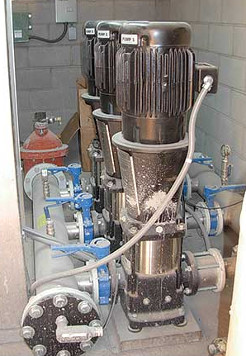 “Building owners are looking for square footage they can charge for. So your mechanical rooms are becoming smaller and smaller, but yet you’re still asking them to do the same amount of work,” LiCastro says. “Space saving is becoming more and more of an important factor when laying out and designing a mechanical room. So, when you take our Tango pump where you have two rotating assemblies in a common casting with one inlet and one outlet, what we’ve done is taken it and minimized the size of that pump to get it as small as possible, yet still deliver maximum hydraulic efficiencies and capacities.”

He adds: “What we’ve done now for the engineers is given them that ability to get done what’s being asked of them and not give up or jeopardize the ability to access this equipment once it’s installed. That’s another issue we see a lot. A lot of that thought was put into the design of this product from that standpoint — from the installation standpoint.”

Grundfos already is in the development phase of new products that can operate well in these tight mechanical rooms.

“The physical footprint of the product is a very important thing for them,” Bretz says. “They’re dealing with smaller and smaller mechanical rooms, so we’re trying to find ways to innovate on a smaller footprint.

“In October we’re launching a new booster system with ECM motors up to 15 hp that does not require a control panel, thus simultaneously increasing efficiency and reducing footprint. We’re also looking at some differentiated prepacked HVAC systems that drastically reduce footprint and noise, while also being the most efficient. There are some innovative things going on there.”

Grundfos sees a big shift in the commercial pump market coming from a focus on life-cycle costs because building owners will start to think about the overall costs of the building over the upfront costs of construction.

“We don’t build products that are designed to fail after a certain period so that we can make profit in the aftermarket. We’re looking for the lowest lifecycle costs,” Bretz states. “I think you’ll see a shift to more building owners that really pay attention to lifecycle costs and try to influence the products that are going into their building. I also think you’ll see contractors that differentiate themselves by optimizing lifecycle costs. Our hope is this drives more engineers to hold their specifications for lifecycle-optimized solutions.

“I think we’ll see a trend in the decision-making process of being more focused on lifecycle costs and not being necessarily optimized to get past that first sale and the contractor’s warranty period. I also think we’re going to see a move toward systems with smart controls tightly integrated into building-management systems. The ease of integration into a building-management system is important. Connectivity and preventative maintenance is going to be big.”

Rainwater harvesting and water-reuse systems also have seen some increases, according to Bretz, but the major market growth has been in data centers.

“There’s huge expansions going on with new data centers being built and the cooling requirements are extremely important,” he says.

Xylem’s Johnson highlights the graywater reuse market as one that is developing for the company.

“Graywater reuse is one example in which water from sinks or showers is filtered and recirculated for nonpotable use, such as flushing toilets, giving it one more pass before leaving the building,” he says. “Similarly, water runoff from roofs and parking lots can be used for processes such as irrigation after it undergoes an extensive filtration process. Different HVAC technologies such as free cooling waterside economization and geothermal heating and cooling systems are other areas where Bell & Gossett products are contributing to energy efficiency and sustainability.”

“With more complex building systems and more performance data available to building owners, engineers, contractors and facility managers, we are seeing a more collaborative approach to HVAC and plumbing system design and a need and interest for more technical knowledge,” Johnson says. 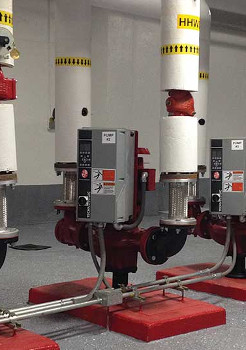 Bell & Gossett has developed ESP-Systemwize, an online selection product selection tool for engineers, building owners and others to find, which pump would work best for a specific application. Photo courtesy of Bell & Gossett.

Armstrong’s Mark Gallagher sees connectivity and the Internet of Things becoming more integral to product and system design. The company started collecting information and utilizing it for two important aspects.

“One, (we) open the information we collect inside our product, for other applications, in a secure fashion,” he says. “Secondly, we take that data, extract it, and provide the services directly to end-users and owners in a very concise fashion. They then can make informed decisions in a real-time or near real-time basis. So, there’s two broad purposes — information that will support related decision-making.”

But, connectivity is just one part of the equation, according to Gallagher. Pumps are going to have more embedded technology and be able to use advanced analytics to optimize themselves for the systems.

“Increasingly, other equipment, including pumps, is embedding more analytical capability as the cost of computing becomes much less expensive and dramatically smaller,” he says. “The amount of data that can be processed on a device dwarfs what was available 10 years ago. The connective part is outstanding, but it’s only part of what could be a major trend, which is more intelligence built into devices, whether it be valves, pumps or chillers.”

Lee adds: “It is a bit of a game-changer. Building owners have said they’ve done retrofit projects where they upgraded their HVAC equipment, pumps, chillers and boilers. Then once the project’s done, their operating costs are higher than before the upgrades. So having this connectivity and performance management allows them to pinpoint where things are not set up as they were supposed to be. Even over the life of the building, we know things change — strainers get plugged, sensors fail and performance drifts over time.”

This article was originally titled “On the rise” in the October 2017 print edition of PM Engineer.