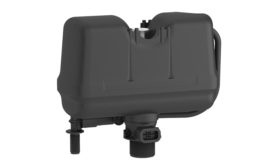 Flushmate introduces the new Flushmate 503 series 1.6-gpf and 503H series 1.28-gpf pressure-assisted systems for pressure-assisted toilets. The new Flushmate system features an enhanced vessel design with improved flushing performance to offer years of hassle-free service and water savings, the company states. The new Flushmate 503 and 503H systems for 1.6 and 1.28 gpf, offer the existing benefits of a dependable single-flush performance and up to a 50% larger water surface area compared to traditional gravity toilets to reduce odors and keep the bowl cleaner by reducing the dry surface area, plus the new models offer improved drainline carry, Flushmate explains.