Ethan Grossman: Get your motor running’

A deep dive into understanding how motors work.

Motors are found everywhere in buildings, and engineers are responsible for making sure they are sized correctly and have adequate source energy to make them work. The heart of almost every HVAC, plumbing and fire protection system is the source equipment. The majority of the rotating equipment — the fans and pumps that keep our building systems safe and comfortable — are operated by electrical machines called motors. They are the soul that takes the spark and keeps the lights on. How well we understand the relationships between sizing our equipment and coordinating with electrical engineers will help determine how well our complete engineered systems function.

Rotating equipment is typically run with an induction-type motor that uses stationary (stator) and rotating (rotor) magnets that repel each other and spin a shaft. Remember that experiment you did as a kid where two magnets repel or attract each other? The concept is similar to that. Add some high-powered electricity and see what happens. If you have ever wondered what makes a motor spin at 1,800 versus 3,600 revolutions per minute, it is actually a function of how many magnets are used in the construction of the motor, related to a factor of 60 for the 60 cycles of sinusoidal waveforms that find their way through the electrical conductors every second.

Most of us have an idea that it takes a bigger wire (conductor) to convey more electricity to turn a bigger motor. This is a very important life safety concept to understand because unlike water when you try to push too much electricity through a wire, it can actually heat up and cause a fire. Or worse, in the case of stored energy, an explosion. While the amount of flow through a pipe is commonly calculated as gpm (gallons per minute), the amount of electrical flow through a copper wire is commonly calculated as Amperes.

An Ampere is defined as “the current, when a number of electrons, having one coulomb of charge, move past a given point in one second.” We can see how amperes, or amps, are related to the more familiar concept of flow in gallons per minute. One term in the definition that may not be intuitive is “coulomb.” While a “gallon” is a volume of something that we can visualize and touch, a “coulomb” is also a volume of stuff — except it is not easy to visualize since it is practically invisible and it is not something we want to touch, since it is composed of electricity! The amount of electricity that is contained in a single coulomb is defined by an elementary charge, which is the electric charge carried by a single atomic electron. As it turns out, there are about 6.2 quintillion elementary charges in a single coulomb. That is a 6.2 followed by 18 zeros, or in numerical form:

What is so fascinating about electricity is that it becomes visible through the effects of magnetism and that is how Mr. Coulomb performed his experiments. He charged two metal-coated balls with static electricity and measured the distance that they repelled each other. That is the effect that we referred to earlier. When we send current, in amperes, through an electric motor, an electromagnetic field is created that repels rotor magnets from stator magnets and makes the motor spin.

The amount of current that is required to spin a motor is predictable and follows a rule of thumb of 1.25 amps per horsepower for 460V power up to 14 amps per horsepower for single phase 115V power. The reason that amperage requirements drop at higher voltage is like why a fire protection sprinkler requires less flow at higher pressure. Reference NFPA 13, 2019 § 27.2.2.5: 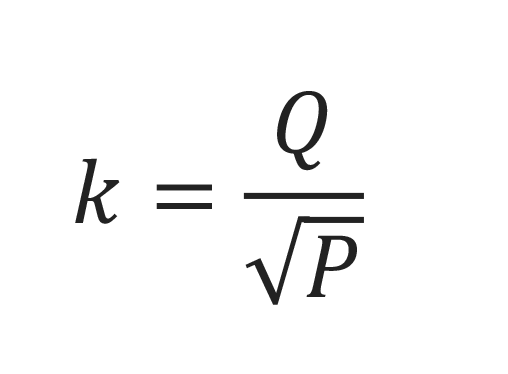 Where k is related to the orifice size of a sprinkler, Q is the flow rate at the head and P is the pressure. As pressure increases, the flow rate required decreases. If you want to try and visualize this formula in your head pick numbers for pressure that are easy to take the square root of, like 100 psi or 25 psi.

Plumbing systems themselves are not as directly analogous since fixtures will usually control the pressure at the point of use. This would be like having an electrical transformer or voltage regulator at every device. Once water “leaves the pipe” in a plumbing or fire protection system, it experiences atmospheric pressure. This is the equilibrium pressure we experience when we swim in a pool or the ocean. When electricity travels through a wire and spins a motor, it continues its path in a controlled manner to complete the circuit. One could say that electricity going to ground is like water going down the drain, it returns to its source to complete the circuit.

Another important concept about electricity is the idea of “inrush current,” sometimes also referred to as “locked rotor amps.” Any of us who have had a vehicle breakdown and had to push it to the nearest service station understand how difficult it can be to get the vehicle rolling in the first place. The laws of physics, natural forces like friction and gravity, act against us until we get enough momentum to do the work we need to do.


That initial effort is also what is required to start a motor that operates a pump or fan. The “inrush current” is typically on the order of 5 or 6 times the operating current of a rotating piece of equipment. Electrical engineers use the National Electrical Code (NEC) to design circuits that protect the circuits, devices and the public from any issues. These levels of protection include specially designed devices like circuit breakers and fuses for short circuit and ground fault protection. The electrical engineer's role is to ensure that the protective device will allow for the high current/inrush electrical energy to be applied to the motor when it’s necessary for start-up, but not when it could damage the motor after it is running.

Engineers who design hydronic and air-side equipment should strive to understand the motors that keep our equipment rotating and systems working. It is important to communicate as early as possible with the electrical engineers you work with so they can, in turn, size their systems as safely and efficiently as possible. When you’re well designed construction documents are sent over to the contractor you can be sure that everything will be in place to, “Get your motor runnin’”

Authors’ note: This article is dedicated to our dear friend and colleague, Terri Stull, who passed away in a car tragic car accident along with her husband on March 28, 2022. Terri was notorious for loving a good “geek out” session of the most technical of electrical engineering topics, but probably even more famous for seamlessly transitioning a conversation from short circuit fault currents into a story about her own sons and welcoming any conversation about her colleague’s family which she essentially considered her own. The inspiration for this article came from a weekly session our Boston electrical engineering department holds in her honor. It’s a half-hour session dedicated to really geeky electrical engineering topics and named affectionately as a “4T,” or “Terri’s Tuesday Tech Talk.”