The real value of snow-melt systems

Why you should add snow- and ice-melt systems to your projects.

There’s a saying in the environmental health and safety (EHS) industry: “There are no accidents.”

Basically, the idea is that all accidents can be avoided. All we need to do is take a few extra moments to think about what could happen. If the wet mop is left unattended — what could happen? Someone could slip on the water. Or, if a hard hat isn’t worn when something is dropped from higher up, it could lead to a heck of a headache, or worse.

In commercial or industrial settings, this way of thinking has become the norm — employees are empowered to take control of their environment. The result is a safer place to work. There’s no doubt it’s easier to identify things when they happen consistently, each day. Like having lights in the parking lot.

Safety isn’t the only factor involved. Cost bears a level of importance, too. Injuries cost companies millions a year in lost revenue and production. Companies are learning it’s more effective to invest in safety systems early rather than to wait for something to happen.

And what about those things that don’t happen on a daily basis, but carry just as much risk? Take, for instance, the risks that come with winter weather.

Snow-melt systems certainly cost more than turning on the parking lot lights, though they help to protect employees and customers on a much different level. Sure, there’s the convenience of trouble-free snow and ice removal, though the greatest contributions of these systems are safety and cost reduction.

There are several factors to consider when evaluating any major project. Project costs can generally be broken down into three main categories: Initial, operational and ROI (or return on investment), and finally — the safety element. How much does an injured worker cost a company?

The first factor, initial cost, is an easy calculation. How much does it cost to buy something? Almost every project has a budget. The bigger the project, the bigger the budget — but bigger doesn’t always mean “you get what you want.” The more complicated a project, the more difficult it becomes to figure out how best to allocate the funds. 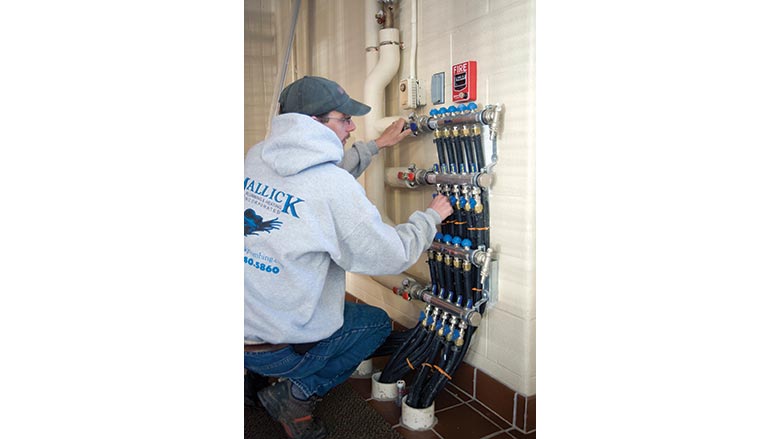 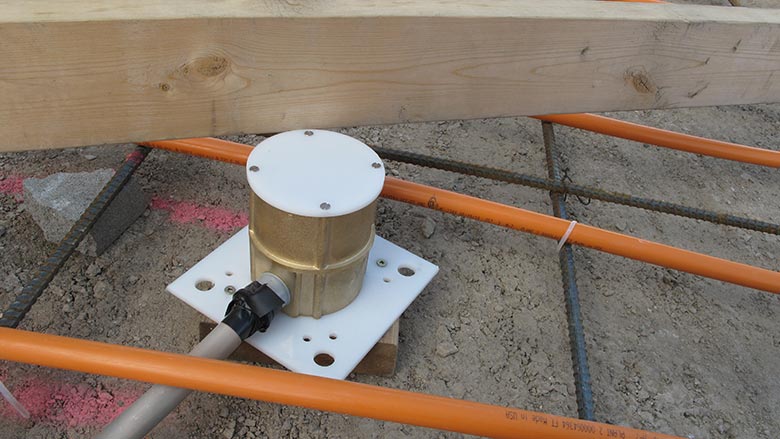 A clean and simple sensor rough-in assures trouble-free operation for many years. 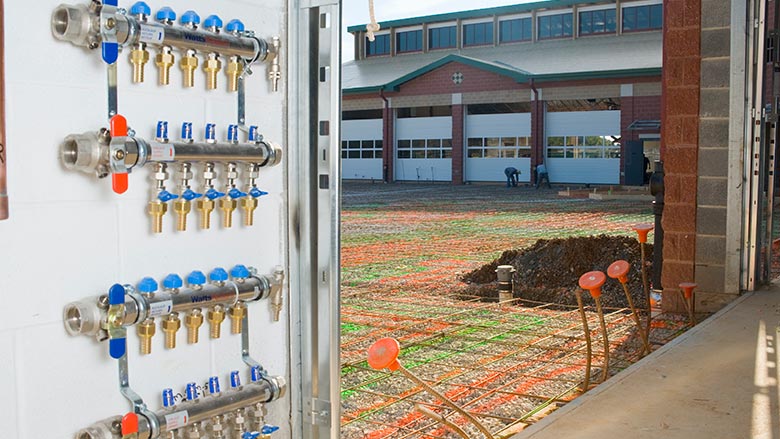 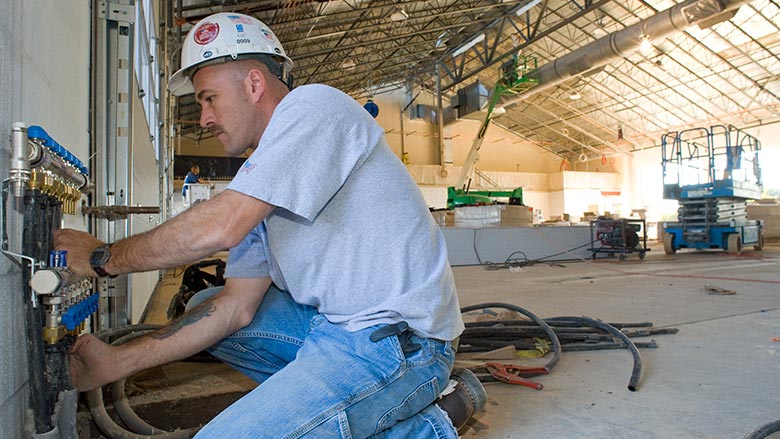 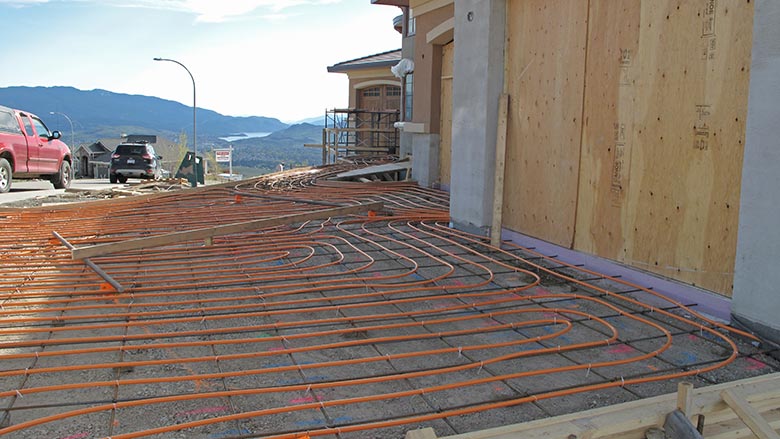 A driveway in rural Canada, just prior to the concrete pour.
❮ ❯


Part of a project designer’s job is to weigh the purpose of a project with the budget and do the best they can to deliver the most cost-effective solution possible. It’s generally during this phase where snow-melt systems should be considered — and, sadly, this is where they often meet their demise. No one is going to deny the simple fact snow-melt systems can impact project cost. Any “add” will have to be vetted by the designer, then the owner, or board. The thing never to lose sight of is what does a snow-melt system off-set? How does it save the company in the long run?

Initial cost has to be balanced by the return. So, how do they do that? How does one justify a substantial added cost like, say, a snow-melt system? To do this requires looking at the next cost factor:  Operation and ROI.

With operation and ROI, there are a few hard cost factors associated with snow removal. There’s the material to remove snow. This can include simple items such as ice melt chemicals and shovels to more complicated items such as snow blowers, tractors with blades and salt-spreaders to dump trucks that haul snow away. Anything mechanical adds not only initial dollars, but also monthly maintenance costs. Of course, anything mechanical can fail, so there’s the added cost of maintenance or replacement.

Helipads: Hospital helipads are excellent examples of what snow-melt can do. With space becoming more precious, many hospitals are forced to install helipads on building roofs. These rooftop helipads can become extremely dangerous when coated with ice and snow. Snow-melt systems keep them effortlessly free of snow and ice, enhancing trauma care, not causing it.

Sidewalks: Convenient and more inviting to passerby, sidewalk snow-melts can increase business and decrease liability. Customers are more likely to shop stores with clear sidewalks, free from ice and snow and chemicals.

Stairs: Of course, stairs can be dangerous. With snow-melt systems in place, pedestrians can use steps safely. The spacing of tubes for stairs varies according to application, but they’re usually installed with two lengths of tubing in the tread and one in the riser.

Hospital entrances: Because they are usually considered Class III systems, tube spacing for hospital entrance ramps are usually set closely at 6 inches OC. Further, these systems are idled, or operated at a reduced output, to decrease system lag time. When sensors detect precipitation, the system is then operated at full output.

Parking garage ramps: Snowmelting systems ensure cars driving in off the street can safely negotiate parking garage ramps. One note of caution: be sure to place sensors for these controls where they can detect snowfall, or precipitation and temperature.

Large area “hot pads:” Instead of melting an entire area, sometimes too large and cost prohibitive, smaller areas are melted where snow can be deposited. This technique is often used for airport runways and large parking lots. Typically, tubing for hot pad slabs is spaced at 4 inches to 6 inches OC to accommodate a large amount of snow. Remember, 6 inches of snow from a runway or parking lot will be collected and deposited on the pad. It’s not uncommon to have a hot pad of perhaps 30 feet by 30 feet with snow piled 4 to 6 feet high.

Hot pads are usually operated manually, activated whenever the need arises. Twist timers can be used in place of on-off switches so the operator doesn’t have to remember to switch the system off.

So, whether you’re seeing an occasional need to eliminate snow in Newark, New Jersey, or warming an emergency room entrance in Nome, Alaska, a snow-melt system, properly installed, will readily answer the call.

Those “hard costs” are easily noted.  What about soft costs? These include things such as additional work hours, which generally means overtime, or time-off hours due to slips and falls. Injuries also have a direct impact on insurance costs.

Here’s one we rarely think of: The impact on employee morale. Most maintenance teams are small, usually consisting of only a few people to manage the repairs of a large facility. Any time away for someone means added work shifted to those remaining. If the time away is due to an injury and not a vacation, then the duration of that added work becomes an unknown, which can cause added stress.

People aren’t the only things being stressed. How often do we consider the impact to the building itself? Take a hotel entry for instance. Maintenance personnel blade the walk and then spread deicer. This helps melt the walk, but leaves behind a residue or undissolved pellets. When people walk along the sidewalk, their shoes pick up the pellets and transport them inside where they drop off and get ground into the carpet, or abrade and etch finely-polished stone or tile surfaces. That’s right; that stuff acts like a low-level acid. Over time, this solution causes the tile to etch and fade, and mortar gradually deteriorates. All of this causes damage to the interior which drives up operational costs and reduces customer satisfaction.

Another important “soft cost,” is impact to the environment. We rarely consider the final destination of those salts and deicing chemicals, tossed so casually on the sidewalk and entryway. Eventually these chemicals get washed into the sewer or into local creeks and lakes; some make it all the way to major estuaries and bays.

Yet, at the end of the day, things almost always come down to hard costs. Material costs are not only offset by the soft savings noted above, but also hard costs related to operation. Snow-melt systems provide a unique ability to use resources normally overlooked. 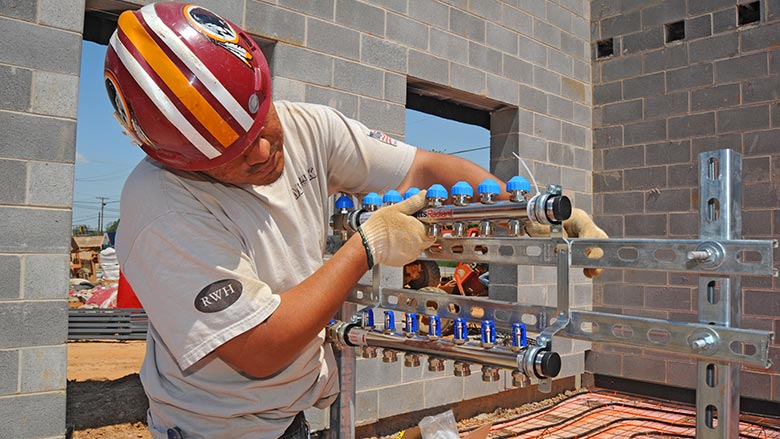 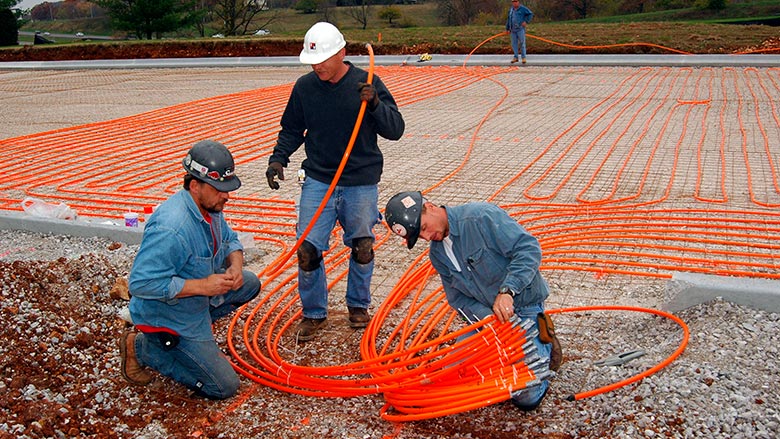 Oxygen-barrier PEX tubing, here in 3/4-inch size, was installed by the mile at J. B. Hunt’s headquarters facility in Lowell, Arkansas. 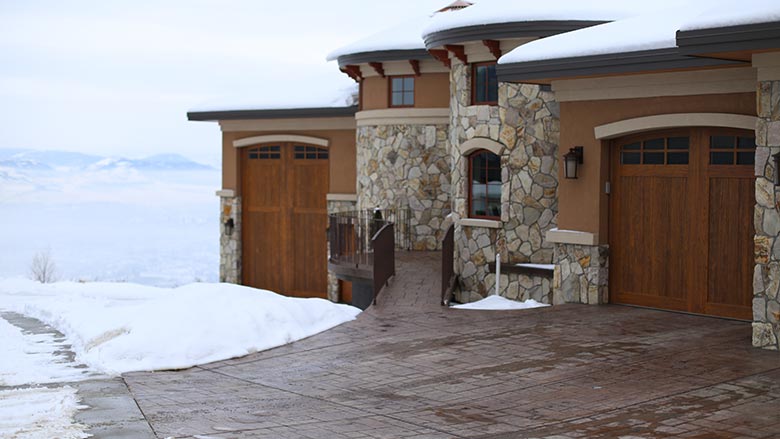 Commercial equipment generates heat as a by-product of operation. Cooling towers, by design, generate waste heat which is typically vented to the atmosphere. Large refrigeration or cold storage units usually vent heat extracted from the enclosure.

Instead of letting these Btu literally evaporate into thin air, why not put ‘em to use? After all, snow-melt systems can reclaim those rogue Btu, putting them to hard labor with no complaint from the “work crew!”

All of these help to offset project dollars, but the one factor rarely given the level of importance it should have is operational safety.

Consider the cost of a single — or worse — multiple slip-and-fall occurrences by customers.  What’s the potential cost of a bad accident to the company whose property this happens on? How much does lost man-hours impact future revenue?

In 2017, according to the Bureau of Labor and Statistics, there were 20,460 ice, sleet and snow related injuries — and about $17 million a week in lost productivity.

Add to that the average cost of injuries related to accidental falls due to ice can range from $20,000 to $50,000, though easily more when we consider the ease with which people move toward litigation. Conservatively, that’s an additional $357 million in insurance claims alone, assuming only half of those 20,460 incidents in 2017 resulted in a claim.

For a business owner, each incident not only means instant costs out of pocket, but also the potential for increased insurance fees over time.

Overall, snow-melt systems are one of the few project-adders that can quickly enhance project savings over the life of the project.

Kolyn Marshall is a systems design engineer for North Andover, Massachusetts-based Watts. He has been with the company for 25 years. His responsibilities include radiant heat and snow-melt, ACV, Powers and IntelliStation systems designs, customer service and the conducting of professional seminars regionally and nationally.