Leaking line sets cause problems despite being protected by insulation.

I first encountered formic acid erosion/corrosion when our installed air conditioning and heat pump evaporator (indoor) coils began suddenly leaking refrigerant in 2008. These were not old coils either, and some had only been installed for a year when the issues arose. Most, however, were one to three years old and, unfortunately, outside of any manufacturers labor reimbursement warranties. When I heard from several manufacturers that the issue was formicary corrosion/erosion, I took a peak and the degradation of the copper tubing looked, for all the world, like the old ant farm tunnels. Funny, because in researching formic acid, I discovered some ant species excrete formic acid as a defense mechanism. That brought back the following memory.

When I was a young lad, I looked forward to my copies of Boys Life magazine. While the articles and stories of heroic events young boys had performed were great, it was the ads in the back that really captured my attention. X-ray glasses with the implication you could see through walls and objects, hovercraft kits you could build and lots of other cooler-than-life items. The one thing I did purchase was an ant farm. Being too tight with my limited monetary resources due to my $1/week allowance, and living out in the country, I simply dug up an ants nest to populate my ant farm.

My curiosity piqued, I wondered how those ant farms of yesteryear fared and if they were still available. Milton Levine is the ant farm inventor and when he returned from WWII, he, like the other 15-million-plus GIs, found there just were not enough jobs to go around. Contemplating his fate, and with very little money, Levine thought maybe he should go into business for himself. What business he wondered until he read that making children’s toys was a good bet. He and his brother-in-law started up a mail-order plastic toy business and many of their products appeared in the back of my Boys Life magazine, like fake miniature shrunken heads — you know I had to have one! But it was a poolside picnic at his sister’s home in 1954 where he found his inspiration that would ultimately make him a multimillionaire. He observed an anthill, dug it up, placed the ants in a jar and was captivated watching them dig tunnels and form chambers. They developed and sold the ant farms and once obtained, you could purchase ants too. Eventually, Levine bought out his brother-in-law and formed Uncle Milton’s Industries and renamed the ant farm Uncle Milton’s Ant Farm. When he eventually sold the business, he got something in the neighborhood of $40 million dollars!

Ant Farm’s were cute, but not so much the high failure rate with copper refrigerant coils. As contractors, we had to fight tooth and nail to squeeze some level of labor reimbursement from our suppliers and/or manufacturers. Naturally, manufacturers blamed the failures on indoor air contaminates. I spoke recently with Chris Farling, APR Vice President of Branches, regarding the issues (I also had many conversations with Farling back in the 2008 to 2011 timeframe when lots of coils started leaking). One thing we found during that transition time from R-22 to R-410a (Puron as Carrier named R-410a), was the R-410a coils leaked while the R-22 coils did not, or that their leakage rate was so low that a charge would last several years before needed any additional refrigerant. Pressures in the R-22 systems were typically 182/68 psi on a 95° F outdoor air temperature whereas R-410a on that same 95° F day would be 300/125. The higher pressures we see with R-410a obviously will find more minute microscopic exit-to-atmosphere routes than will R-22. Like loads of contractors, we lost some customers and also absorbed many thousands of dollars in labor and material costs. Farling recalls shifts in customers too as many contractors decided to move to other wholesalers and other brands of equipment while also seeing an influx of new customers who were also switching to the brands APR carried, which really did not make much difference because the formicary corrosion/erosion issue was industry-wide across all brands.

Farling, myself too, always wondered what the root cause had been: The copper tubing and alloys; thinner copper tubing to boost heat exchange and efficiency; rifling the interior of the tubing for more turbulent flow and increasing heat exchanging efficiency, the change from mineral oil lubricant (R-22) to POE (Polyolester Oil R-410a); or truly the indoor air quality contaminates, or a combination of any/all of these possible things? One other thing Farling noted: Upon close examination, the mini-split line set copper tubing appears to have external scoring, which could possibly happen when the manufacturers are adding the seamless jacketed insulation.

Fortunately, that nightmare faded into history — until now. Enter mini-splits refrigerant line sets with a UV resistant exterior white jacket. Once again contractors are witnessing line sets leaking through the copper tubing and, once again, we are being told it is formic acid corrosion/erosion. Farling has been tracking the issues and striving to work with his customers. Farling said they have cut out bad sections that when swabbed with a soap solution looked like a fish tank air stone (air is pumped into the porous stone to oxygenate the aquarium water). No single manufacturer has proven to be exempt from this issue, and Farling is unaware of any manufacturer admitting there is an issue. When I spoke to Bob Kuhn at our local Thomas Somerville wholesaler branch, Kuhn informed me that Somerville stopped selling the white jacketed copper line sets once the leaking issues became apparent.

One of the primary reasons why the white jacketed insulated line sets were favored by contractors was because they are much more tear resistant than line sets covered in unjacketed insulation. And that brought me to conclude the different insulation materials themselves could be a major contributing factor. While researching this notion, I came across this HVACR School website and an article that, I think, lays bare the issues: I obtained permission to share content and pictures from the article. 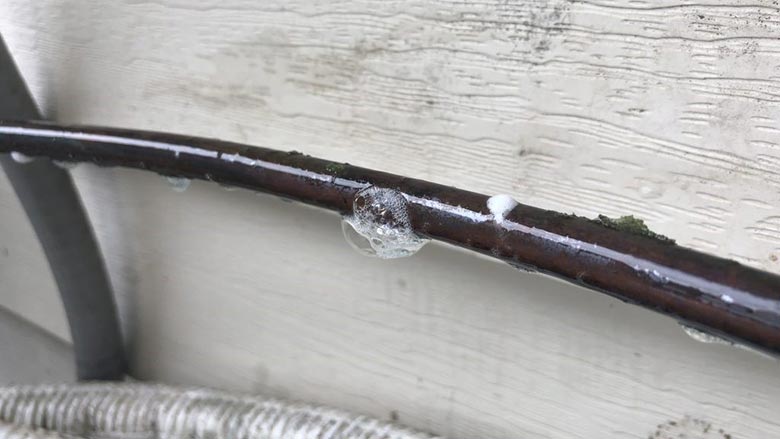 Contractor Brian Chadwick provided this picture to the HVAC School article of a leaking copper lineset once a soap solution is swabbed on the copper. 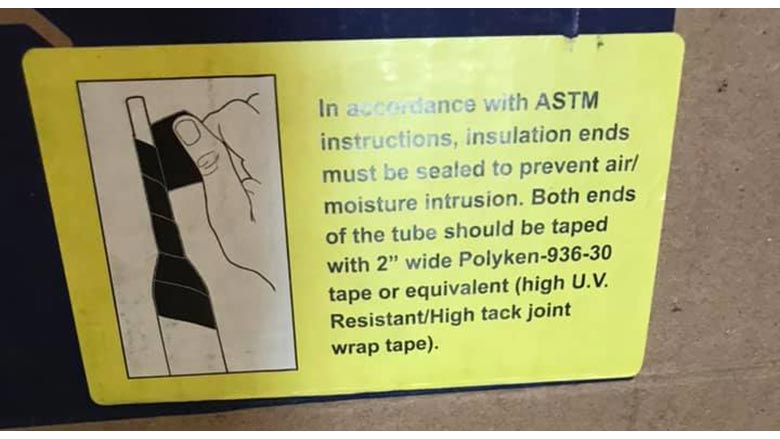 Some of the white jacketed insulation manufacturers are including instructions to seal both ends with mastic tape as illustrated in the HVAC School article with picture provided by contractor Neil Comparetto. 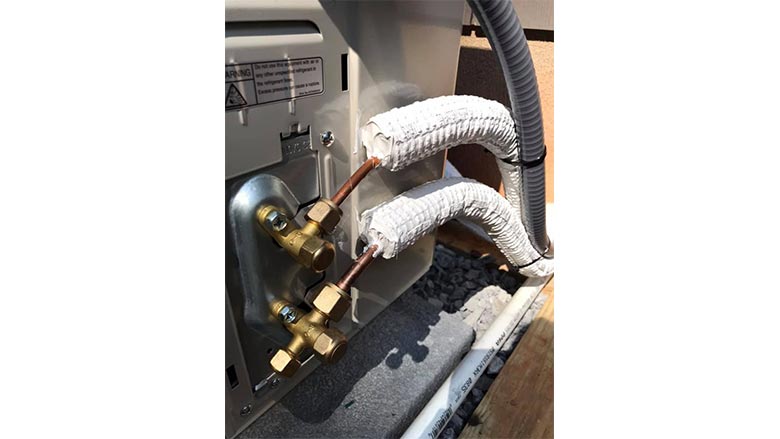 Rather than use tape to seal the ends, Canparetto also provided this picture and suggests using UV resistant calk for sealing the ends to protect against moisture gaining entry.

Why indoor copper coils and white jacketed copper line sets? Three things must be present for formicary corrosion/erosion to create the “ants nest” microscopic tunneling through the copper tubing sidewall: Moisture, oxygen and formic acid (or other organic acids). Take away any one of the three and no corrosion/erosion will be present. Indoor coils will be below the dew-point of the building’s return-air, be very wet and one benefit of air conditioning is dehumidification. Mini-split line sets require both copper refrigerant tubes be insulated, however, if air is present due to a gap between the copper tube and insulation jacket, condensation will form when the refrigerant temperature falls below the dew point. Indoor coils are subject to all manner of indoor air contaminates but that doesn’t begin to explain why white jacketed line sets are experiencing formicary corrosion when, in many cases the damage occurs outside the building and often many feet away from the insulated jacket’s termination.

I contacted Jeff Riley, operating partner at Coredron, a manufacturer’s representation firm, and who has consistently been a great resource during my career in the trades. Riley, in turn, set up a conference call with Howard Ahern with Airex Manufacturing, who turned out to be a wealth of knowledge regarding this subject and its contributing factors. According to Ahern, the “ants nest” corrosion issue is not limited to just the white jacketed insulation and he has seen it happen with virtually all line set insulation products, that said, he noted, there has been a significant increase of formicary corrosion/erosion issues with the white jacketed insulation in recent years. Ahern noted there are lots of organic contaminates in outdoor air and that sealing both ends of the insulation is not sufficient protection for an extended period of time. Ahern also stated there’s only short-term protection regarding UV degradation and cited the International Energy Code. The code indicates the insulation on line sets must protect against sunlight, moisture, equipment maintenance and wind. Ahern quoted the next line, which is often overlooked, that protection from solar radiation, which includes more than just UV degradation, must be incorporated, too.

What can be done? Airex manufactures a product called EFLEXGUARD that meets all the code-required protections. Ahern stated the No. 1 issue he sees, is failing to properly seal the ends and failing to protect the entire line set insulation and the ends with an external product that can be removed for inspecting and, if necessary, repairs. On the subject of repairs, Ahern said any splice-joints made must be adequately sealed to prevent moisture intrusion. 1% moisture gain equals 7.5% thermal efficiency loss! File that under things I did not know.

Riley cited a case he witnessed in a home that had two systems: One in the attic; and the other in the basement. The one in the attic suffered repeated formicary corrosion issues and they had the indoor air quality tested. Turned out the IAQ was far worse in the attic than in the basement. Heat in the attic, which can easily rise above 140° F, was the major contributing factor for off-gassing volatile organic compounds.

Both Riley and Ahern said that insulation maintenance is virtually non-existent within the HVAC industry and that needs to change.