Backflow preventers make their way into the connected world.

When it comes to emerging technologies — both hardware, and digital technologies — it’s likely that backflow isn’t the first thing to come to your mind. As plumbing professionals, we like to get things done right the first time. Plumbers (and backflow testers, for that matter) tend to wait until technologies have been proven before installing them.

In recent years, we’ve all seen how new technologies have dominated media coverage. Boilers are more efficient, appliances have sexy digital displays, and smart sprinkler systems can be controlled by smartphone apps. Commercial plumbing and backflow has been due for a leap forward.

With backflow devices, the fundamentals have remained largely unchanged for decades — though today they are shorter, lighter, more reliable, and easier to service. So what’s next? 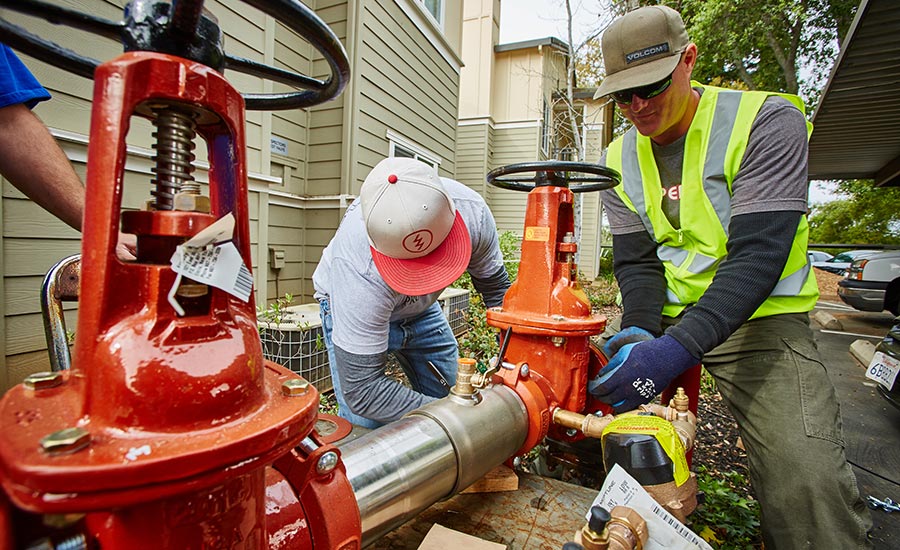 Backflow devices have remained largely unchanged for decades — though today, they are shorter, lighter, more reliable, and easier to service.

RPZ type backflow preventers integrate a differential pressure relief valve that senses pressure imbalance across the first check and opens if that differential falls below a set point. This integrated safety feature ensures that potentially contaminated water is discharged into a drain or sump rather than be allowed to flow back into clean water sources.

The relief valve also serves as a tattle-tale, as a fouled first check will cause the relief valve to discharge. While this provides a visual indication of failure — an important feature for a safety device — the valves are often in areas where discharge won’t be noticed, a challenge that could lead to property damage. A related problem could be insufficient drain size or, worse, no accommodation for drainage at all.

This “perfect storm” of challenges has led to the first major digital technology backflow preventers have brought to market — flood detection and protection devices.

These devices sense relief valve discharge, which activates an alert to users, allowing them time to address the condition before it worsens or causes damage. Given that relief valve discharge from a 3-inch RPZ backflow preventer can reach up to 500 gpm, it’s easy to imagine the need for these protective measures. The average commercial flood claim is $75,000, but can easily reach over a million dollars, especially when the discharge occurs at night or on the weekend when it may be left unaddressed for hours, or days. 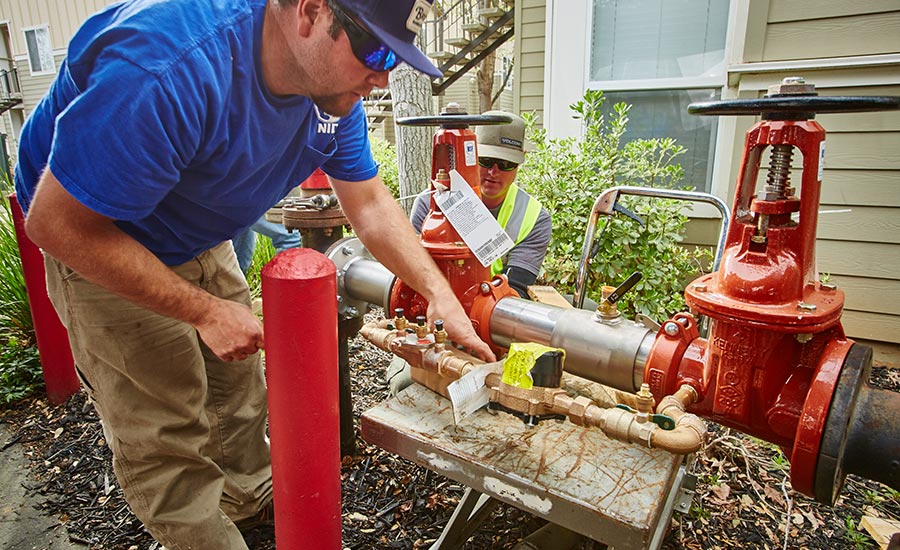 RPZ type backflow preventers integrate a differential pressure relief valve that senses pressure imbalance across the first check and opens if that differential falls below a set point. This integrated safety feature ensures that potentially contaminated water is discharged into a drain or sump rather than be allowed to flow back into clean water sources.

With the risk of flooding, why install backflow preventers in the first place? Is the risk real?  Should the possibility of contamination be taken seriously?

Consider this legal case from the Midwestern United States: A coroner’s jury ruled that the accidental contamination of dialysis machines at a large medical center was a “significant condition” in the death of two patients. Glycol had entered the system through an air conditioning make-up water valve that was left open. With the valve partially open, the water-glycol mixture in the air conditioning system was allowed to backflow into the medical center’s water system when the pressure lowered due to normal usage (i.e. toilets flushing, faucets opening, etc.). From there, the glycol made its way into the dialysis machines, and eventually the patient’s blood.

The deaths of these two patients could have potentially been avoided had the proper backflow preventer, such as an RPZ type, was used on the cross-connection between the drinking water system and the air conditioning system. In this case, backflow prevention could have made the difference between life and death. 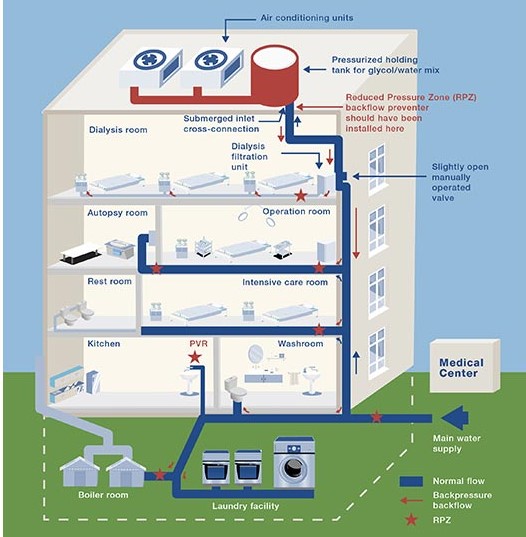 
In another example, a pesticide used for termite control was found in a New Jersey municipal water supply. A water main break had caused a negative pressure in the distribution piping, siphoning water through unprotected cross-connections. One such cross-connection was at a pesticide manufacturer. Because they weren’t protected by the appropriate backflow preventer, dangerous chemicals flowed into the water main in the two hours it took to repair the break.

As a result, 63 homes were without water for days while the lines were flushed and super-chlorinated. They were unable to cook, bathe or wash clothes. The municipality had to keep a tank truck parked in the neighborhood to provide clean drinking water, and residents were allowed to shower at local public schools. 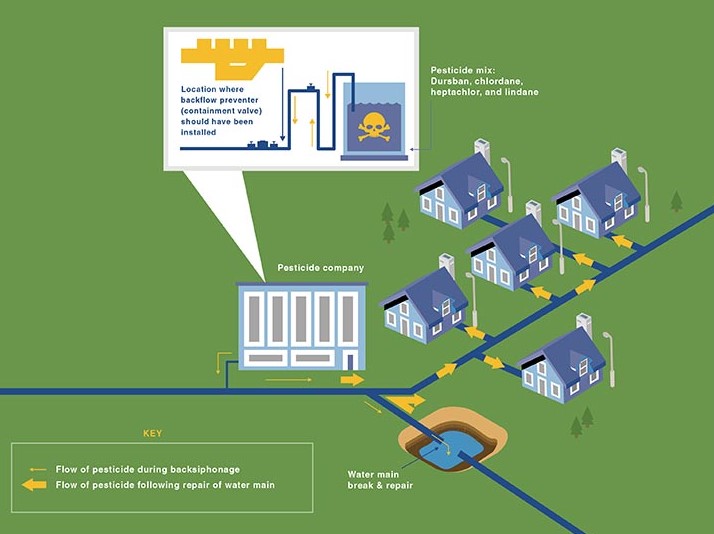 A water main break and the lack of a backflow preventer allowed pesticide to siphon from a manufacturing facility into a residential neighborhood’s domestic water supply.


New technology to the rescue

The flood alerts available to the customer vary by provider but can include text, email, and a phone call. The connection is also important. Commercial building operators are reluctant to allow a device not controlled by their IT department access to their Wi-Fi networks. So, even if a product requiring Wi-Fi access is installed, it’s unlikely to be connected and registered. Devices that operate through a cellular connection, however, may be greatly more appealing to building owners and operators, even if there is a nominal fee for the service.

These devices can communicate with an automatic shutoff valve. This is a form of Automatic Control Valve (ACV) that uses a diaphragm and a small solenoid to shut a valve. The advantage of using such a valve, as compared to something like an actuated gate valve, is that you don’t need an expensive actuator that might require a 240V power supply. By using a diaphragm, these valves need only a small solenoid in order to shut down even very large valves.

Automatic shutoff isn’t needed for every application. Hotels and hospitals, for instance, typically won’t want the main water supply shut off automatically, even if it is to prevent a potential flood. However, other businesses or applications may greatly benefit from automatic shutoff. One example is a backflow supplying a chiller on the roof. It will likely be in a mechanical room on a high floor, the perfect scenario for substantial water damage. 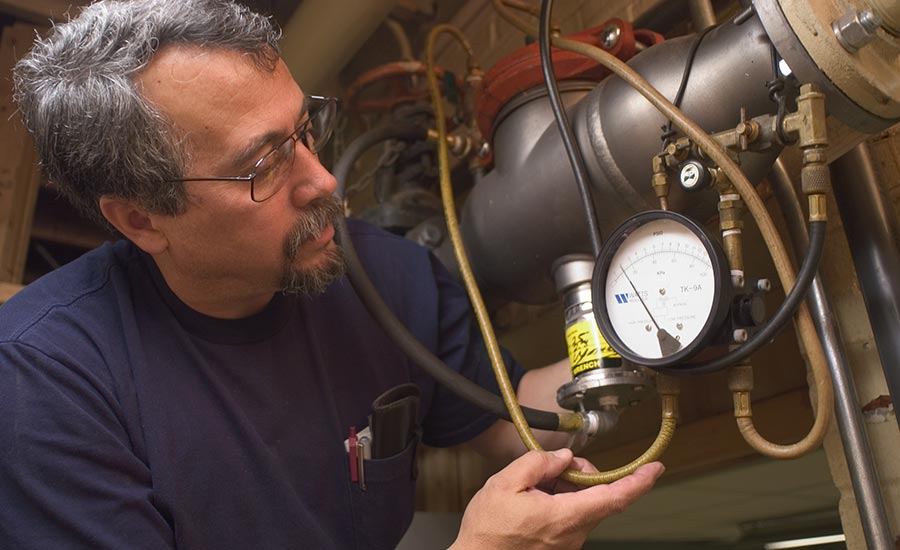 Flood detection and protection is the first real foray of backflow preventer manufacturers into making their valves smarter and connected to the internet, but what about testers?

Even backflow testing has entered a new, innovative dimension. While testing has largely been performed the same way for decades, the recording and submission of test results have evolved substantially.

Backflow testing used to be an arduous exercise with lots of paperwork. Testers could spend 20% of their time dealing with test reports and submittals — making sure they were filled out with all the necessary information, dealing with different test forms for each municipality, and submitting it through any combination of mail, fax, and email. These challenges are wasteful and costly.

For testers, backflow test management software now helps automate redundant data entry such as tester ID and credentials, test kit calibration, etc. They can even help keep track of previous tests, auto-fill forms and help the tester reach out to previous customers when they know their next backflow test must be completed. Many testers are independent or part of a small company, so this can be a huge step forward in productivity. Some systems can even submit test results automatically.

Test management software can also help simplify the test itself. Backflow test forms can be confusing because they squeeze all the required tests onto a single sheet. RPZ, DC, DCDA, RPDA, and PVB tests all have to compete for space, along with other required information for the tester and valve. To add to that challenge, many municipalities have different variations of the form. Test management software can eliminate all the wasted space so all you see on a phone or tablet are the fields that need attention.

Though the backflow prevention industry has been slow to adopt digital technology, products are coming to market that provides real value. Manufacturers and other companies in the space will continue to innovate to help make our water safer and cleaner.

Cameron Rapoport is a backflow product specialist with Watts. He works to support Watts’ backflow prevention program — providing customer assistance and training, analyzing product data and trends, and supporting new product development. He can be reached at Cameron.Rapoport@wattswater.com.