After more than 240 years of honorably serving the country, the U.S. Army is getting its own museum. Sited on a hilltop at Fort Belvoir in northern Virginia, the National Museum of the U.S. Army occupies more than 80 acres of grounds and features 185,000 square feet of exhibition and support space. The museum initially opened on Veterans Day in November 2020; however, it temporary closed its doors on Dec. 14, 2020 due to the worsening COVID-19 pandemic. It recently reopened to the public on June 14. 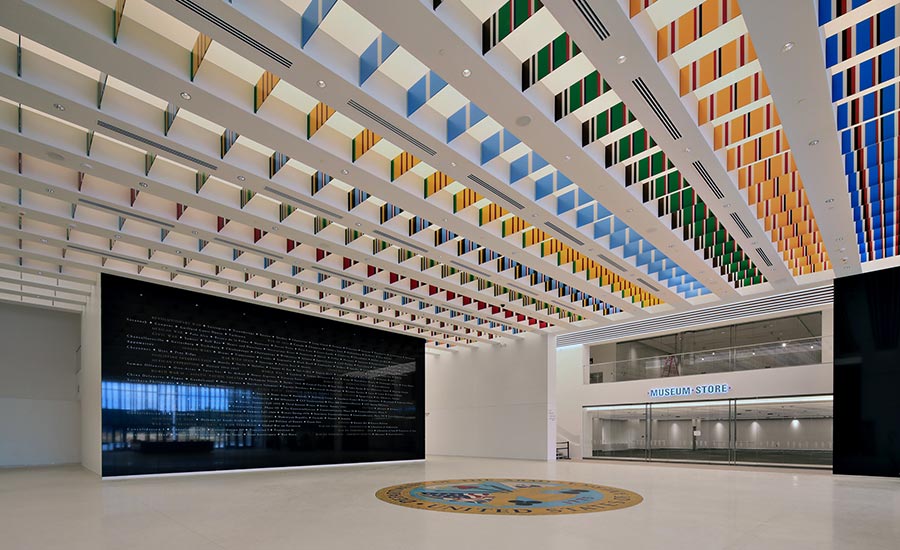 The 8,600 square foot lobby of the National Museum of the U.S. Army welcomes guests into the building. Illuminated, glass panels overhead represent each of the Army’s 190 campaigns and corresponding streamers. At the southern end of the space, an engraved installation wall commemorates each of the U.S. Army’s battles and a 21-foot Army emblem is inlaid into the center of the Lobby’s terrazzo flooring. The lobby is one of the spaces that features a REHAU radiant heating and cooling system below the flooring to keep guests comfortable during their visit. Photo courtesy of Duane Lempke/The National Museum of the U.S. Army
Museum visitors enter through a spacious lobby with a 35-foot ceiling that features representations of the Army’s history. An engraved Honor Wall at the southern end of the lobby commemorates each of the battles fought in the Army’s history. The lobby leads to a vast, open exhibit hall — “Essentially, an airport hangar,” saysJason Calcagno,project manager during the museum’s construction for Southland Industries, the design-build company that served as the mechanical engineer for the project.

Temperature control for the exhibit hall and the lobby is provided, in part, by a REHAU radiant heating and cooling system. Calcagno explains that this technology is ideal for this application, because the environment is controlled near the ground for visitor comfort, while energy is conserved by reducing the heating and cooling requirement in the air space higher up. 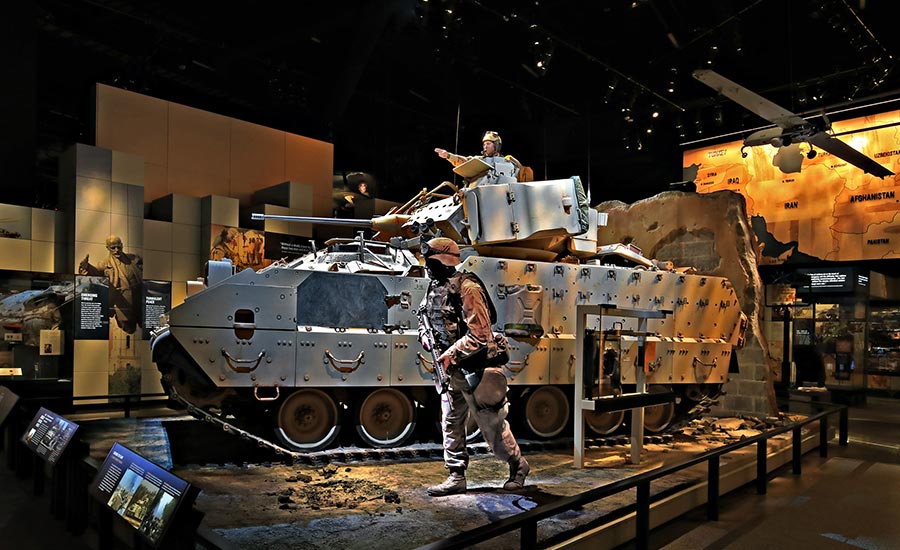 The M3 Bradley Fighting Vehicle was in the 2003 charge from Kuwait to Baghdad, where the vehicle and its team were essential to gaining control of several key positions including Baghdad International Airport before the advance into the city. In the museum, buried underneath the vehicle with concrete is REHAU INSULPEX pre-insulated PEXa piping used for radiant heating and cooling. Installing this piping was a challenge due to the weight of several of the exhibits, including the 25-ton Bradley Fighting vehicle. The installation not only required extra-heavy concrete slabs, but the vehicle is tethered to the concrete, which risked puncturing or otherwise damaging the RAUPEX O2 barrier piping. Photo courtesy of Duane Lempke/The National Museum of the U.S. Army


A dedicated outdoor air system (DOAS) provides ventilation and humidity control. Combining radiant and DOAS for space conditioning significantly reduces the amount of HVAC energy, which in REHAU’s experience has been as much as 35% when compared to a standard forced-air system. The DOAS/radiant system should lower operating costs for the Foundation. 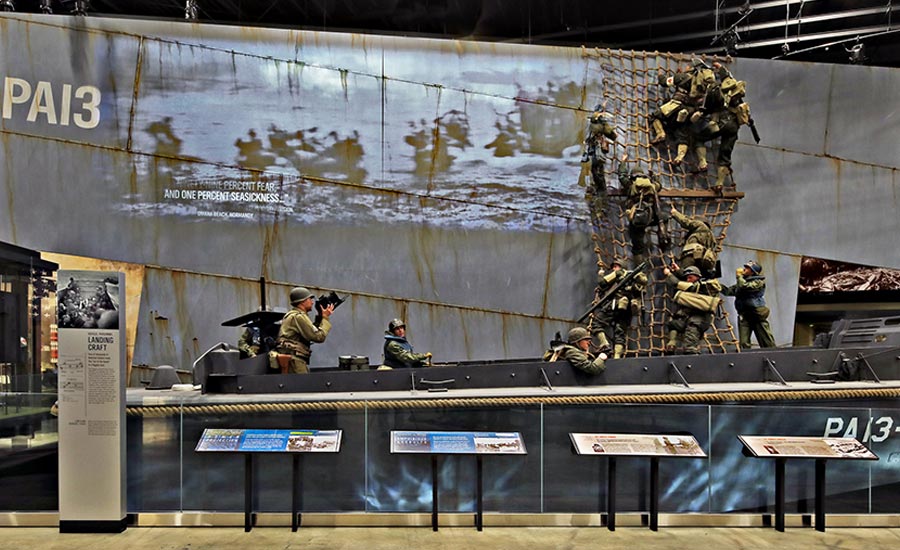 The Higgins assault boat, shown in this exhibit, is known officially as a Landing Craft, Vehicle, Personnel (LCVP) and landed more Allied troops on beaches in Europe and the Pacific than all other types of landing craft combined. Valuable historic exhibits such as the Higgins assault boat is one example of why the switch to REHAU INSULPEX pre-insulated PEXa piping was made. Unlike alternative options, including sending temperature-controlled water through piping installed overhead, the REHAU INSULPEX installation keeps energy distribution piping safely beneath the exhibits. Photo courtesy of Duane Lempke/The National Museum of the U.S. Army

Original designs called for sending temperature-controlled water from the mechanical room to the conditioned space through copper or steel piping installed overhead. Calcagno notes the decision to switch to REHAU INSULPEX pre-insulated PEXa piping, buried below the concrete slab, ultimately made more sense for several reasons. For starters, the exhibit hall will feature valuable artifacts, artwork, documents, and images. Any leak from a pressurized pipe running overhead poses a risk for damaging the exhibits. The INSULPEX installation keeps energy distribution piping safely beneath the exhibits.

Installing the hydronic distribution piping system below the floor saves a significant amount of money in labor costs, a conclusion reached by other Southland offices who had already used INSULPEX. The primary contributor to labor savings is the continuous coil lengths that require fewer fittings. In addition, Calcagno points out, it also poses less safety and schedule risk for the installers, as they do not have to work 35 feet in the air over such an expansive space.

“We were able to excavate 3 feet down to install INSULPEX, which comes with supply and return wrapped into one insulated pipe, before the building was erected, thus avoiding conflicts with other trades,” Calcagno says. 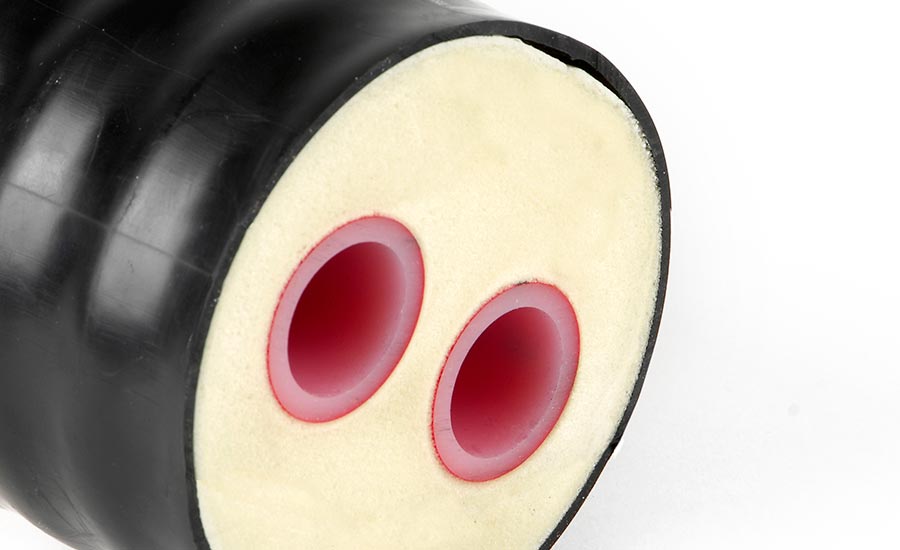 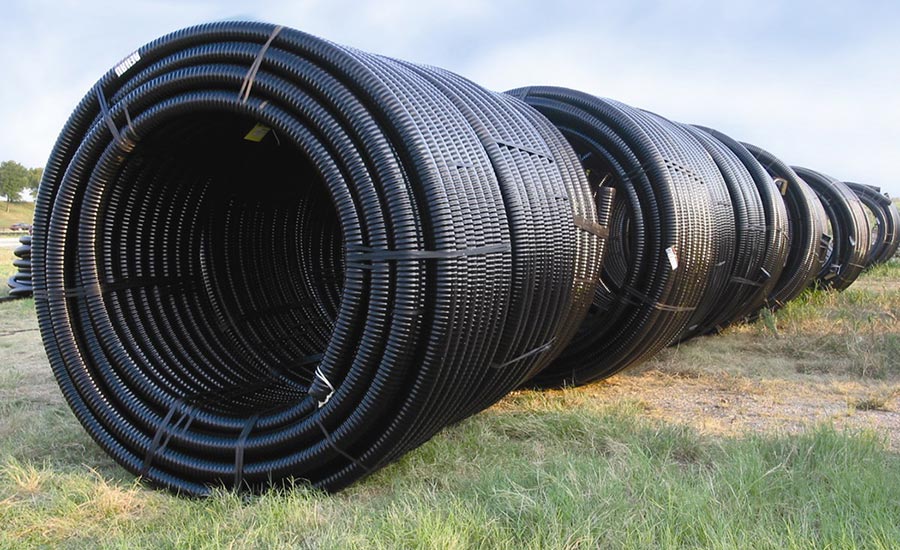 Engineered to minimize energy loss during transfer of hot or chilled fluid through buried pipelines, INSULPEX consists of PEXa O2 barrier pipe surrounded by foam insulation and a durable corrugated PE outer jacket. Offered in a two-pipe configuration that combines supply and return in a single pipeline and in coil lengths up to 985 feet, this system eliminates jobsite welding, insulating and corrosion-protecting measures. Photo courtesy of REHAU

A ton of weight

One challenge the Southland Industries crew encountered was how to design the radiant floor most appropriately to accommodate the museum’s heavy displays. A 25-ton M3 Bradley Cavalry fighting vehicle used to transport soldiers in 2003, the first year of the Iraq War, was the first artifact to be installed in the museum, followed by a Sherman tank. Canons and other heavy artillery are also displayed. The weight of these exhibits not only requires extra-heavy concrete slabs, but each is tethered to the concrete, which risked puncturing or otherwise damaging the RAUPEX O2 piping below the flooring.

The REHAU design department worked to accommodate the various exhibits by placing the pipe deeper than usual into the slab, at 5 3/4 inches, rather than 2 inches, but ultimately, project engineers were more comfortable running the radiant circuits around the heaviest exhibits. “The system is efficient enough that we could take it out and still meet the load necessary to heat and cool the space,” says Michael Morder, design engineer for Southland Industries.

Support from Sales Manager Mike Norris before and during construction made the decision to use the REHAU radiant heating and cooling systems even easier, notes Calcagno. “They understand the system’s capabilities and flexibility best. It has been a real plus to talk through challenges and use their ideas when adjustments needed to be made.”

With the museum finally opened to the public, the climate control system will be hard at work keeping guests comfortable and protecting the heavy artillery and precious artifacts that will be seen for the first time by the American people.

Ryan Westlund is a senior manager, radiant heating and cooling with the building solutions division at REHAU. He serves on the Industry Advisory Board for Center for the Built Environment (CBE) as an advocate for research to further building technologies and bridge academia with industry. He holds a bachelor’s degree in mechanical engineering from Rose-Hulman Institute of Technology and is pursuing an master’s degree in sustainability management from American University’s Kogod School of Management. He can be reached at: ryan.westlund@rehau.com