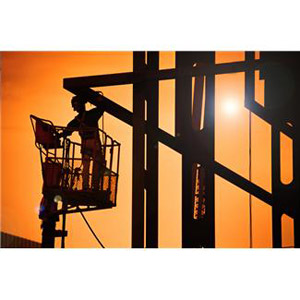 Total hours worked in construction increased by 2.3% over the year, implying that contractors are lengthening working hours and also hiring new workers. The unemployment rate for former construction workers dropped from 17.7%, not seasonally adjusted, in January 2012 to 16.1%. Residential construction employment (residential building and specialty trade contractors) rose by 14,500, seasonally adjusted, for the month and 53,200 (2.6%) for the year. Nonresidential employment (building, specialty trades and heavy and civil engineering construction) climbed 13,700 in January and 48,900 (1.4%) over 12 months.

Construction spending in December totaled $885 billion at a seasonally adjusted annual rate, the highest rate since September 2009 and the ninth consecutive monthly increase, the Census Bureau reported Feb. 1. Totals for November and October were each revised up about 1%, while the December figure was 0.9% higher than in November and 7.8% higher than a year ago. Full-year spending totaled $850 billion, the most since 2009 and a rise of 9.2% from 2011 but still 27% below the peak year, 2006. Private residential construction spending jumped 2.2% for the month, 24% December-to-December and 17% for the full year.

Real (net of inflation) gross domestic product dipped 0.1% at a seasonally adjusted annual rate in the last quarter of 2012, after growing 3.1% in the third quarter. Steep declines in government purchases and investments, net exports and inventories offset increases in consumer spending, business equipment and residential investment, the Bureau of Economic Analysis reported Jan. 30.

Anticipating the GDP report, a quarterly survey of 65 corporate economists that the National Association for Business Economics released Jan. 28 found “business activity advanced at a steady pace in the fourth quarter of 2012 … More than one-quarter of survey respondents said that their firm postponed at least some hiring and capital spending in the three months leading up to the then-impending fiscal cliff … Expectations for capital spending on structures over the next year were positive [among 43 respondents to this question], but weaker than three months earlier …, with a smaller share of panelists expecting their firms to increase spending and slightly more expecting … to reduce it or keep it the same.”

Nonfarm payroll employment, not seasonally adjusted, increased in 283 out of 372 metropolitan areas, between December 2011 and December 2012, decreased in 83 and was unchanged in six, BLS reported Jan. 30. Construction employment increased in 139 out of 337 metro areas (including divisions of large metros) for which BLS provides data, shrank in 133 and was stagnant in 65, according to an AGC analysis released Jan. 30. (BLS combines mining and logging with construction in most metros to avoid disclosing data about industries with few employers.)