PME looks at the fire protection industry through photographs of the people who do all the work.

A minimum of three firefighters, including one that is a paramedic, ride a rig like this on every call received by Station No. 2 in Carol Stream, IL.

Mike Lesiak readies a sprinkler for fire testing on a ProPress copper fitting at the Underwriters Laboratories agency testing facility.

Volunteer firemen waiting for the next call.

A student poses by a fire engine during Fire Prevention Week activities. Fire departments often target fourth grade classrooms for educational activities throughout the year because fourth graders are old enough to comprehend advanced concepts of fire prevention and will share what they learn with other younger children and also their parents. 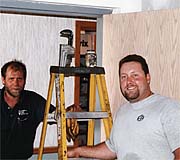 Volunteer fire companies have been part of Americana since 1736. George Washington served as a volunteer fireman in Alexandria, VA, prior to the American Revolution. In addition to some of today's volunteer firemen pictured above, here is a short list of some other notable U.S. citizens who once nobly served as volunteer firefighters: James Buchanan, Millard Fillmore, Alexander Hamilton, Thomas Jefferson, Paul Revere, Aaron Burr, Samuel Adams and John Hancock.