An example of modern hydronics versatility.

The system presented in last month’s column is a complete system for those committed to operating the cordwood gasification boiler whenever the thermal storage tank has cooled to the point where it cannot maintain comfort in the building. Wood burning “purists” would be fine with this system. However, others may want to enhance its ability to maintain building comfort at times when the wood-burning boiler is not active and thermal storage is depleted.

Perhaps the owner wants to go on a winter vacation and no one is available to keep the home fires burning. Or maybe there are times when the owner just doesn’t want to bother firing the boiler. Whatever the reason, the versatility of modern hydronics technology makes it easy to add an auxiliary boiler.

Some of you may be thinking no big deal, just pipe an auxiliary boiler in parallel with the cordwood gasification boiler, and let it heat the thermal storage tank when the cordwood boiler is off. Although this could be done, it would force all heat to pass through thermal storage on its way to the load. One might argue that the thermal storage could act as a giant buffer tank. That’s true, but the multi-hundred gallon tanks used with cordwood gasification boilers have a lot of surface area, and thus, the potential for relatively high standby heat loss. That approach would also be “offensive” to the second law of thermodynamics because it converts high grade energy, stored as fuel, into low grade energy (e.g., heat) before it’s needed by the load.

Figure 1 shows a mod/con boiler connected to the load side of the system using a pair of closely spaced tees. In rural settings where cordwood gasification boilers are more common, the mod/con boiler would likely be fired by propane.

If the wood-fired portion of the system is not operating, circulator (P2) would be off. Flow returning from the zones passes through the secondary side of the heat exchanger, and then absorbs heat at the closely spaced tees beneath the mod/con boiler. The remainder of the distribution system uses zone valves and a variable-speed pressure-regulated circulator.

Whenever an auxiliary boiler is added to a system with a thermal storage tank supplied by a renewable heat source, it’s important to prevent heat generated by the auxiliary boiler from entering that tank. Although this situation, if allowed to occur, wouldn’t damage the system, it again violates the thermodynamic principle of not converting high grade energy into low grade energy until it is needed by the load.

Fortunately it’s easy to add this control functionality to the system. Just install a differential temperature controller that compares the temperature of the water in the upper portion of the thermal storage tank to the temperature returning from the distribution system. This controller is designated at (T156) in Figure 1. 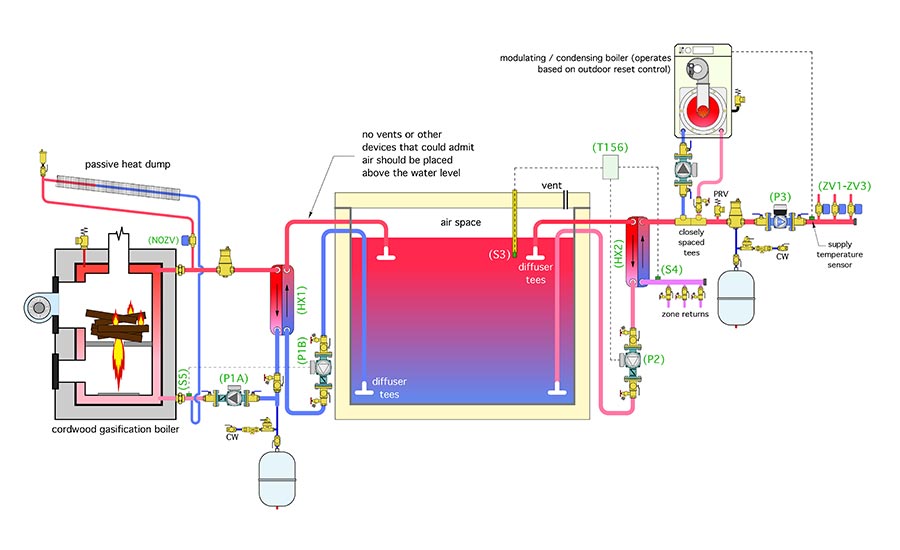 The on and off differentials suggested above, (e.g., on when S3 ≥ S4+10°, and OFF when S3 ≤ S4+7°) are only suggested values. They are based on an assumed approach temperature of 5° across the upper side of the heat exchanger, and some allowance for sensor tolerances. Modern differential temperature controllers allow these differentials to be adjusted over a wide range.

I’ll close out with a summary of important details needed in this system:

Follow these details and you’ll create a smoothly functioning renewable energy system that will automatically ensure comfort is never compromised.