Keeping heat produced by an auxiliary boiler out of thermal storage.

Most hydronic heating systems that have renewable energy heat sources, such as solar thermal collectors, an air-to-water or geothermal heat pump or a biomass boiler also have an auxiliary heat source. In most cases, that heat source is a boiler, especially when an existing system is being retrofitted with a renewable heat source.

Many of these systems also have one or more thermal storage tank that absorbs excess heat when it’s available from the renewable heat source, and park it for later use. The thermal storage tanks used in systems with solar thermal collectors and biomass boilers often contain several hundred of gallons of water.

The rationale for the latter is based on the second law of thermodynamics. Fuels such as natural gas, fuel oil or electricity are “high grade” energy. It’s easy to store high grade energy for long periods of time without degradation. However, when high grade energy is converted into heat, which at the temperatures needed for space heating is a relatively low grade energy, storing it for more than a few hours is difficult and expensive.

Regardless of how well insulated the tank was, heat would immediately begin “leaking” from it. The insulation system on the tank would affect the rate of heat loss, but no insulation system can totally stop heat transfer as long as there’s a temperature difference between the inside and outside of the tank. The moral: Don’t use high grade energy to keep a thermal storage tank at an elevated temperature while waiting for a load that eventually needs that energy.

One of the undesirable characteristics that I’ve witnessed on several systems with renewable heat sources is an inadvertent set of circumstances where heat created by the auxiliary boiler ends up in the thermal storage tank.

In one system that I had opportunity to visit, the thermometer on a 700 gallon thermal storage tank associated with a pellet boiler showed an internal temperature of 145°. That, in itself, isn’t a problem. However, it became a problem when the person responsible for the system told me that the pellet boiler had not operated in over a month due to a maintenance issue.

So how was the tank maintaining that elevated temperature when the boiler intended to heat it had been off for a month?

The answer was a 3-phase electric auxiliary boiler. To add salt to the wound, this system was in a location where electricity was provided from large diesel-powered stationary generators, and thus it was quite expensive.

This system had building automation controls that staged the pellet boiler and auxiliary electric boiler, but those controls didn’t “understand” that the pellet boiler was not operating due to some fault condition. The control system kept the circulator between the thermal storage tank and distribution system operating as it supplied heat to the system from the electric boiler, which was treated as a second stage heat source. The water returning from the distribution system flowed in and out of thermal storage, and thus unnecessarily maintained it at an elevated temperature. While it’s arguable that this doesn’t damage the system, it certainly adds to uncontrolled heat loss into the mechanical room.

This inadvertent condition is usually the result of controls that treat the renewable heat source portion of the system as fixed first stage heat input, and the auxiliary boiler as the second stage heat input. That’s how a tandem boiler system would typically be controlled, and thus it’s how many control systems would be routinely configured.

This is not a “big deal” when two identical boilers serve as the first and second stage heat inputs. However, when a large thermal storage tank is involved, there is much greater potential for uncontrolled heat loss due to its high surface area and large thermal mass. Furthermore, if the circulator between that tank and a biomass boiler remains on when that boiler is not producing heat, the boiler’s jacket and air flow through the combustion chamber further increase uncontrolled and undesirable heat loss. There is no automatic flue damper in a biomass boiler to limit off-cycle stack losses.

This doesn’t need to happen

There’s a relatively easy and inexpensive way to prevent this undesirable condition. To understand it, consider a system that uses a biomass boiler and its associated thermal storage tank as the first stage heat input.

The “biomass heat source” is treated as a fixed lead heat source to the distribution system, in combination with and auxiliary boiler as the second stage heat source. This combination is shown in Figure 1. 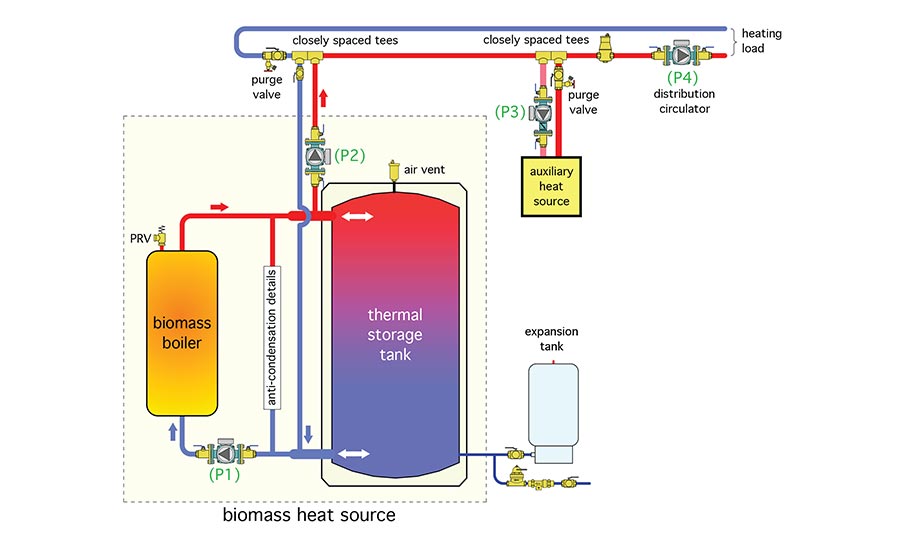 The white rectangle labelled “anti-condensation details” represents some provision for maintaining the inlet temperature to the biomass boiler above dew point whenever possible. There are several hardware possibilities for this detail. The three commonly used hardware configurations for this detail include a 3-way thermostatic mixing valve, a motorized 3-way mixing valve or a “loading unit” which combines a thermostatic mixing valve with a circulator, and thus eliminates the need for circulator (P1).

The auxiliary boiler is also connected to the distribution system using a pair of closely spaced tees for hydraulic separation. These tees are located downstream of the tees that connect the biomass heat source to the system. This arrangement allows the thermal storage tank to contribute heat to the distribution system at lower temperatures than would be possible if the tees for the auxiliary boiler were upstream of those from the biomass heat source.

If the auxiliary heat source is a conventional boiler (e.g., one that is not designed to operate with sustained flue gas condensation), the distribution system will, at times, operate at low water temperatures, (typically below 130°), then an anti-condensation detail should also be included to protect the auxiliary boiler. 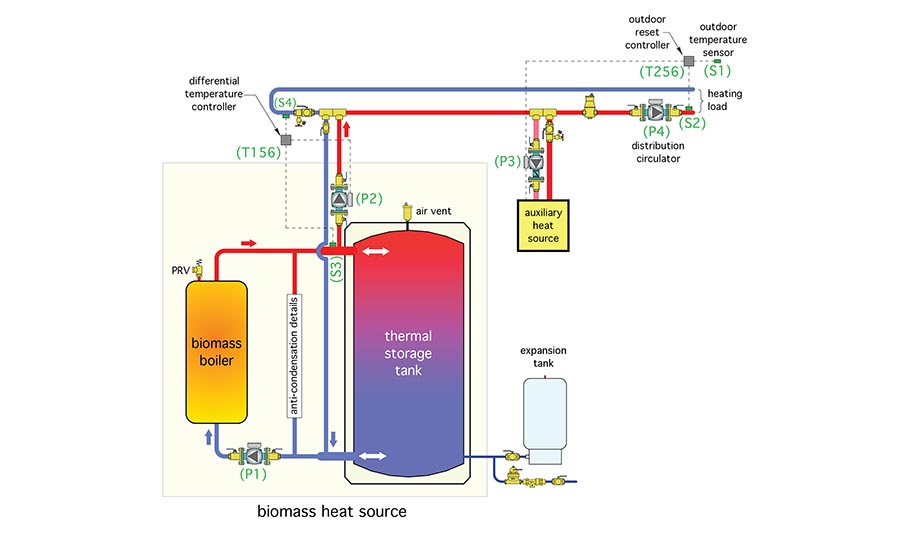 The on/off temperature differentials of 5° and 3° are only suggested values. They include an allowance for temperature sensing accuracy. To minimize sensing error it’s best to use identical mounting techniques for both temperature sensors.

The outdoor reset controller, labelled as (T256) in Figure 2, turns on the auxiliary boiler and circulator (P3) when and if the water temperature supplied to the distribution system at sensor (S2) falls slightly below the current “target” temperature so that it can maintain adequate heat delivery to the loads. Using an outdoor reset controller to “decide” when the auxiliary boiler needs to operate allows the biomass heat source to contribute heat to the lowest possible temperature that can still maintain building comfort. That, in turn, allows for longer biomass boiler burn cycles, which improve efficiency and reduce emissions. 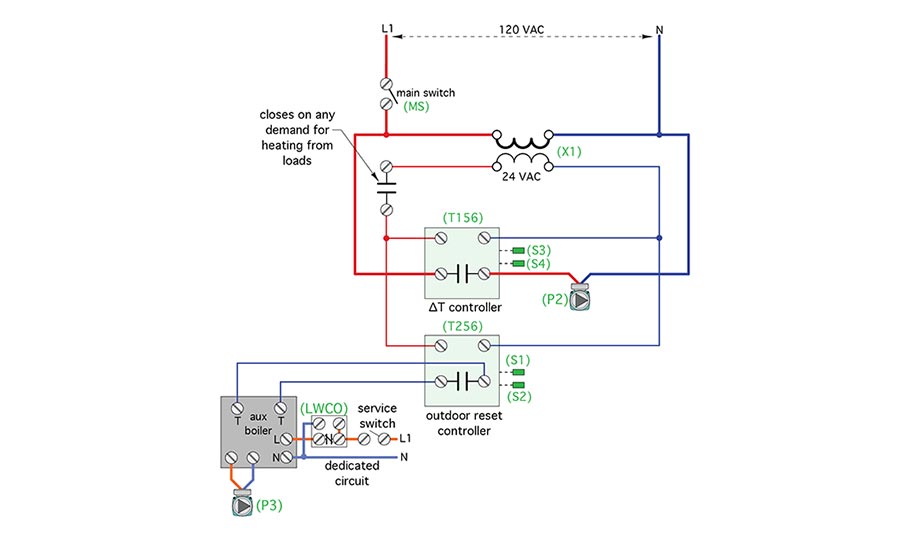 The combined logic provided by these two controllers, or their equivalent programming within a building automation system, is simple but effective. It prevents the system from “running blind” to a condition where heat from the auxiliary boiler is flowing into thermal storage.