This website requires certain cookies to work and uses other cookies to help you have the best experience. By visiting this website, certain cookies have already been set, which you may delete and block. By closing this message or continuing to use our site, you agree to the use of cookies. Visit our updated privacy and cookie policy to learn more.
Home » pme’s 2019 Plumbing Engineer of the Year: John Gregory
Market SectorsGreen PlumbingGreen Mechanical SystemsPlumbing & Mechanical & Fire Codes

Henderson Engineers’ John Gregory is the classic case of a self-made man.

Gregory grew up in the central Illinois town of Normal where he worked as a janitor at a local medical facility while in high school. That work continued after high school and during a stint at a technical school in nearby Bloomington.

“I was going to tech school eight hours a day and then working eight hours a night at the hospital and then going home and getting a couple hours of sleep,” he says. “That was five days a week and almost 365 days a year.”

Gregory’s ultimate path to being a plumbing and mechanical designer stemmed from his enjoyment of drawing and, as he puts it, “tinkering and fixing things. 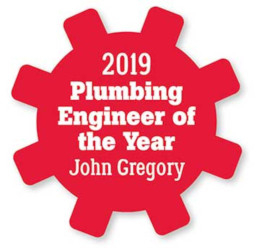 “One thing led to another and I got into the drafting side of things and kept learning plumbing design throughout the years,” he says. “I learned through the school of hard knocks, and was able to learn from a group of well-respected engineers and designers over the years. I’ve continued on my own picking up little tidbits here and there along the way.”

At the age of 6, Gregory’s fascination for tinkering once led him to a family record console. “It was one of those big boxy-type things with the record player inside,” he says. “The record player had stopped working, so I started tinkering with it and found that a peanut had gotten wedged in there and that’s what kept it from working. Along the way I started tinkering and creating things. I’m known as the jury-rig king at home now.”

He’s also known as one of the most well-respected designers in the game. This ASPE member, who is one of the industry’s foremost authorities on medical-gas design and code-related matters on that subject, is the recipient of the 2019 pme Plumbing Engineer of the Year honor.


Soaking in the knowledge

Gregory started his designing career back in 1988 and has worked for firms across the country. After a 10-year run at Phoenix-based HDR, he joined Henderson’s Phoenix office in 2018 where he is a senior plumbing designer. “I have enjoyed every stop along the way and I’ve learned a lot from each stop,” he says.

And that’s where Gregory thrives — the information and knowledge gathering part of his professional life. “For me, it’s the interaction with young designers as well as older ones,” he says. “I’m kind of moving into that older gray-haired category now, wait, no hair. I have learned something from everyone I have encountered: Young, old, it has not ever mattered. I try to learn something new and get better at what I do every day.

“I’ve picked up on how to do things many ways by engaging with contractors, code officials, inspectors and verifiers in the field. Being out in the field and seeing things firsthand and being able to correct issues directly has made a big impact in my designing perspectives. This goes back to my tinkering that started when I was a little kid. I like to work with complicated things, and I get to do that in the field and have an impact. Our plumbing industry is always changing. You need to be open-minded and accept different ideas and concepts because there are many ways to skin the proverbial cat.”

Gregory adds he has had plenty of great teachers and mentors along the way. “I’ve had several mentors through the course of my career,” he says. “Joe Messina and Carl Yrjanainen from my last employer are a couple of them, and Mike Scott from my early years. Now, I have a group here at Henderson that is impressive and awesome in its own right.”

Gregory counts his youngest daughter, Trista, (shown together on the cover of this issue) as a mentor as well. “She’s a high-school senior and did a science project on Legionnaires’ disease and she’s done some pretty amazing things with it,” he says. “I look to Trista as a mentor as far as what she’s done on the science side.”

One constant, Gregory notes, in his path to success is being a good listener. “If you are a good listener, you understand what the client wants from you, and from there you can get involved and ask questions they may not have even considered,” he says. “Listening plays a big part, and so does being able to communicate what is needed to all parties involved.”

Gregory says he loves getting out in the field on jobsites. “I really enjoy being involved in the process from start to finish,” he says. “I like being out there doing hospital assessments, doing as-builts and doing hand-over-hand tracing of medical gas piping, including problem solving. Identifying those problems at a facility, then taking those findings and coming up with solutions, while keeping the owner in mind is what drives me.

“To understand what you are starting with, you need to get into the field to verify the existing conditions and talk with the end user to get some input from them on how they use it, so you have an understanding of what you are providing them so it functions in a way that helps them best,” Gregory continues.

“When you are in the field and involved, you can get that done. You also are out there having interactions with contractors who are installing the products. I can learn other ways to do certain things by the way they are proposing to do those things, and then evaluate if that is a more sound approach to implement your designs. It helps me become a better designer by having field and hands-on experience. Everything regarding being in the field and having the hands-on interaction makes me a better designer.”

Gregory has a long-standing keen interest in medical gas design. He says part of it stems from his consistent involvement as a younger man working in that hometown medical facility. Currently, he’s a voting principal on the NFPA 99 Technical Committee on medical gas and is the co-chair of the Arizona PIPE medical gas committee.

“My family has been involved in health care for a long time,” he says. “For me, medical gas was not an intentional involvement. I fell into it. As I got more involved with it, I started getting more interested in the medical gas side of things. I love being involved in the NFPA 99 Committee and helping create, develop and progress the medical gas industry from the codes side of things; trying to help make the systems out there safer for everybody. I like having an impact, and by being involved I can have that effect.”

Gregory calls the medical gas side of things one of the more important aspects of being a plumbing designer in health care. “To me, Legionella is right up there with it,” says Gregory, who notes a current interest in the dental side of the industry. “Medical gas is right above it. It’s important because it impacts everybody who, at some point, is going to be connected to one of those medical gas systems. It’s about being patient-safe. My family or your family might be connected to it.

“You hear a lot of horror stories about patients getting injured by cross-connections or some other aspect of an installation. We have the ability to correct that. Being involved helps address and identify those issues that are apparent so we can get the word out so people are aware of these types of issues and things designers should consider doing as part of their everyday routine.”

One of Gregory’s most memorable medical gas projects involved some creative tinkering. “We had a project that dealt with medical air plant replacement,” he says. “We were basically taking source equipment offline to make a connection. We had to find a way to keep the supply going without taking anything offline, even for a short period of time. I used several H-cylinders to feed into the main by the source equipment, which allowed us to bypass said source equipment. There were no alarms or problems and it saved the facility a lot of money in the long run. It was an inventive way of doing that shutdown. Before we even tried this idea out, we tested it first during the high point of usage in the day and it worked without any issues.”

Being involved in different aspects of the industry is another aspect of Gregory’s growth on the educational front. “I enjoy the camaraderie of everybody I run into within the industry,” he says. “I’m learning from them and they’re learning from me. By being connected, we have the ability to share experiences and proper procedures for doing things. I consider it my continuing education.”

Gregory’s continuing education stretches outside the engineering community. He’s a fourth-degree black belt in Tae Kwon Do. “I started about the same time I started as a janitor at the hospital,” he says. “A friend of mine worked security there. He trained me to a certain level and then took me to his own instructor to further what he taught me. I enjoyed it and kept going. Then I started teaching in Colorado. One of my instructors once said you learn more from teaching, which holds true even now.”

And Gregory is more than eager to impart his plumbing design wisdom on the industry’s next generation. “I like being in the trenches, but I also know that I need to be on the other side of it to where I am nurturing the next generation and helping them succeed and move up the ladder like I have,” he says. “It’s my turn to pass on the information I’ve learned and help the next generation become better than the last.”