The geothermal heat pump market is headed for another strong year in 2019. The 30% uncapped federal income tax credit on EnergyStar-rated geothermal heat pumps remains in full effect. Additional incentives are available from some state-level programs and electric utilities.

Interest in using solar photovoltaic systems to supply electrical energy to homes is also strong and looks to remain that way. In 2018, California become the first state to mandate use of solar PV systems in all new homes by 2020. Several state and federal incentive programs also generously support PV installations.

Younger homebuyers show increasing interest in the concept of “net zero” homes, which requires electricity sourced from either an onsite solar PV system, or buy-in to a cooperative “community level” PV system. A recent study by Deloitte finds “64% of millennial consumers say increasing the use of solar power” is their No. 1 priority.” And millennials are currently making up the largest percentage of homebuyers, that according ECHOtape’s 2019 housing and construction market trends to watch.

There’s a conspicuous convergence in all of this. The combination of geothermal heat pumps operating on renewably-sourced electricity, especially at a time when both are significantly incentivized, is sure to be of interest in the new-home construction market.

Although both geothermal heat pumps and solar PV systems will eventually have to compete in an unsubsidized market, as they should, our politicians currently have put “money on the table” for the taking. Why not leverage this opportunity to increase the market value of a home, or qualify that home for a “green” mortgage with more favorable rates?

Reality check: It’s easy to get caught up in the current buzz surrounding geothermal heat pumps. They currently are a “darling” within the HVAC industry, as well as with energy policymakers, politicians, and prospective buyers interested in reduced carbon footprints or other altruistic priorities. That’s all fine to savor, but as you do, never forget that your customers still want to be comfortable, and they expect you, as a comfort professional, to keep them comfortable.

Most of the geothermal heat pumps installed in the North America are water-to-air heat pumps.  They extract heat from a buried earth loop — using hydronics technology, but deliver heating and cooling through a ducted forced-air system.

Although ducted forced-air distribution systems are widely accepted for cooling, they are hard-pressed to deliver comfort comparable to that provided by a well-designed and properly installed hydronic heating distribution system.

So why not “marry” the thermal performance and renewably-sourced energy available from geothermal heat pumps with the superior comfort of hydronic heating? 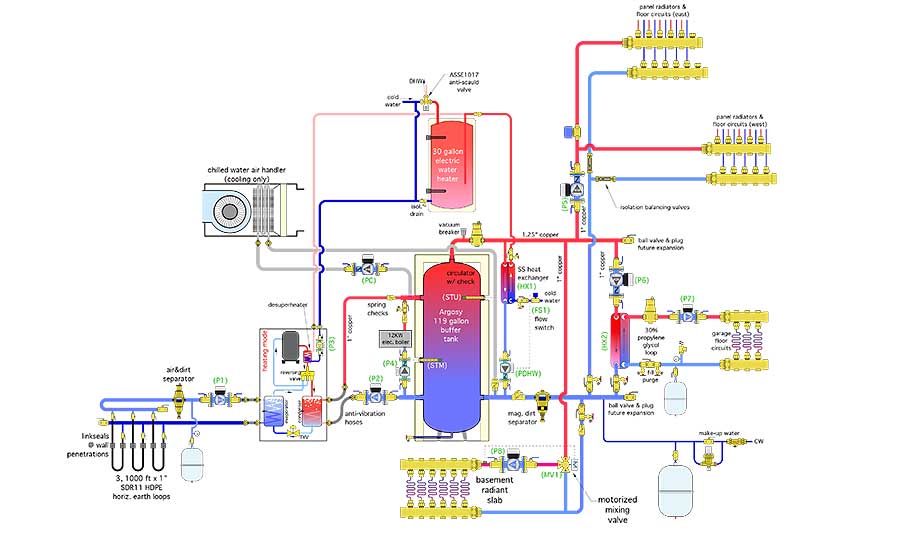 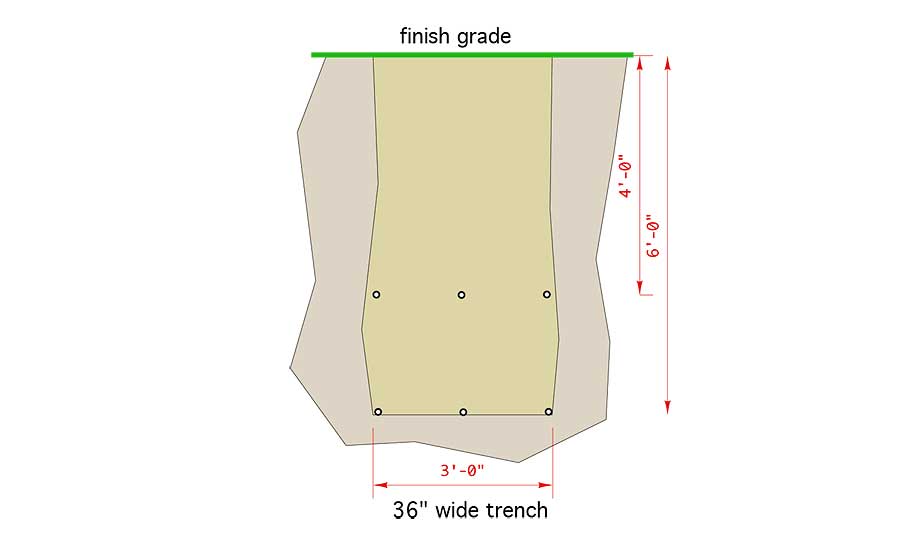 Four pipes are buried 6 feet below the surface. They do a U-turn at the end of the trench, and return to the building at the 4-foot level. This loop design is specific to the heat pump’s capacity, the building location (upstate New York), and the soil type (heavy, wet clay). Different circumstances could require different loop field designs.

The piping enters the home’s basement through eight 3-inch diameter holes cast (or bored) into the poured concrete wall. Each pipe penetration is equipped with a LinkSeal expanding collar to provide a watertight seal, as illustrated in Figure 3. 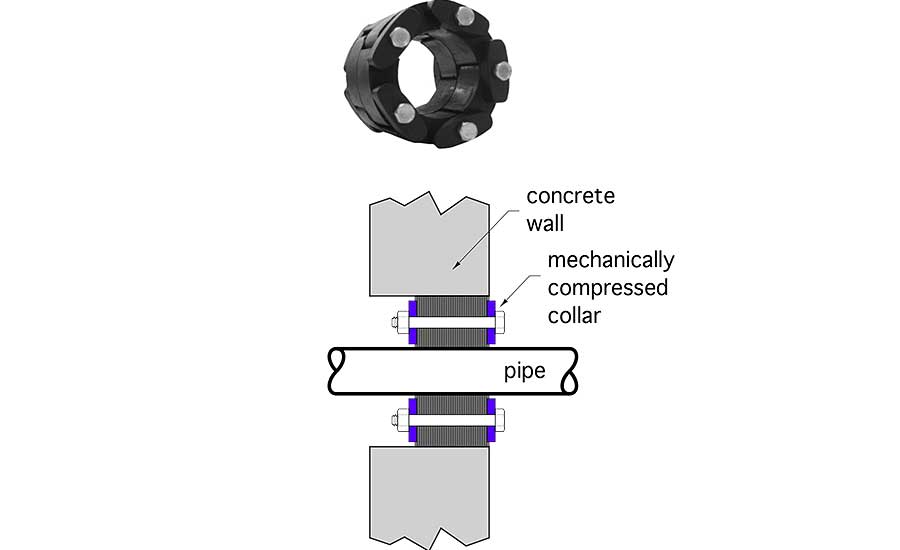 The four circuits are manifolded together in the basement mechanical room. Each circuit begins and ends with a full-port ball valve. These valves allow for individual purging, rather than simultaneous purging of the parallel loops. The flow rate required for individual loop purging is only 1/4 that required if all the loops had to be simultaneously purged. This allows a relatively small purging pump to do the job, compared to a nominal 2-HP purging pump that would be required if all four loops had to be purged simultaneously. This earth loop configuration also eliminates any need for fusion joints in the HDPE piping.

The earth loop is filled and purged through two full-port ball valves. Their placement, in combination with isolation flanges on the earth loop circulator, allows the earth loop to be flushed without passing flow (and possible debris) through the heat pump.

The earth loop subsystem has an expansion tank. This detail is sometimes omitted from “traditional” earth loop designs. The rationale is that the earth loop piping can expand and contract sufficiently to accommodate the expansion and contraction of the fluid it contains. However, the HDPE piping and fluid expand and contract at different rates, which causes significant pressure variations over the course of a year (higher pressures in winter and lower pressures in summer). The presence of an expansion tank greatly reduces these pressure fluctuations.

A combination air/dirt separator with a magnetic collar is used to reduce the dissolved air content of the earth loop, and capture any residual dirt particles not removed with the initial fill and flush. The magnetic collar allows the lower bowl of the separator to capture ferrous metal particles that could be present. In my opinion, this feature should be included in any system using circulators with ECM (e.g., permanent magnet) circulators.

Combination isolation /flushing valves are provided on the heat exchanger’s domestic water inlet and outlet. They allow that side to be isolated and flushed with a mild acid solution to remove potential scaling.

The preheated domestic water leaving the heat exchanger passes into a 30-gallon electric water heater for a temperature “top off,” if necessary. This tank also provides full DHW backup if the heat pump is down for servicing. An ASSE 1017 anti-scald valve ensures that water delivery temperature doesn’t exceed 120º.

A 12KW electric boiler and its associated circulator are piped to the buffer tank in parallel with the heat pump. That boiler and circulator operate if the tank temperature drops to 100º or less.  During normal system operation, this boiler should see minimal operation. It’s primarily a backup heat source.

Space heating is provided by a combination of panel radiators and floor heating. The panel rads and selected areas of floor heating under tile floors on the homes main level are sized to operate with an average water temperature of 110º under design load conditions. Embedded tube circuits in the basement slab are supplied through a motorized mixing valve. This allows constant circulation in combination with outdoor reset control of supply water temperature. The basement is controlled as a single zone by a dedicated thermostat.

The main floor is divided into two zones. Zone 1 handles the kitchen, dining and living room.   Zone 2 handles the bedrooms and bathrooms. Figure 4 show the layout of the heating distribution system for the home’s main floor. 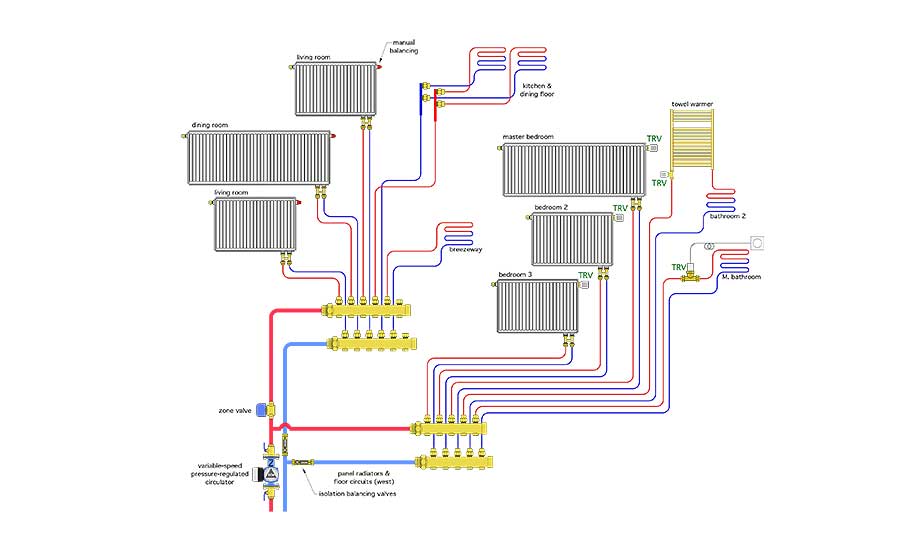 The home’s attached garage slab is also heated by embedded tubing. These circuits are supplied through a brazed-plate heat exchanger, and operate with a 30% solution of inhibited propylene glycol. This allows garage heating to be completely turned off, if desired, without risk of freezing. Because this portion of the system is isolated by the heat exchanger, it requires an expansion tank, pressure relief valve and fill/purge valves.

Thermal priorities: When high-mass and low-mass heat emitters are used in the same system there’s always a possibility for the high-mass emitters to “gobble up” heat at a high rate when coming out of a setback condition. This will temporarily depress the water temperature supplied to the low-mass emitters, possibly to the point of creating discomfort in the zones served by the low-mass emitters. In this system that possibility is all but eliminated by having the 12 KW electric boiler ready to operate as a second-stage heat input. If this boiler were not present, a control strategy that temporarily limits heat input to the high-mass emitters when the temperature in the upper portion of the buffer tank drops a few degrees below the lower setpoint is a good idea.

The flow switch for on-demand domestic water preheating is disabled during cooling mode.  Domestic water is heated by “free” heat from the heat pump’s desuperheater whenever the heat pump is operating in cooling.  Any necessary temperature “top off” is handled by the elements in the 30-gallon electric water heater.

Have it your way: There are several possible variations on this system. For example, the distribution system could be all radiant panel or, for that matter, all panel radiators. The cooling distribution subsystem could be divided into zones on either the water side or air side. The entire system could operate with an antifreeze solution to eliminate the brazed-plate heat exchanger for the garage zone. Multiple heat pumps could be used in a stage configuration for large loads. All of these configurations leverage the superior comfort of low-temperature hydronic heating.