Last month’s Renewable Heating Design column showed a piping schematic for a system with two pellet boilers and a single auxiliary boiler. A portion of that schematic is shown in Figure 1. 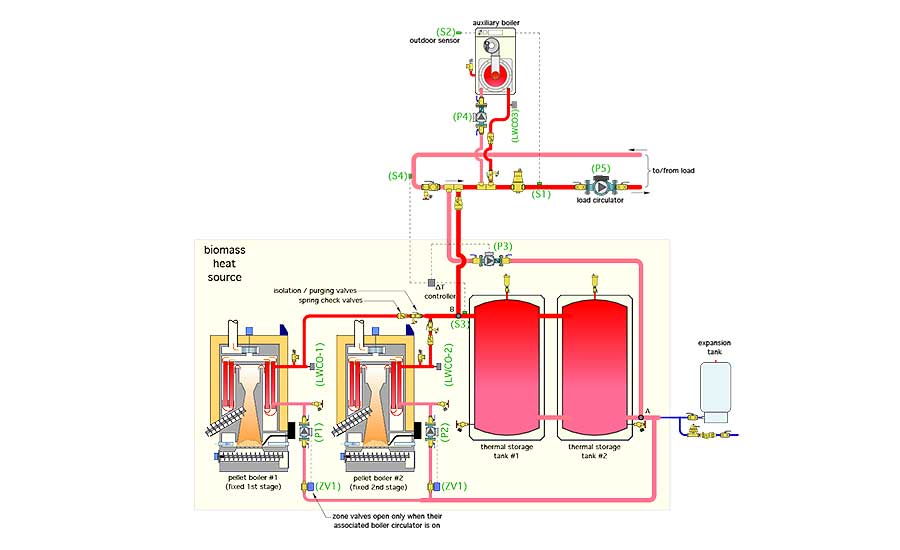 Although this control task may appear “routine,” it’s complicated by the fact that, unlike fossil fuel boilers, it’s important to keep a pellet boiler running for an extended period once it is turned on. This keeps the majority of the pellet boiler’s on-cycle at or near high steady state efficiency. It also reduces particulate emissions. One suggested criteria is to design the system so that the pellet boiler has an average run time of three hours per start.

It’s also necessary to avoid firing the pellett boiler based on calls for heat from zone thermostats. The latter can result in several calls for boiler operation per hour, which is far too frequent to achieve the desired long pellet boiler on-cycles.

This “two-sensor” control method allows the upper portion of the thermal storage tank to drop to the lowest temperature that’s still useable by the load before turning on the pellet boiler. It then keeps the boiler running until the tank is packed full of heat, as evidenced by a relatively high temperature in the lower portion of the tank. Figure 2 illustrates the concept. 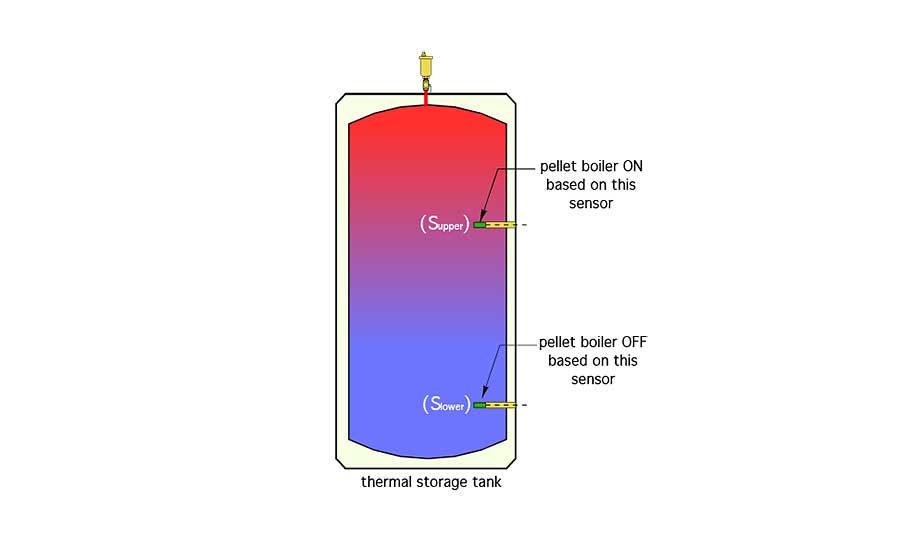 The temperature at which the upper tank sensors calls for the pellet boiler to fire can be based on a fixed setpoint temperature or outdoor reset control. The latter allows the upper tank temperature to drop to its lowest useful value for space heating before calling for the boiler. This is especially helpful in extending the temperature cycling range of the thermal storage tank when the distribution system uses high-temperature heat emitters such as finned-tube baseboard.

This concept can be extended to two pellet-fired boilers. Two “sets” of temperature sensors are used, one for each boiler as shown in Figure 3. 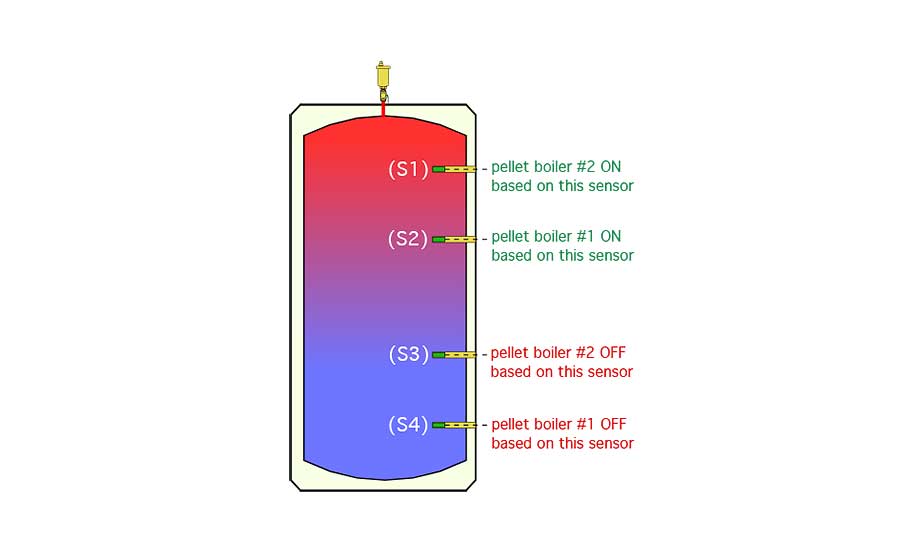 If the two pellet boilers are identical, their firing order (e.g., lead vs. lag) should be periodically switched. The objective is to provide about the same total run hours on each boiler. This can be done automatically or manually. When a building automation system is used, the boiler “rotation” typically will be programmed to occur automatically. In a smaller system without BAS controls the rotation can be done using a four-pole double-throw (4PDT) switch. The setting of this switch could be altered once or twice per heating season based on the hours of operation recorded by each boiler’s internal controller. Figure 4 shows the switching circuitry. 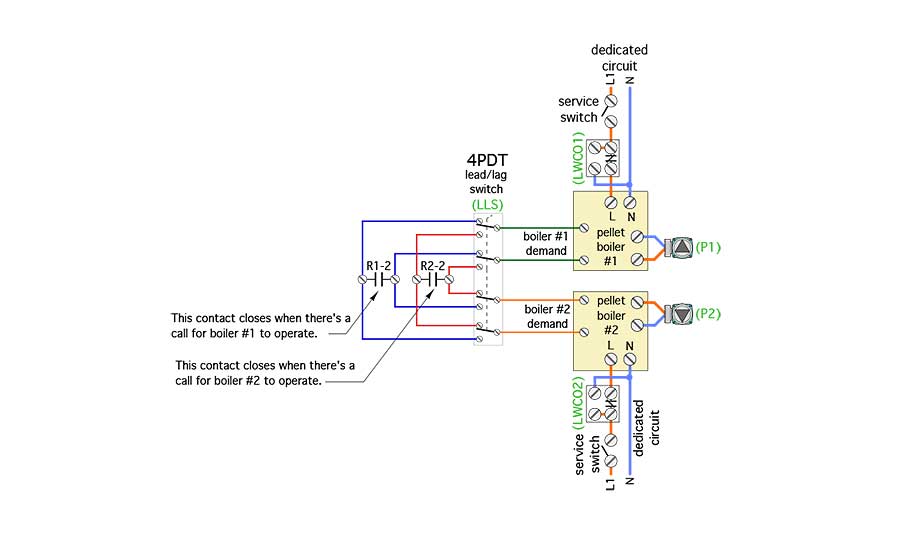 Both of these control criteria can be met using a simple differential temperature controller (or its equivalent programming in a building automation system). The DTC would compare the temperature on the return side of the distribution system (S4 in Figure 1) to that at the upper tank header (S3 in Figure 1).

A suggested control criteria based on these sensor temperatures is:

Another detail worth discussing is the two zone valves (ZV1) and (ZV2) located on the inlet pipe of each pellet boiler. These valves are wired in parallel with the boiler circulators (P1) and (P2). They open when their associated circulator is on and close at all other times. Their purpose is to prevent flow through their associated boiler when it is off.

Without these valves or equivalent means of blocking flow, the slight pressure difference developed between points A and B on diagonally opposite sides of the thermal storage tank array could be sufficient to overcome the forward-opening pressure differential of the spring-loaded check valves in each boiler circuit. The result would be undesirable flow of heated water through an unfired pellet boiler. This dissipates heat through the boiler jacket and up the chimney(s). The latter is especially wasteful since pellet boilers don’t have automatic stack dampers.