If you’re my age, you’ll remember Chubby Checker singing the Limbo song. If you’re wondering who and what that is, check out the link. I found myself thinking of that song and how low can you go when reviewing some flat panel radiator pictures.

During my many trips to ISH, the huge hydronic tradeshow held in Frankfurt, Germany, every two years, I encountered a different mindset regarding hydronic system supply water temperatures. Our counterparts across the pond were designing their hydronic systems to massage water temperatures as low as they could go. I was repeatedly told, by manufacturers and tradesfolk, that this saves energy and, therefore, money. Getting the same resulting comfort, but doing so more economically than we were, for the most part, here in the States. I adopted that mindset and forged ahead with designing my systems for the lowest LWT (leaving water temperature) possible and not just for new from-scratch installations. It turned out, there were numerous opportunities for retrofit applications and our customers reduced their previous energy consumption by a minimum of 30% to maximum of 70%.

Richard Trethewey (the mechanical contractor on PBS’ “This Old House” TV show) was a keynote speaker at a Comfortech convention and tradeshow. A longtime great friend of mine, we sat together in the front row with a group of fellow friends who were all mechanical contractors. During his speech, Richard said something that was immediately and forever etched into my brain: For every 3° F we lower the LWT, energy consumption is reduced by 1%. That certainly rang true because I had personally seen impressive energy usage reductions for our customers.

Looking for some verification, I contacted the smartest guy I know in the hydronics industry, John Siegenthaler, aka Siggy, and asked him if any empirical studies had been performed to substantiate Trethewey’s claim. Siggy was unaware of any such study. I knew that three of our retrofit hydronic makeovers had been carefully tracked by mechanical engineers regarding their energy consumption before and after while utilizing heating degree-day information for an apples-to-apples comparison. I knew how much we had lowered the LWT temperatures and while Trethewey’s 3:1 ratio was not precise, it was darn close to being spot-on.

This can even be accomplished in buildings utilizing hot water baseboard, which can be operated with LWT of 110° F. The only way to determine the required LWT on a design day is to first perform a precise heat loss calculation. I use Elite software, which is built on ACCA’s (Air Conditioning Contractors of America) Manual-J heat loss/gain program for residential and light commercial buildings. For hydronic radiant applications, I use Uponor’s design program for heating. Once I have completed the room-by-room heat loss, I then cross-reference to the heat emitters’ EDR (Equivalent Direct Radiation) rating to determine the emitters’ output in Btu/h to find the balance point where the Btu/h output meets the room’s heat loss. I use an Excel spreadsheet to illustrate each room’s required LWT from the heat source. Typically, I find the vast majority of heating systems (both hydronic and air-based) to be oversized by a wide margin. Often, building upgrades over many decades have exacerbated the excess Btu/h capacity of these systems — new windows, doors, added insulation and air sealing. Given that upwards of 40% of building energy losses are caused by ex-infiltration of air, lowering air movement through the building envelope can pay huge dividends.


I knew that three of our retrofit hydronic makeovers had been carefully tracked by mechanical engineers regarding their energy consumption before and after while utilizing heating degree-day information for an apples-to-apples comparison. I knew how much we had lowered the LWT temperatures and while Trethewey’s 3:1 ratio was not precise, it was darn close to being spot-on.


On occasion, the discomfort issues can be and installer error. Carvel Peck Foster was a local big wig with the Republican Party in my hometown York, Pennsylvania. He called asking if I would meet him at their farmhouse to look at an issue. The home had a wraparound concrete L-shaped porch that had been enclosed and incorporated as many sliding glass doors as possible. Foster told me he and his wife loved sitting there reading books while gazing across his farmland, and it was a spectacular view. “As much as we love sitting out here, our feet are freezing during cold weather in spite of cranking up the thermostat.” The issue was immediately obvious to anyone who understood the dynamics of the Slant Fin Fine Line 30 hot water baseboard. The baseboard had been installed along the common wall to the home and set up as its own zone with the thermostat also located on the common wall to the home. Whenever the zone was calling for heat and the baseboard heated up, the convection current pulled the frosty air cascading down to the floor level, from the multiple sliding glass doors, across the floor and over their feet. In between each sliding glass door set, there was an 18-inch wall space.

Runtal vertical wall panels placed between every sliding glass door set, and at both ends, more than met the design day Btu/h criteria. Easily customizable, I ordered 7-foot tall vertical wall panels with top supply/return ports. This provided the space needed to run the distribution piping exposed because of these being outside walls and set up with reverse-return piping so that each wall panel would receive equal balanced flow without the need for any circuit setter valves. The hot water baseboard was removed, and the Honeywell T87 thermostat remained in its original location. They were delighted as full comfort was delivered. So much so that the Fosters had me return to address other areas of discomfort: Mrs. Foster got cold toes when standing at her kitchen sink — Runtal horizontal radiator placed in the toe-kick recess at the base of the cabinets resolved that issue. Their whirlpool tub had a 220-volt electric radiant heater easily touched while soaking in the tub — yikes! A Runtal custom multilayer horizontal towel warmer took its place. And the top floor guest bedroom had no heat where we installed multiple Runtal horizontal wall panels. Foster was a member of a bluegrass band and they would perform on a replica steam engine train in southern York County. We were onboard one day when his band came to our passenger car, recognized me, and announced to the packed audience how great the work was that we did and to be sure to call me if anyone ever wanted their work done to perfection! 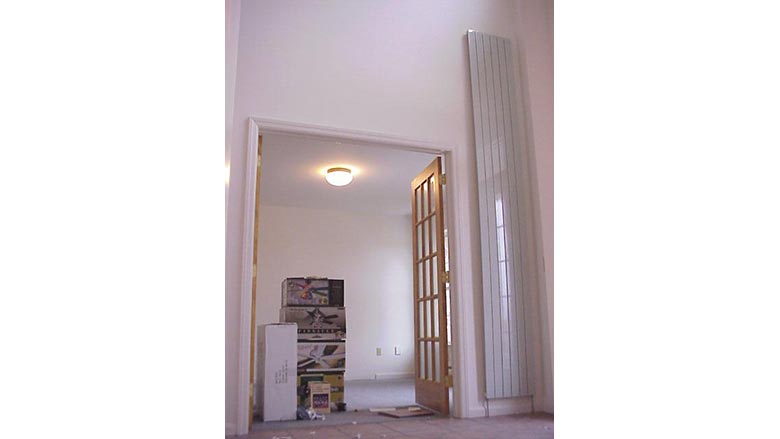 Perhaps our greatest energy conservation achievement was St. Paul’s Church in neighboring Dallastown, Pennsylvania. A sprawling campus consisting of an old sanctuary (now a social hall), classrooms, offices and a new sanctuary. The heating system was powered by a 1.3-million Btu/h steam boiler, which was older than the new additions and there was a steam-to-hot-water tube-in-shell heat exchanger for the hot water hydronic systems serving the newer additions. The new Sanctuary had TTW (through-the-wall) air conditioning units with hydronic coils for heating. Lots of ex-infiltration of air to the point where they often ended up with splits in the hydronic coils during bitter cold weather. We removed the TTW units, sealed the exterior weather-tight while leaving the decorative ironwork in place, filled the cavity with high-density insulation, plastered the wall surface to match the existing wall, painted the patched areas to match existing paint, and had a woodwork specialty firm produce matching baseboard at the floor level. The individual 220-volt power feeds were reused for 10 2-ton Fujitsu floor console inverter heat pumps. The nominal ratings at minus 5° F were a match for the revised heat loss and were put to the test in their first week when outdoor ambient air temperature dropped to minus 5° F for several nights in a row. Naturally, I was anxious to find out how well the Fujitsu units were dealing with the bitter cold, and was pleasantly surprised to discover just five out of ten were running and Sanctuary temperature at 72° F. 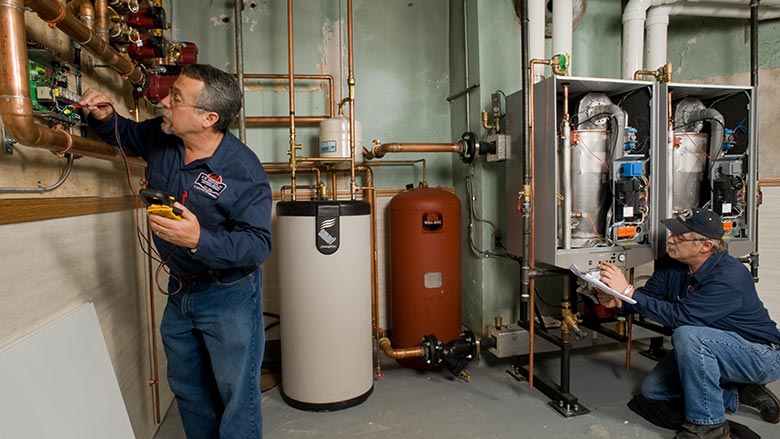 In the east and west Narthex areas, older cast iron radiators (that were all leaking between sections) were removed and Runtal vertical wall panels were installed to welcome incoming churchgoers in luxurious comfort. The challenge in both Narthex areas was the inability to run concealed thermostat wires and we were at the opposite end of the complex from the mechanical room. A simple and reliable solution was to install a Grundfos Alpha circulator set to AutoAdapt and keep it powered on. The Alpha idles along at a 5-watt power consumption until one — or more — of the thermostatic radiator valves opens. Sensing the change in pressure, the Alpha ramps up its speed as needed to meet the flow demand and automatically increases or decreases flow depending on how many of the thermostatic radiator valves are open or closed. 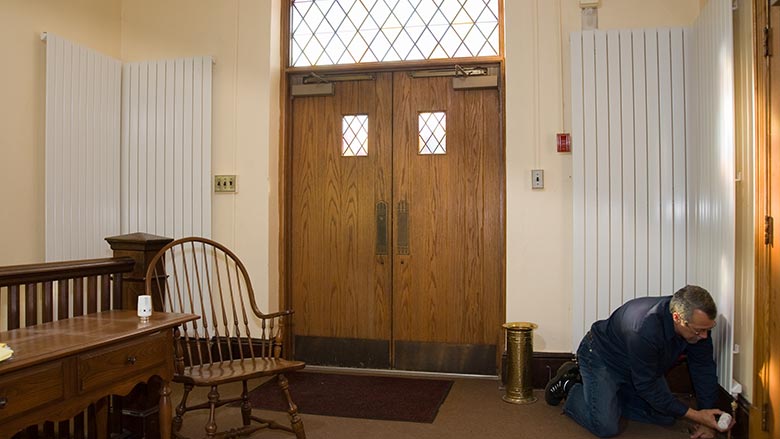 In the old Sanctuary, now Social Hall, we removed the old cast iron steam radiators — many of which were leaking — and installed Buderus flat panel radiators with thermostatic radiator valves to self-regulate heat outputs as needed and did the same for other areas where steam was converted to hot water. 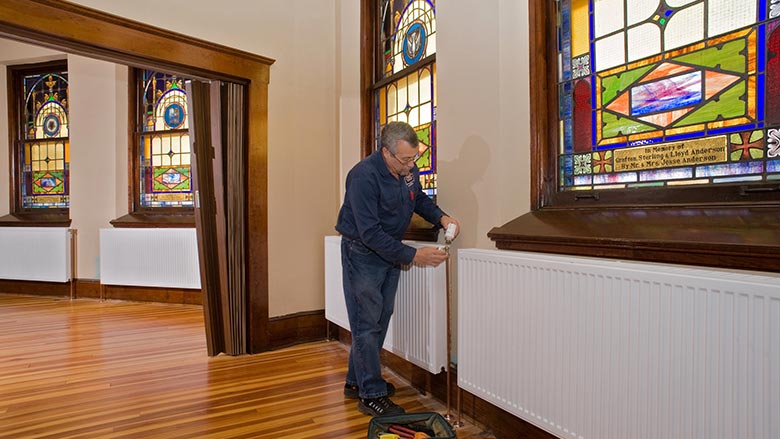 The local inspectors were a bit flummoxed by the systems, so we invested the time needed to educate them and assist with the mechanical and electrical inspections. In our area of Pennsylvania, we are permitted to perform the required electrical work to connect our mechanical systems. The twinned 399K-Btu/h modulating condensing boilers were mounted on the manufacturer’s custom hydronic rack, making for a very-nice looking finished installation.

A year later, the church informed us that both their electric and natural gas energy usage had been reduced by a bit more than 70%. The electric side was reduced because the Fujitsu inverter heat pumps located in the sanctuary, classrooms and offices use only the energy required to meet demand while varying their speed for all motors. The natural gas side reduction was the result of ditching the grossly oversized steam plant, inefficient steam-to-hot-water module, installing twinned modcons, an indirect water heater and lead/lag boiler control to ensure equal runtime for both boilers. If either boiler exceeds 30% capacity, the second boiler is staged on and both lower their speed to conserve the maximum energy possible.

Designing for ultra-low water temperatures is an absolute necessity for the growing air-to-water inverter heat pumps market that is expanding market share rapidly. Air handler hydronic coils can be oversized to allow lower LWT, ideally 120° F or less, while ensuring adequate contact time for the passing air to warm to “standard” heat pump air delivery temperatures of 105° F to 115° F.

Change is the only constant!