One of the best things about hydronic heating systems is that it’s easy to integrate some method of domestic water heating. This combination has been used for decades in systems where a boiler was the sole heat source. It’s also possible when a heat pump serves as the heat source.

This month we’ll look at a unique system that was built to provide space heating, cooling and domestic hot water for a low-energy use house while leveraging the operating characteristics of a water-to-water geothermal heat pump.

The space heating portion of the system has seven individual zones with a combined design load of only 29,700 Btu/h. Some of these zones are single-panel radiators with design outputs in the range of 1,400 Btu/h. To avoid short cycling the heat pump, we planned the system around a 119-gallon buffer tank. A portion of the system’s piping is shown in Figure 1. 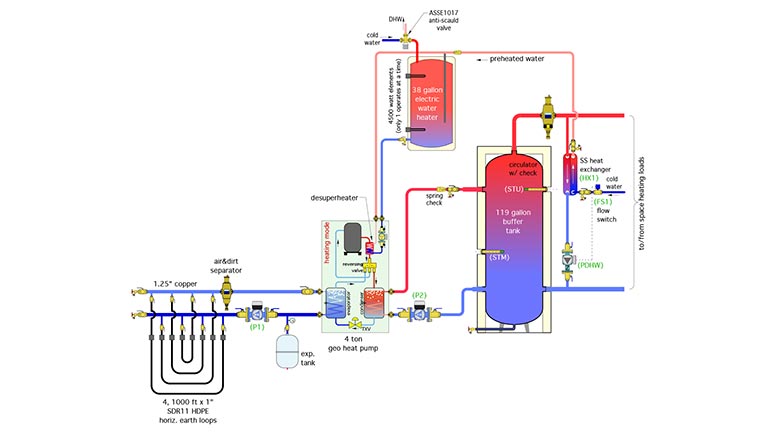 A typical desuperheater transfers about 10% of the available heat in the refrigerant gas leaving the compressor to the domestic water stream. The remaining heat is transferred to the system water within the heat pump’s condenser.

In cooling mode, heat removed from the refrigerant by the desuperheater is heat that doesn’t have to be dissipated from the earth loop. This is beneficial in two respects: First, it’s “free” heat for domestic water, and second, lower ground loop temperatures improve the Energy Efficiency Ratio (EER) of the heat pump, lowering its operating cost.

In heating mode, the energy transferred to domestic water by the desuperheater offsets what would otherwise be required from the electric resistance heating element(s) in the water heater. The COP associated with heat from the desuperheater might be in the range of 3.0 to 4.0. The COP of electric resistance heating is 1.0. This allows a portion of the domestic water heating load to occur using a fraction of the electrical energy required by a standard electric water heater. Furthermore, the majority of this heat is coming from the earth, not being absorbed from the air inside the building, as would be true if a standalone heat pump water heater was used.

Systems with relatively large electric water heaters, relatively high DHW demands, lower temperature settings and heat pumps not grossly oversized for design heating loads will tend to allow a higher percentage of the total DHW load to be met by the desuperheater. However, short of monitoring a specific installation or setting up detailed (minute-by-minute) software simulations with assumed loads and mechanical equipment performance, it’s hard to know what that percentage is.

When the heat pump is off

One thing is for sure. When the heat pump is not running, there is no heating contribution from the desuperheater. This is where another strategy comes in.

The system shown in Figure 1 includes an external stainless steel heat exchanger, DHW flow switch and circulator arranged into what I call an “on-demand” water heating assembly. These components can be seen on the right side of the buffer tank.

This assembly allows heat stored in the buffer tank to be added to the coldest domestic water.  This transfer occurs whenever there’s a demand for DHW of 0.7 gpm or higher. As soon as the cold water flow rate entering the heat exchanger reaches 0.7 gpm the flow switch closes its contacts. This turns on the coil of a relay, which, in turn, applies line voltage to a small circulator (labeled as PDHW in Figure 1). Heated water from the top of the storage tank is routed through the primary side of the heat exchanger and back into the lower portion of the tank.

It would also be possible to operate the circulator labeled (PDHW) in Figure 1 on a timer rather than a flow switch. For a typical household application, the circulator could come on a 6 a.m. and turn off at 10 p.m. If a 40-watt circulator was operated 16 hours per day in a location where electricity costs $0.12/kWh, the daily operating cost would only be about 8 cents.

The load reduction on the electric element in the tank or the desuperheater depends on the entering temperature of the preheated water. For example, if the heat exchanger raised cold domestic water from 50° to 95° F, and the final desired water temperature leaving the tank was 120° F, the heat exchanger would have imparted (95-50)/(120-50) = 0.64, or 64% of the total energy required to heat DHW. It would be possible to increase this percentage by increasing the water temperature in the buffer tank. However, the warmer the buffer tank temperature, the lower the heat pump’s COP. Again, the “optimal” compromise between DHW preheating fraction and heat pump COP is hard to determine short of detailed computer simulation.

This on-demand domestic water preheating assembly could be used on hydronic heat pump systems where no desuperheater is present. One example is an air-to-water heat pump. It could also be used in combination with other renewable heat sources with associated thermal storage tanks. Examples include solar thermal collectors, cordwood gasification boilers and pellet boilers.

The “backup” heat source in this system is a 4,500-Watt electric element in the 38-gallon water heater. That tank is rated to provide a first-hour DHW delivery of 54 gallons per hour, and a recovery of 27 gallons per hour assuming a 50° to 120° F temperature rise, and without any preheating effect. This is sufficient to assume the full domestic water heating load if the heat pump is off awaiting servicing.

Domestic water heating takes advantage of the higher efficiency of contemporary heat sources operating at lower temperatures. If you’re working with hydronic heat pumps for space heating and cooling, and the building needs domestic hot water, you should leverage this opportunity.