Part one of a new series on modern hydronics.

My task is to review the proposed systems for technical details and flag possible issues for clarification or redesign before thousands of dollars of hardware gets installed incorrectly.

One trend I’ve noticed is designers who have little — if any — experience with pellet boilers treat them as simply a “box” that burns pellets and makes hot water. They want to set that new “box” next to an existing oil-fired or propane-fired boiler, and just “cut it into” the existing distribution system.

Although this sounds simple, imagine if the same logic were applied to installing a Ferrari racing engine in a 1960s vintage pick-up truck. You probably wouldn’t expect that combination to win the next Formula 1 race. In the same manner, the performance of a modern pellet-fired boiler can be severely hindered if it’s paired to a system that was never designed for such an “engine.”

I’m not suggesting that all systems using pellet-fired boilers need to use all these details. Still, many of these systems could be improved using even one these strategies. Why not take opportunity to deliver superior comfort, peak thermal efficiency, low emissions and long system life instead of just installing a box that burns pellets and makes hot water? Think system, not just boiler.

I want to demonstrate this by presenting one way to modify an existing system to work with a pellet-fired boiler.

The existing system is in an old farmhouse in rural upstate New York. It consists of an oil-fired, cast-iron boiler serving two zones of fin-tube baseboard. The cast-iron boiler was replaced about 10 years ago and appears to be in good shape, with plenty of remaining service life. Despite that fact that insulation has been added to the house, the owner stresses that there are still several “cold spots,” including the kitchen floor, two bedrooms at the end of the series circuit, and a bathroom. 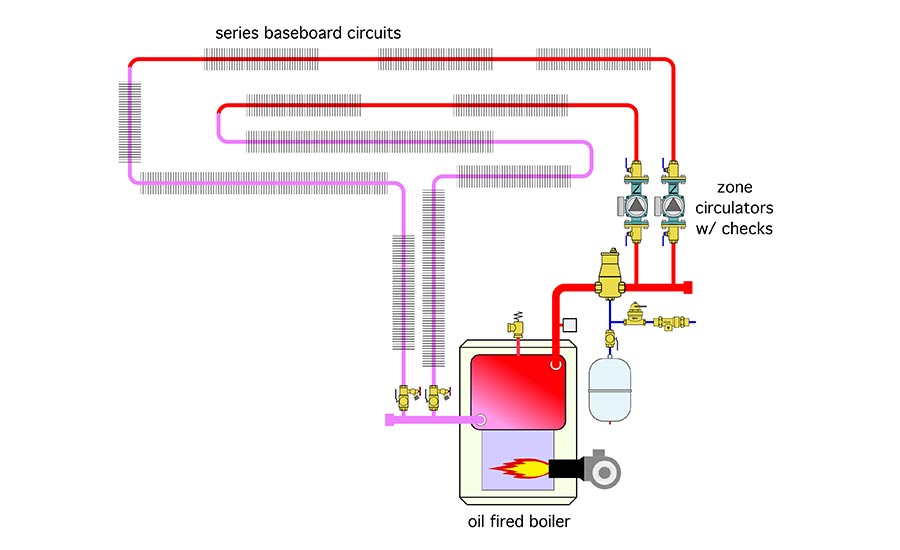 The pellet boiler and its associated thermal storage tank, which will be integrated into the system, can be thought of as one subassembly, as shown in Figure 2. 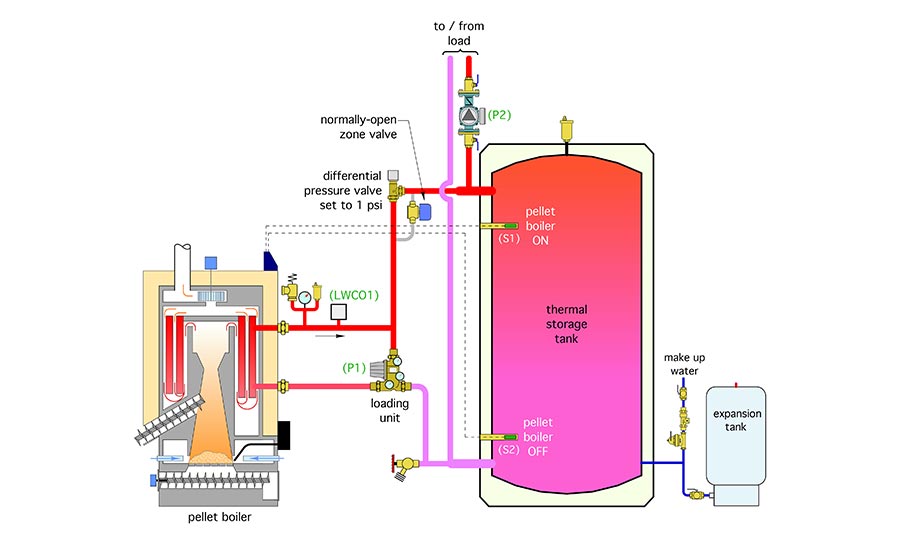 One of the key components in this subassembly is the “loading unit.” It provides flow between the pellet boiler and thermal storage tank. It also contains a high flow capacity thermostatic mixing valve, and a simple swing check mechanism. The purpose of the thermostatic mixing valve is to prevent sustained flue gas condensation within the boiler. It does this by recirculating water leaving the boiler back into the boiler until that inlet temperature reaches about 130° F. At that point, the thermostatic valve acts like a “thermal clutch” to gradually allow hot water flow to the thermal storage tank and cooler water into the cool port of the loading unit. The swing check mechanism allows thermosiphon flow between the boiler and thermal storage tank should a power outage occur while pellets are burning in the boiler. This provides a “graceful” way to dissipate residual heat from the pellet boiler during such an outage without causing the pressure relief valve to open.

The new subassembly also includes a larger expansion tank to accommodate the added volume of the thermal storage tank.

A differential pressure valve, set for an opening pressure of 1 to 1.5 psi is installed between the pellet boiler and thermal storage tank. It serves two purposes: First, preventing flow returning from the load from passing through the pellet boiler when it and the loading unit circulator are off. And secondly, preventing reverse thermosiphoning from the thermal storage tank through the cooler piping connected to it. A normally open zone valve provides a bypass around this valve in the event of a power failure, and thus enables forward thermosiphon flow between the boiler and thermal storage tank.

One of the simplest approaches to adding heat emitters to a system to eliminate “cold spots” is to create one or more homerun distribution systems leading to panel radiators, each equipped with a thermostatic radiator valve (TRV). Figure 3 shows how the original two-zone system could be modified to include two manifold stations for this purpose. 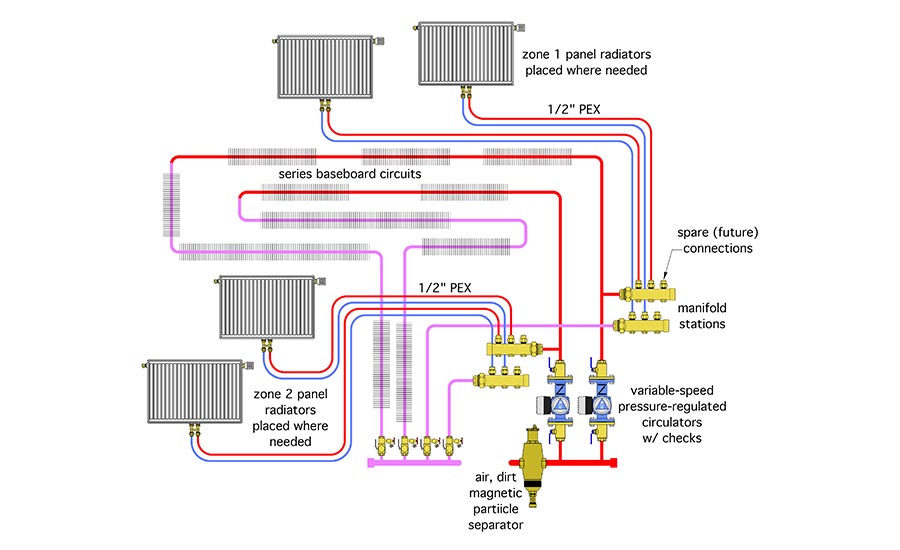 The original two zone circulators have been replaced by a two variable speed ECM circulators.  Each circulator is set to constant differential pressure mode at a value that can sustain an adequate flow rate through the baseboard circuits. A manifold station has be piped in parallel with each existing baseboard circuit. The manifold stations shown allow for two homerun circuits each, with provisions of at least one additional future circuit. I always recommend that manifolds for homerun distribution systems have at least one extra connection. It’s a lot easier than replacing the manifold station or rigging up some messy workaround if another circuit needs to be added in the future. The number of ports on the manifold stations could certainly be increased to accommodate more radiators, or perhaps more ambitious expansion of the system.

When a zone thermostat calls for heat, its associated ECM circulator turns on. Flow passes through the original baseboard piping, as well as any homerun circuit with a partially open or fully open TRV. The additional surface area provided by the panel radiators increases the heat output of each zone.  The TRVs on each radiator help “steer” that heat output where it’s needed. They also protect their respective areas for overheating based on the knob setting of each TRV. The new circulators automatically adjust speed as the TRVs adjust flow through the panel radiators.

If necessary, the inline valve within the purging valve of a baseboard circuit can be slightly closed to change the flow proportions between the original circuit and the new manifold station. The valves integrated into the manifold stations and/or the valves built into the panel radiators can also be used for balancing.

Putting It All Together:

Figure 4 shows a full schematic for the system. 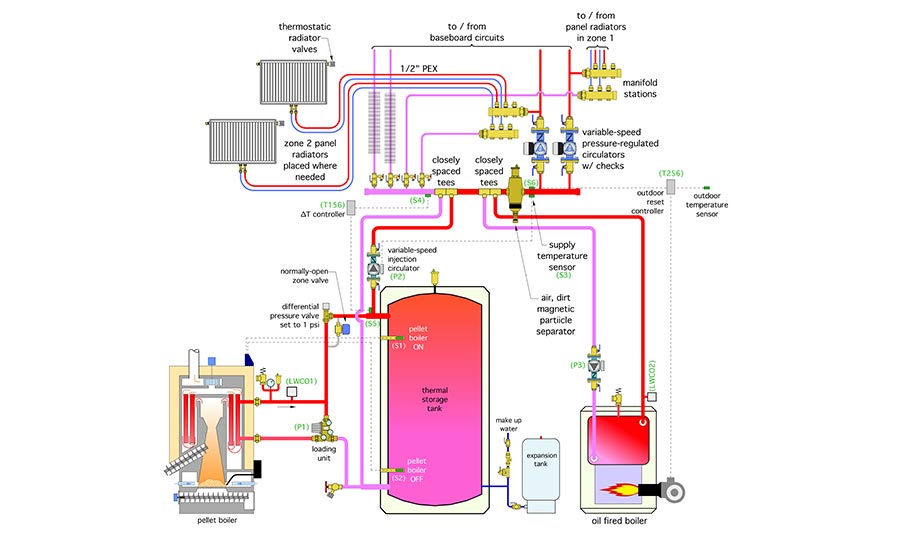 When a zone thermostat calls, heat from the pellet boiler or the thermal storage tank is “shuttled” into the distribution system by a variable speed injection circulator (P2). The control objective is to maintain some target supply water temperature at sensor S3 based on outdoor reset control. If that temperature cannot be maintained, the existing (now auxiliary) boiler operates along with its associated circulator (P3).

By connecting the pellet boiler subassembly upstream of the auxiliary boiler, the thermal storage tank can be “drained” to a temperature where it can no longer contribute heat to the distribution system.

It’s important to ensure that heat supplied by the auxiliary boiler doesn’t end up in the thermal storage tank. I’ll show you a simple way to do that in next month’s column.