Behind the scenes: Historic auditorium gets cooling system replacement 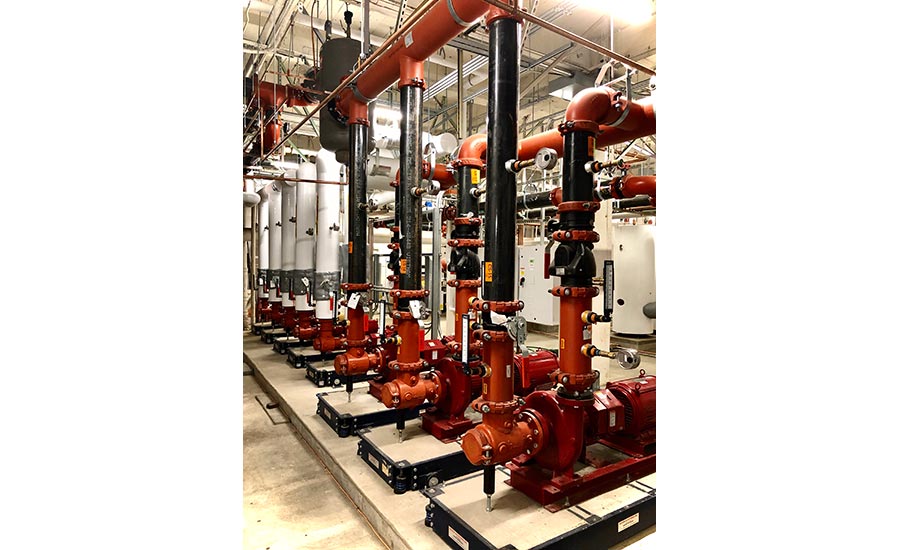 Hydro-Temp Mechanical (HTM) partnered with Victaulic, a producer of mechanical pipe joining solutions, to design and install a new piping system without disrupting the day-to-day operations of the Keller Auditorium. 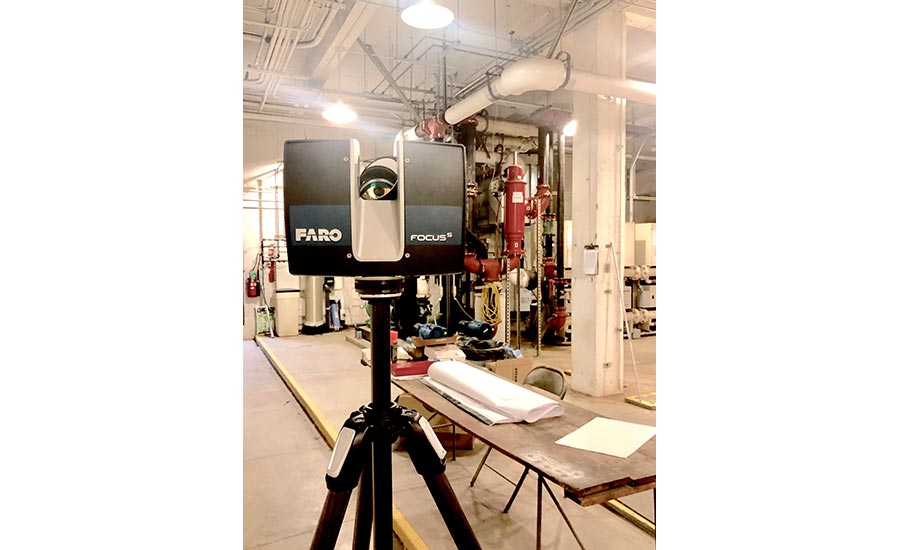 Victaulic’s Virtual Design and Construction (VDC) team used a FARO 3D scanner to map the basement and quickly compile measurements of the room and the existing piping network, all in one day.

From plays to operas, and from the Oregon Ballet to the Portland Symphony, the Keller Auditorium in downtown Portland, Oregon, has been entertaining audiences for over 100 years. So when it came time to replace the chilled and condenser water piping systems in this local landmark, the show had to go on.

Local contractor Hydro-Temp Mechanical (HTM) was tasked with renovating the historical building’s basement-level mechanical room in just four short months. Faced with limited access to the basement and extreme spatial constraints, HTM knew the room needed a complete re-imagination to determine how the area could be best utilized. So they partnered with Victaulic, a producer of mechanical pipe joining solutions, to design and install a new piping system that wouldn’t disrupt the day-to-day operations of the auditorium.

Envisioning a solution for a tight space

Before construction could begin, it was important for HTM to understand how they would maximize the small space. To accomplish this, they leveraged Victaulic’s Virtual Design and Construction (VDC) team, who used a FARO 3D scanner to assess the basement and quickly compile measurements of the room and the existing piping network, all in one day.

Victaulic’s VDC team then used the 3D scan to create a Revit model for the redesign, and the contractor used a Trimble Total Station, an instrument that allows contractors to accurately lay out a building using discrete points, to identify the hanger locations. The Victaulic team also considered the location of the existing electrical panels in citing the buffer tanks and left room for the building owner’s future plans to add stairs for a water treatment project. 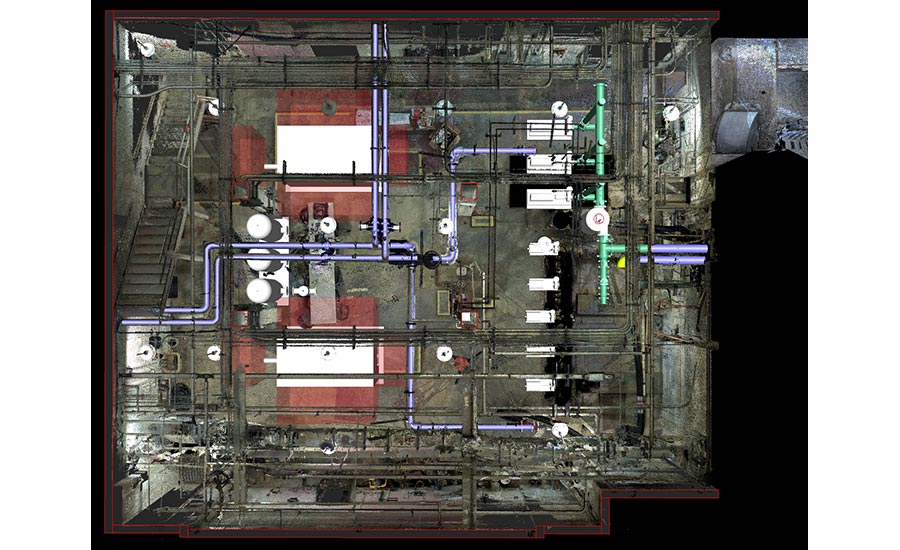 Victaulic’s VDC team used the 3D scan to create a Revit model for the redesign, and the contractor used a Trimble Total Station, an instrument that allows contractors to accurately lay out a building using discrete points, to identify the hanger locations.


“Collaborating with Victaulic was the right choice for this project,” says Jared Carkin, vice president of preconstruction at HTM. “Victaulic’s team was proficient with their hardware and software, knew what data needed to be collected, and made positive use of all parties’ time.”

“The customer really leveraged the technology by jumping in to propose layout changes,” says Justin Conley, piping coordinator at Victaulic. “It was really good communication and collaboration, and when he proposed the design changes to me, I sketched it up and created a PDF with the piping and other components. It really cleaned up the layout a lot in that space.”

Once the design was reviewed and agreed upon through the Revizto software platform, the contractor and Victaulic coordinated the simultaneous prefabrication of their materials, hangers and pipe spools. 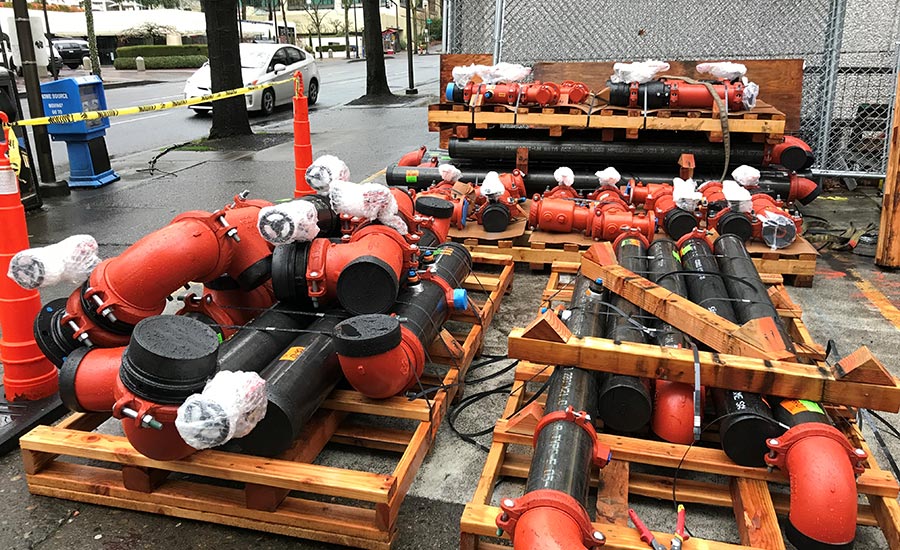 Keeping the project’s spatial constraints and lack of laydown space in mind, Victaulic arranged for bagged and tagged pipe spools to be delivered to the jobsite in the order they were needed.

The next challenge was finding a way to get all the materials into the mechanical room. Since the freight elevator and a narrow set of stairs weren’t much help, HTM decided to cut a hole in the street to allow materials to be lowered directly into the basement.

Keeping the project’s spatial constraints and lack of laydown space in mind, Victaulic arranged for bagged and tagged pipe spools to be delivered to the jobsite in the order they were needed. This way, the fabricated spools could be immediately moved to the basement and installed.

The spools included 8-inch condenser water and 8- and 6-inch chilled water carbon steel pipe connected to Victaulic grooved end couplings and fittings. The pipe was banded in pairs for the installation process; installing one was too time-intensive, but three was unwieldly. The project also utilized Victaulic vibration isolation pump drops, outlet fittings and strainers.

“The design technology and our approach eased each step of the way,” says Jake Freshour, territory sales manager at Victaulic. “As the Victaulic fabricated spools arrived onsite and were lowered into the mechanical room, HTM ensured all hangers were in place so that installation could begin immediately.”

From the beginning, it was clear to the contractor that welding the chilled and condenser water piping systems was not a viable option due to the restrictions posed by existing building. The confined space of the mechanical room and the ongoing use of the theater upstairs for performances and rehearsals required a particular pipe joining solution that could be installed with minimal disruptions.

Victaulic’s grooved mechanical joining system was the clear choice. Joints could be made with hand tools and without fumes or a hot works permit. The added benefits of speed and efficiency of installation were also major selling points, as the teams had to be flexible and work around the theatre schedule.

Victaulic’s solutions also include visually inspectable parts, which allowed the contractor to verify proper installation as the system came together, enabling work to proceed safely and resulting in a reliable and robust system.

Victaulic’s grooved mechanical joining system was the clear choice. Joints could be made with hand tools and without fumes or a hot works permit.
A standing ovation

From laydown to installation, the new cooling system in the mechanical room was completed in one week.

Although the project was relatively small, it was highly complex. HTM and Victaulic worked together seamlessly to finish the job on a compressed schedule by using state-of-the-art technology throughout the entire project.

“There’s a lot of success stories within this project, but having the VDC team use the FARO 3D scanner and other technologies cannot be overstated,” Freshour says. “That visual component made it easy to discuss the project challenges with the contractor even when they were in different work locations.”

This collaboration and the cost-effective fabrication process reinforced the contractor’s confidence the project would be completed on schedule, on budget and on time.

“Extensive coordination with Victaulic and the engineers of record resulted in a significant re-design of the mechanical room’s layout that could not have been achieved as efficiently without having scanned and modeled the existing space,” Carkin says. “The end result is a highly serviceable, clean and functional space for the building owners and their staff.”

Kurt Gobreski is vice president of product development for Victualic.