When our local water company started adding Watts No. 7 dual-check backflow preventers to all water services, we soon discovered water heaters were failing at a rapid pace, with gas fired models exhibiting telltale signs where the cold/hot water lines skewed off making them look like a bow-legged cowboy! Center flue tubes were collapsed, causing the by-products of combustion to spill out the access doors and, in many cases, melting the plastic temperature adjustment knobs. Lots of crazy remedies appeared — seemingly overnight —at our local supply houses, which included:

Who knew I was about to meet up with Boyle’s Law! Way back in the 1600s, Robert Boyle had studied the relationship between pressure and volume. Boyle’s study determined that P (pressure) x V (volume) derived a constant and the constant did not change as P and V were modified. P1 x V1 = C therefore P2 x V2 = C. That got me thinking about how to properly size a TXT for our residential water heaters to ensure no more callbacks. I no longer trusted the paperwork provided by the TXT manufacturers, and set out to build a test where the results could be documented.

With 2-gallon and 4.5-gallon TXTs, I set up a water tank and connected the expansion tanks one at a time and used a small portable air compressor to test the TXT with its 40 psi air charge (DOT regulations limit shipping TXT to 40 psi, and although the literature instructs the installer to adjust the air charge in the field to match the home’s static water pressure, very few contractors did so. This created a need to determine actual air volume for a TXT with a 40 psi air charge when installed on a system with no air charge adjustment, as it would become the actual jump-off point. The constant would therefore be P40 x V2 (gallons) = C80. Added to a 70 psi potable water system rendered P70 x V? = C80 V2 now equals just 1.14 gallons of air to accept thermal expansion. Let’s consider that 75-gallon electric water heater callback.

My search for a thermal expansion chart was found at Wessels. Locate the cold-water temperature, then final temperature and where they intersect, and you have the multiplier for determining volume of the thermal expansion. Two hitches in that giddy-up: You need to use design conditions and almost everywhere in the USA, that’s 40° F during the coldest weather because water lines are buried at different depths based upon your geographic location; and water heaters, in theory, are set at the factory for a maximum of 120° for better protection against thermal scalding. We can discuss that issue in a later column because it is a fallacy to claim 120° is a safe hot water temperature, not just with respect to scalds, but also because of bacterial amplification issues. Add to this that regulations governing residential water heaters 75,000 Btu/h or less recognize the phenomenon of thermal stacking, which occurs in hot water tanks. In fact, the water heater can still be compliant with regulations where the upper tank can be at 150°! Granted, the entire tank will not be 150°, but if we are to design for worst-case scenario, some elevation of water temperature above 120° needs to be considered, so I chose 140°. Let’s be honest, water heater thermostats are often changed when folks start running out of hot water, so we need some sort of cushion for that eventuality. 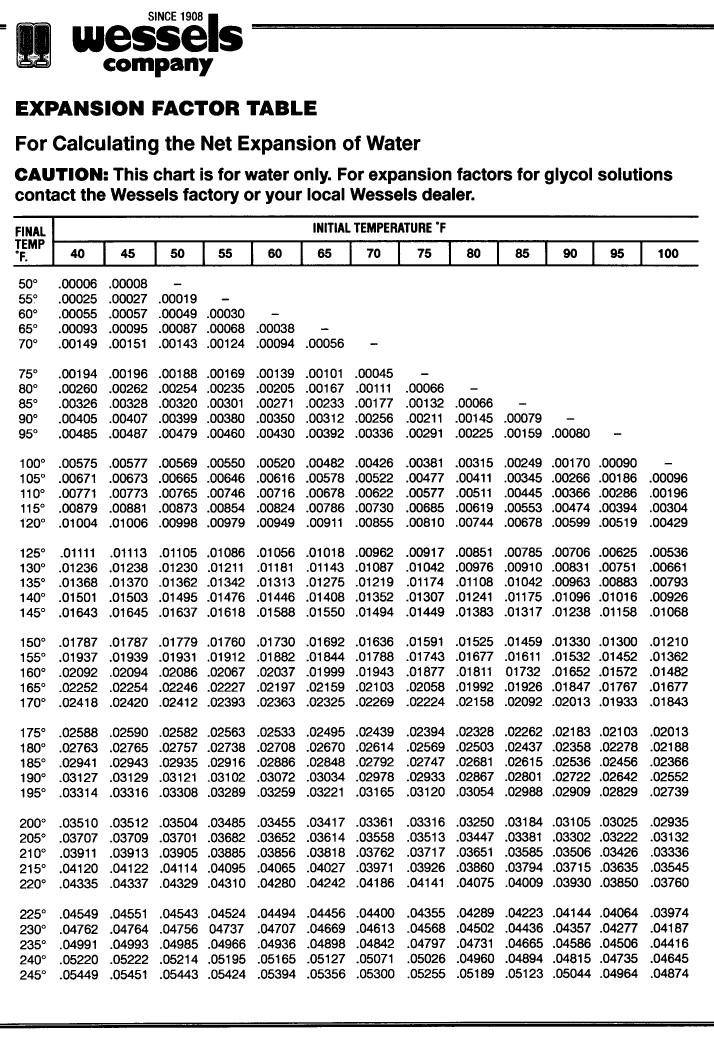 As we can see from the Wessels chart, where 40° and 140° meet, the expansion multiplier is .01501. Therefore, our 75-gallon water heater will produce 1.126-gallons of thermal expansion under my design conditions. Going back to our P2 x V2 exercise, we can easily understand why failing to recharge the 2-gallon tank will not work because thermal expansion now exceeds V2 capacity. But say we did inflate the airside to match the 70 psi water pressure as I did for our customer. P70 x V2 = C140. We know V2 now has to accept 1.126-gallons of expanded water, resulting in V2 now becoming .874 in volume. P2 therefore must be 160.2 psi and why our customer’s T&P valve was leaking at times. Clearly the manufacturers’ literature was wrong! (Over time, the manufacturers did revise their charts to better reflect real world conditions).

I did the same exercise using a 4.5-gallon TXT — without changing the 40 psi, the air charge will result in a constant of 180. Installing the TXT in a 70 psi potable water system reduces the air volume to 2.57-gallons. Introducing 1.126 gallons of thermal expansion reveals our final pressure will be slightly more than 124 psi. By this time, I had burned up two portable air compressors! Change the TXT initial air pressure to 70 and the final pressure after acceptance of thermal expansion will be 93.4 psi -— a higher pressure than I would like to see, which can place a potable water system under considerable stress. If we add a second 4.5-gallon TXT with its air charge adjusted, the final pressure is an acceptable code compliant 80 psi. I determined thermal expansion acceptance by resting the TXT on my digital refrigerant scale and using 8.34-pounds for 1-gallon of water.

The weakest link reality show was discovering which potable water component was going to be sacrificed — usually after everyone was asleep and/or over for a holiday! The lucky ones saw a rupture in unfinished basements or knew where and how to shut off their water. Unlucky homeowners suffered thousands in water damages when the rupture occurred on upper floors. The really unlucky ones were away on vacation, and I remember one couple that returned home only to be greeted by water running out from under their side door and a basement swimming pool.

The next issue we saw in the field was failure to properly support TXTs. Incredibly, it was not unusual to find expansion tanks installed horizontally and connected using ½ inch copper with either no support or using perforated plastic hanger strap! Physics won’t be denied its destiny with gravity, and add 8.34-pounds per gallon for some dynamic stress on the side outlet for the tee. The pending flood disasters almost universally happened in the dead of night. Overnight pressures in municipal water systems spike at night due to fewer people drawing water and the additional push of added water seemed to add just enough weight in the TXT to cause separation!