John Siegenthaler: It makes a difference

In last month’s column, I presented a “template” for a system that provides space heating, cooling and domestic water heating using a cold climate air-to-water heat pump as the primary heat source, and the sole source of chilled water for cooling. That system is shown again in Figure 1. 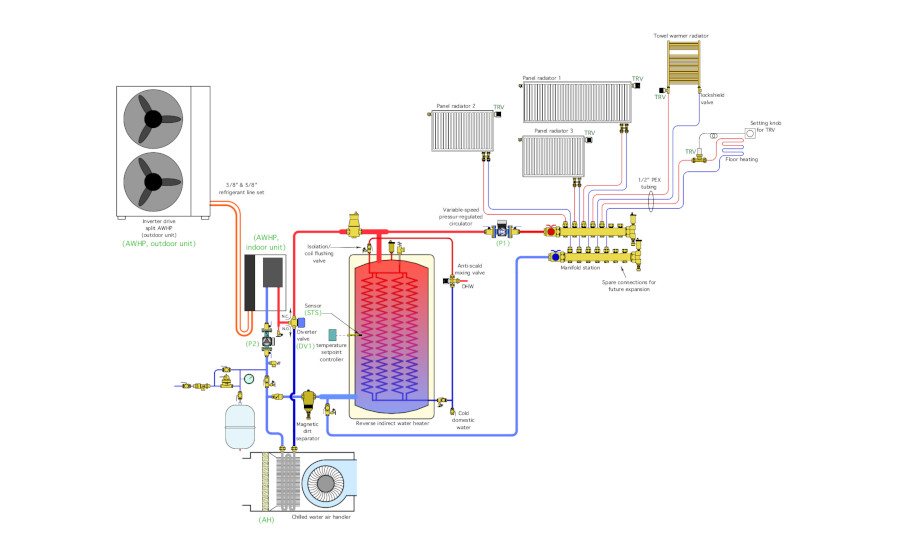 When operating in heating mode, the heat pump maintains the water in the buffer tank as some elevated temperature suitable for space heating, and at least a portion of the domestic water heating load. The reverse indirect tank provides buffering between the heat pump’s heat output rate and the variable space heating load created by five independently controlled zones of heat emitters. Domestic water is heated as it passes through the copper or stainless steel coils suspended within the buffer tank.

The combination of space heating and domestic water heating sets up a bit of a quandary. To optimize the heat pump’s coefficient of performance (COP), the water in the buffer tank should only be heated to the minimum temperature necessary to maintain comfort in the building. That’s easily accomplished using a properly set up, and relatively inexpensive outdoor reset controller. So far, so good. However, to optimize the use of heat pump energy for domestic water heating, the tank temperature should be maintained at a temperature of at least 120° F at all times. This is based on a nominal 5° temperature loss across the heat exchanger coils and assumes that DHW delivered from the tank at 115° is acceptable. Lower tank temperatures will reduce the percentage of heat supplied to domestic water from the heat pump, and thus increase the amount of heat the needed from a supplemental heat source.

Is it better to use outdoor reset to control the tank water temperature and take the “penalty” in the form of increased supplemental heating for domestic water heating, or should the heat pump maintain the tank temperature high enough to meet the DHW load 24/7, and take the “hit” of a lower seasonal COP?

That’s a complex question to answer. It involves specifics for the DHW load relative and space heating load, the COP and heating capacity performance of the heat pump and the climate the system operates in. It also involves the relative cost of installing a dual function buffer tank versus a single function buffer, and the cost of installing a means of providing supplemental heat for boosting DHW to a desired deliver temperature.

To get a quantitative assessment of these factors, I set up a spreadsheet simulation that melds much of this information together. It produced results that seem reasonable, given the relatively simple modeling methods used. I’ll share those results with you shortly. First, let’s put the “givens” out there along with the “assumptions.”

The spreadsheet simulation is based on a specific heat pump — a Spacepak SIS-060a. This is a nominal 5-ton split system air-to-water heat pump, with a variable speed compressor. It’s rated to operate at outdoor air temperatures as low as -22°. The heating capacity and COP of this heat pump, like any air-to-water heat pump, are highly dependent on operating conditions, specifically outdoor air temperature and the water temperature leaving the heat pump’s condenser. That dependency was modeled using data provided by the manufacturer to create “curve fit” equations that are easily implemented within the spreadsheet.

The building modeled was a single family home with a design heat loss of 36,000 Btu/h based on 70° inside and -10°outside temperatures. This home was equipped with a hydronic distribution system that serves a combination of panel radiators and radiant floor circuits. The heat emitters were sized for design load using 110° supply water temperature.

The system’s location was Syracuse, New York.  The simulation used long term “bin” temperature data from this location, as shown in Figure 2. 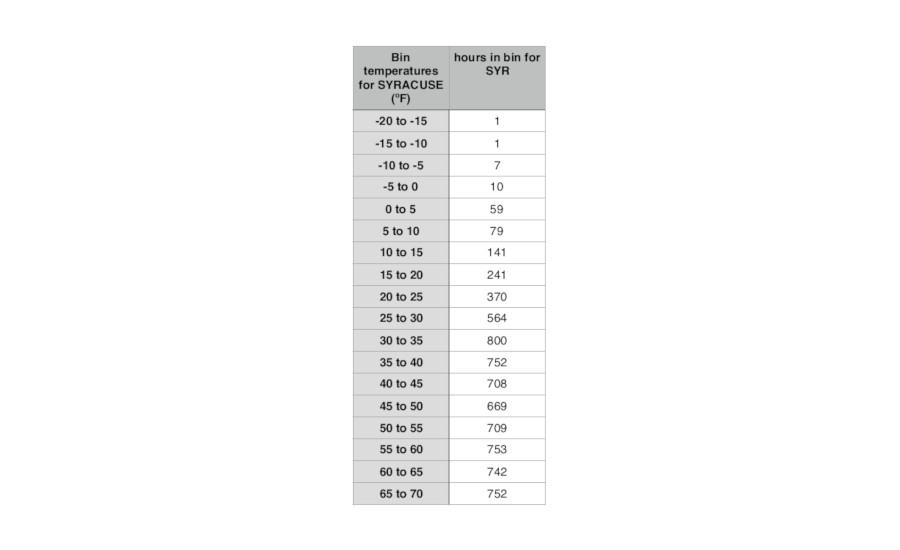 Once the spreadsheet was developed, I modeled several scenarios involving different average buffer tank temperatures. I wanted to see how these temperatures affected the seasonal average COP of the heat pump. Figure 3 shows what I found. 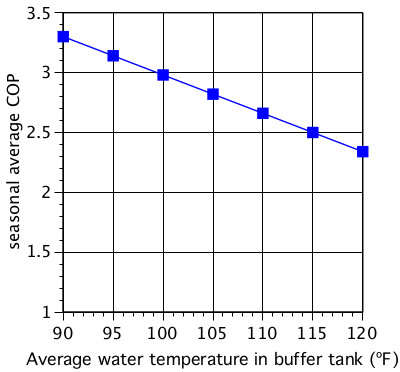 Since the heat pump’s performance improves at lower water temperatures, it makes sense to keep this temperature as low as possible. That’s easily done using an outdoor reset controller to regulate the buffer tank temperature. I modeled this strategy and found that the heat pump’s seasonal COP increased to 3.47. That, in my opinion, is excellent performance for an air-to-water heat pump in a cold climate application. It rivals the seasonal performance attainable by geothermal water-to-water heat pumps in the same application, and at a fraction of the (unsubsidized) installation cost.

But what about DHW?

I also integrated a daily domestic hot water load of 60 gallons per day heated from 50° to 120° into the spreadsheet model, and ran it for several assumed buffer tank temperatures. Any supplemental energy for domestic hot water was assumed to be provided by electric resistance heating using an electric tankless heater or a tank-type heater. The seasonal average COP was based on the total energy used for space heating plus DHW, and the total amount of electrical energy supplied to both loads. The results are shown in Figure 4. 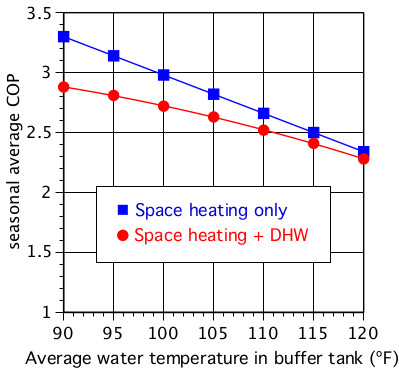 There’s a significant drop in the system’s seasonal average COP as the water temperature maintained in the buffer tank decreases. That’s predictable — the lower the tank temperature, the more electric energy required to bring DHW up to a consistent delivery temperature of 120°.

The use of full outdoor reset control of tank temperature, along with electric supplemental DHW heating, and assuming that the heat pump provides all domestic water heating during the non-space heating months of May through September, yielded an estimated annual COP of 2.82.

I suspect some or you are thinking: Why not just operate the heat pump using outdoor reset of the tank temperature, and handle the DHW load with a separate electric resistance heater (e.g., tankless or tank-type)? I modeled this scenario and found that the effective seasonal COP of the system (e.g., total energy output of the system divided by total electrical energy input) was 2.57. This reflects that 11% of the total load (space heating + DHW) would now be provided by electric resistance heating at a COP of 1.0.

In the interest of full disclosure here’s what wasn’t included in the modeling:

1.  Standby heat loss from the tank; and
2.  Energy used to defrost the heat pump.

Assuming a well-insulated tank, and intelligent defrost controls, I estimate that these effects combined would lower the performance about 5%.

From an overall performance standpoint, the combination of outdoor reset on tank temperature along with supplemental electric heating for DHW had a projected seasonal system COP of 2.85. This exceeds the estimated seasonal system COP of 2.57 based on full reset for space heating and shifting all DHW load to electric resistance heating. For this project, in this location, the annual savings associated with the higher seasonal COP be about $119/year. That has to be weighed against the cost of detailing the system to provide DHW versus using a separate water heater. On a lifecycle basis, I lean toward the higher seasonal COP attainable with the heat pump providing a significant amount of the DHW energy.

The heat pump that was modeled does not have a desuperheater. This option is available on several brands of water-to-water heat pumps used in geothermal applications. It allows the hot refrigerant gas leaving the heat pump’s compressor to cool from a superheated vapor to a saturated vapor before entering the condenser. That heat is transferred to a stream of domestic water circulating between the heat pump and a tank type water heater.

An air-to-water heat pump equipped with a desuperheater could provide much of the energy required for domestic water heating without need of heat exchanger coils in the buffer tank. That energy contribution is essentially “free” when the heat pump operates in cooling mode (since the heat would otherwise just be dissipated outside). The availability of such a unit would likely swing the design toward a single function buffer tank, the temperature of which would be regulated based on outdoor reset. A separate heater would be used to provide any small temperature boost needed for consistent DHW delivery temperature. It’s an option to look forward to as air-to-water heat pumps become more prevalent in North America.