There are many products today that can provide both hydronic heating and cooling.

Most of the modern hydronics technology used in North America for residential and light commercial buildings is for heating. Hydronic heat sources ranging from boiler to heat pumps to solar thermal collectors can be combined with many types of distribution systems and heat emitters. This allows systems to be configured for very specific comfort needs along with aesthetic preferences, budgets and fuel choices.

For decades, those interested in the versatility and superior comfort of hydronic heating have had to make decisions for cooling. Should it just be omitted? Should I install a separate forced air cooling system? Is there a way to provide cooling using a hydronic system?

Those who’ve dealt with the HVAC systems in larger commercial or industrial buildings know that the answer to that last question is yes. Chilled water cooling systems have been used in many larger buildings for decades. They leverage the vastly superior heat transport ability of water versus that of air.  Chilled water can travel long distances through insulated pipes that are very small in cross section compared to the ducting of equivalent cooling transport capacity. The chilled water then passes through a coil in an air handler, where it absorbs heat from an air stream.

That situation has changed significantly over the last two decades. Today, there are many water-to-water heat pumps and air-to-water heat pumps that can provide both heating and cooling. Most of them are electrically-operated using time-tested vapor compression refrigeration systems. A smaller portion of the available chillers use absorption cycle cooling and are fueled by natural gas or propane.  All of these devices can produce chilled water in the 45° to 50° F range typically required for both sensible and latent cooling.

There are also several types of fan-coils and small air handlers that can operate with chilled water to produce cooled and dehumidified air. Some are “console” fan-coils, such as the unit shown in Figure 1. 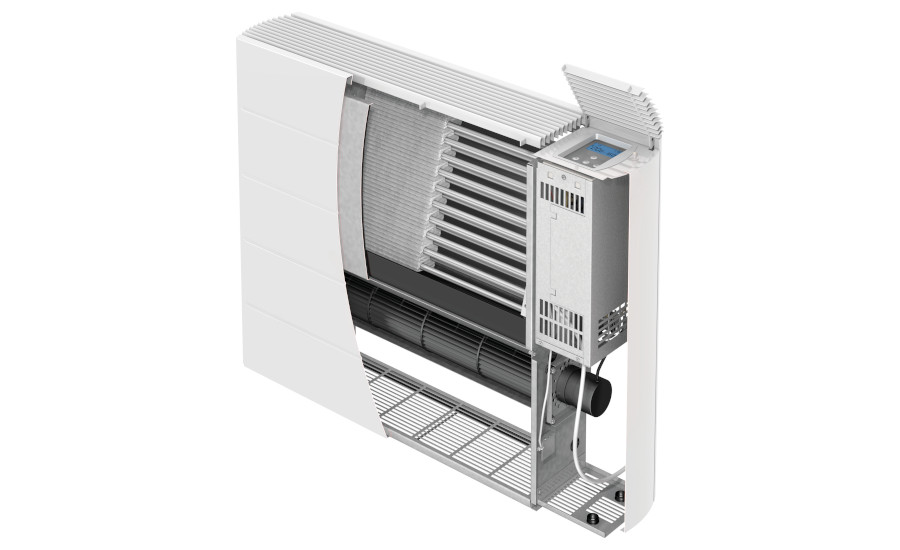 Console fan-coils are mounted low on walls, and are typically sized on a room-by-room basis.  They have a fan that blows air across a coil. As the warm humid air passes through the coil, it is cooled and dehumidified. The water removed from the incoming air stream condenses on the coil and eventually drips off it. It is essential that any console fan coil used with chilled water is equipped with condensate drip pan. Not all console fan-coils are so equipped. The drip pan must be connected to a condensate drain pipe. Codes vary on where the condensate drain pipe can go. Some allow it to be connected to the building’s DVW piping. Others may specifically prohibit this.

I prefer to keep condensate drains separated from other draining systems. Terminating them just above a basement floor drain is one option. Running them outside the building, such as through a soffit, is another. Even small console fan coils can produce several gallons of condensate when the system is operating on a muggy day. Console fan-coils can also be used for heating when supplied with warm water.

Another type of fan-coil is often called a “high wall cassette.”  An example is shown in Figure 2. 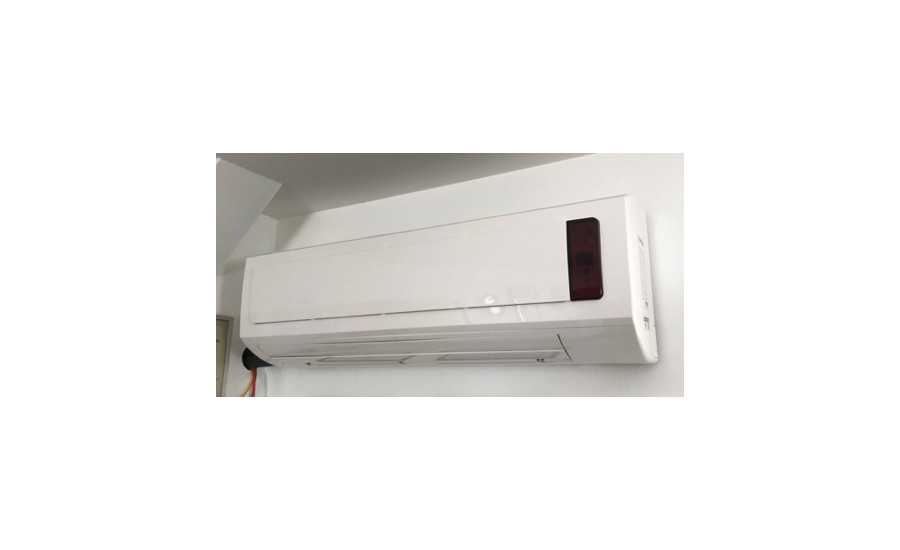 These units are very similar to the cassettes used in ductless mini-split heat pump systems.  Their internal coils are designed for water rather than refrigerant. They’re available with total cooling capacity ranging from about 6,000 to 24,000 Btu/h (0.5 to 2 tons). Most of these units have variable speed, high-efficiency fans, oscillating discharge air damper, and a handheld remote control for setting operating modes. These units can also be used for heating.

The next step up is one or more air-handlers. The idea is the same as with a fan-coil, with the difference being air delivery through ducting versus directly from the unit. Chilled water flows through a coil made of copper tubing and aluminum fins. Incoming air is pulled across this coil where it’s cooled and dehumidified on its way to the inlet of a blower. That blower then drives the conditioned air through a duct system to multiple registers or diffusers.

Most air handlers, such as the unit shown in Figure 3, are designed for installation out of sight.  Vertical air handlers can be mounted in basements, closets, under stairs or in other accessible spaces. 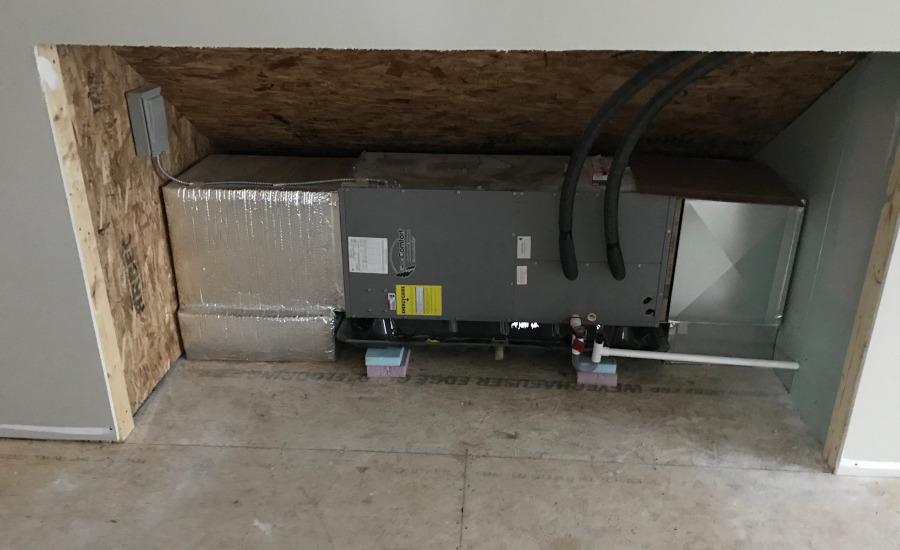 Horizontal air handlers can be hung from floor framing in a basement, mounted on platforms in attics or above door height in closets. Many small air handlers can be configured for either vertical or horizontal mounting with minimal field work. The air handlers’ location must provide accessibility for routine maintenance, such as filter changes and other service work. It’s a good practice to ensure that the entire air handler could, if ever necessary, be removed from it mounting location without sawing walls, framing, or having to take the air handler apart.

Whenever an air handler is mounted above finished surfaces, such as drywall, I prefer to set it into a secondary drain pan, such as seen under the air handler in Figure 3. This molded plastic pan serves as a catch basin for condensate if the primary condensate drip pan within the air handler ever developed a leak. The secondary drain pan usually connects to the same condensate drainage pipe as the drain pan in the air handler. In some systems, these pans are equipped with a small float switch that can be wired to stop chilled water flow and the blower if it detects a rising water level, which would infer a failure of the primary drip pan.

There are several other details that should be included in small-scale chilled water cooling systems.

With constantly increasing interest in heat pumps it’s likely that small scale chilled water cooling with see increasing use. A probable scenario is when modern hydronic heating is used in a building and supplied by one or more water-to-water or air-to-water heat pumps. In these situations the “chiller” is already in the system. It’s just a matter of equipping the distribution system for cooling.