Approaching ideals:  An ideal thermal storage tank would have almost zero heat loss. It could accept heat from one or more sources at any time, and retain it, for days or even weeks, until needed by the load.

Given present materials and technology, any tank that approached this ideal would be prohibitively expensive. Still, there are improvements that could be made to currently available pre-insulated tanks that would improve their thermal and hydraulic performance. There are also many ways to potentially pipe thermal storage tanks into systems. The optimum piping depends on the operating characteristics of the heat source, as well as those of the load.

This month I’ll describe a conceptual tank that could be made using present-day materials and manufacturing methods. We’ll also discuss several ways this tank could be piped into systems. 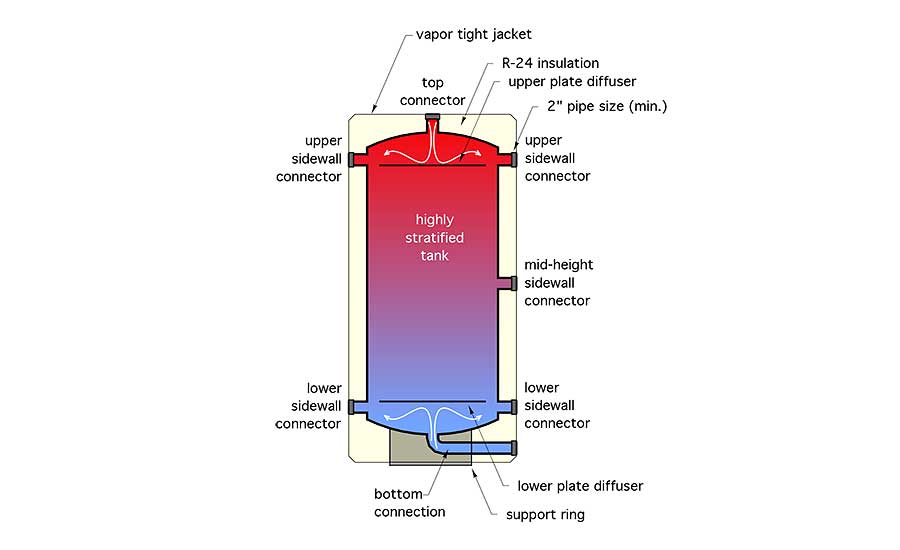 A versatile Thermos bottle:  Figure 1 shows the concept for a thermal storage tank that could be used in a variety of residential and commercial systems.

I’ve always been impressed by Thermos bottles. You can fill them with hot coffee at 6 a.m., and still pour a steeping hot cup at 6 p.m. A good thermal storage tank should have comparably low rates of heat loss (or heat gain in cooling applications). To achieve this, I’m suggesting that thermal storage tanks be encased in R-24 (ºF•hr•ft2/Btu) foam insulation capable of withstanding 200º F temperatures. That’s roughly twice the R-value of many currently available North American tanks, but on par with some European tanks. This insulation should be continuous across all surfaces of the pressure vessel. It should also provide a vapor barrier between the surrounding air and the pressure vessel, allowing the tank to store chilled water.

The tank should have generously sized upper- and lower-sidewall connections located close to the top and bottom domes, as well as at the very top and very bottom of those domes. Locating the main sidewall connections as high and low as practical helps ensure that all the water in the tank is fully “engaged” in thermal exchange. All connections would be FPT, and no smaller than 2-inch pipe size. This allows for low entering flow velocities that help preserve desirable temperature stratification within the tank. It also creates very low head loss, allowing the tank to provide hydraulic separation for multiple circulators in circuits connected to the tank.

Reducing bushings can always be used when smaller piping or sensor wells need to be fitted to the tank.

To add versatility, the tank would have internal flow diffuser plates that create a donut-shaped gap between the outside of the plate and the inner tank wall. These diffusers break up vertical flow jets caused by water entering from the top or bottom connections. Flow passing through the annular gap moves very slowly, which again helps preserve desirable temperature stratification.

Making connections: The connections shown on the tank in Figure 1 allow for many piping variations. Let’s look at some of the possibilities. 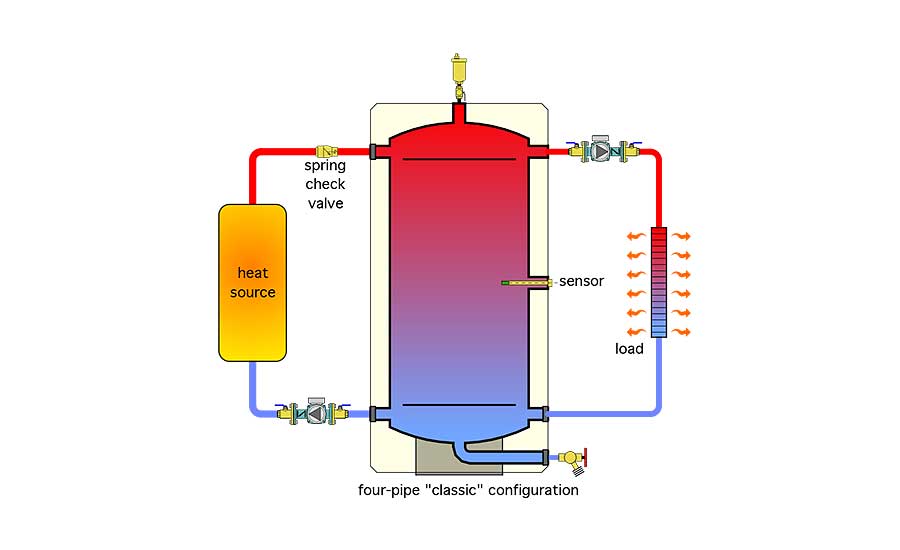 This configuration works well and has been used in a wide range of systems. It provides excellent hydraulic separation of the heat-source circulator from the load circulator. The tank’s mid-height connection is available for a temperature sensor, or the return connection for a load that operates at a low ∆T. Air can be vented from top of tank, and the bottom connection can be adapted to a drain valve.

In a four-pipe tank configuration, all heat from the heat source must pass through the tank before reaching the load. This is undesirable in situations where the tank cools well below usable water temperatures before the load calls for heat. That scenario can occur frequently during shoulder seasons when there may not be a call for heat for two or three successive days. Heat delivery to the load is delayed while the tank’s thermal mass heats back up. 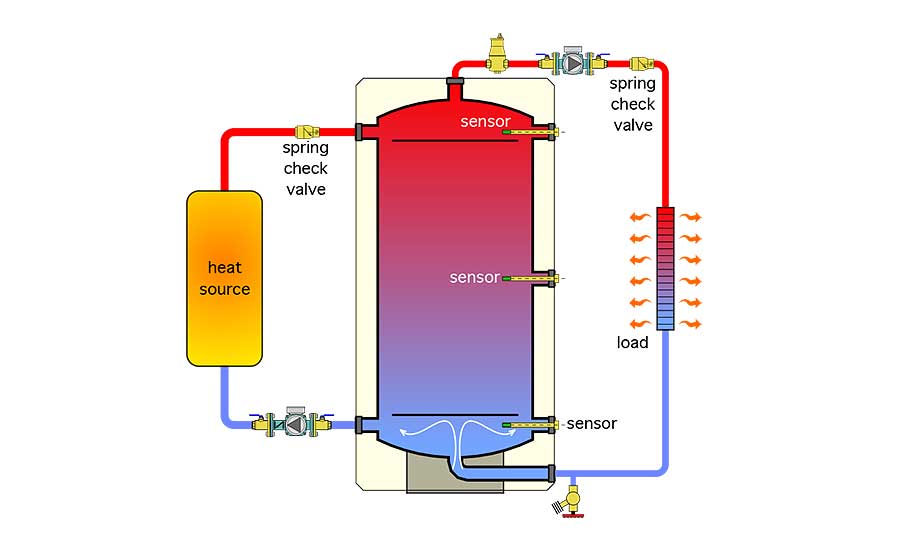 The load circuit connects to the highest and lowest ports on the tank. This ensures that the hottest water in the tank passes to the load. This layout also frees up the right side ports for additional temperature sensors, which could be used for monitoring or control functions. Those ports could also be used to connect another heat source, or for ancillary loads such as on-demand domestic water heating through a stainless steel heat exchanger. In theory, this piping “engages” the full volume of the tank in thermal exchange with the load. 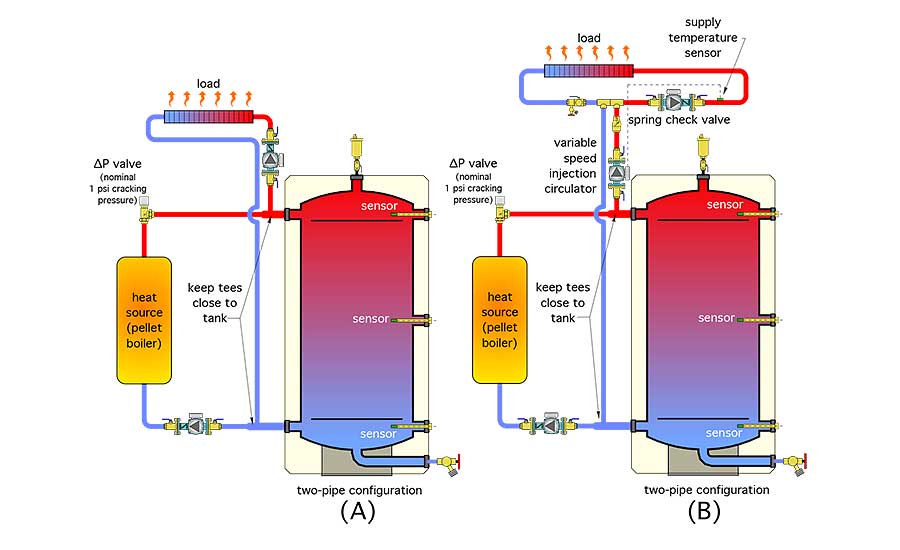 Two-pipe configuration: This piping configuration is shown as two variations in Figure 4. It places the load between the heat source and the tank.

This configuration is especially useful when the heat source is a pellet boiler that turns on and off, independently of the load, to maintain the thermal storage tank within some preset temperature range. Pellet boilers perform best when operating with long on-cycles followed by long off-cycles. In most systems thermal storage is critical in achieving this objective.

The two principal advantages of this piping configuration are:

The load could be piped directly from the tees in the tank headers as shown in Figure 4a. The risers could also be piped to a set of closely spaced tees in the distribution system, as shown in Figure 4b. The latter allows the circulator transferring heat from the tank to the load to be operated as a variable-speed injection circulator. As such, it can regulate the supply water temperature to the load based on a set-point temperature or outdoor reset control. This is a nice feature, especially when the tank undergoes wide temperature variations. Connecting to the distribution system through closely spaced tees also allows the tank to be completely isolated from the distribution system, if necessary. An example would be when the tank is too cool to contribute heat to the load, and all heat is being provided by an auxiliary boiler connected to the same distribution piping. Under such conditions, it’s important to prevent heat produced by the auxiliary boiler from entering the tank. This can be done using a differential temperature control strategy to compare the temperature at the upper tank header to the temperature of water returning from the load. Heat injection from the tank is only allowed when it is warmer than the return water temperature.

The two-pipe tank configuration also frees up several ports for installation of sensor wells, or other ancillary loads.

An important detail on two-pipe tank configurations is the use of a “∆P valve” in the heat source circuit. This valve needs to create a forward “cracking” pressure of about 1 psi. It prevents water returning from the load from migrating through the heat source when it, and its associated circulator, are off.

Next month we’ll continue the discussion by introducing the concept of a three-pipe thermal storage tank.