Knowing that I would be at NSF International headquarters in Ann Arbor, Michigan, for a Standards Committee meeting, I called my friend Dave Orton on NSF’s staff and asked for a tour of its new testing facilities for roof drains. Dave was kind enough to accommodate me by providing a great tour.

To say the least, the test rig was impressive. NSF has started testing to ASPE/IAPMO Z1034. This is the standard used to establish flow rates through a roof drain at various ponding depths.

The ASPE/IAPMO standard requires the test rig to be 12 ft. by 12 ft., with a viewing deck to observe the testing. While it doesn’t sound large, when you walk into the lab, one can only admire the behemoth. It is a huge, elevated structure with an intricate piping system that controls the flow of water onto the simulated roof.

The flow rate through the roof drain is determined by flow meters on the water inlet, not the outlet. It is easier to measure flow through the supply piping system than the drain pipe connecting to the roof drain.

The reason for the large size and intricate piping is to avoid any wave action during testing. With smaller test setups, the water entering the simulated roof created waves which obscured the test results. Since roofs are large in area, it was determined that a large test setup was necessary to determine a realistic flow rate through a roof drain.

The center section of the test rig is removable to allow the quick changeover of roof drains being tested. There are two piping arrangements that connect to the roof drain — one is a straight section of pipe, the other is an offset arrangement of pipe. Both sections of pipe drop 10 ft., with the water discharging into a collection tank.

Up close and personal look

Prior to running any test, the rig is required by the standard to be calibrated. This is where Dave and I had a long discussion. Since the NSF test rig is the first fully functioning permanent test rig, this should be the rig that the calibration standard is based on. Dave has done a tremendous amount of testing, including the calibration.

What Dave discovered is, at certain ponding levels, the flow switches from going straight down the drain to a swirling action, whereby the water starts to swirl around the drain. We have all experienced the swirling of water down the drain. It is readily visible when you fill a lavatory and pull the plug. You immediately notice the swirling flow down the drain.

When reviewing the ASPE Research Foundation report on roof drains, the same phenomenon occurred. There were some instances where the flow rate at higher ponding levels was less than the flow rate at an inch-lower ponding.

As Dave demonstrated the test rig, you could see the transition from straight flow to swirling flow as the ponding level increased. It appeared that when the water started to swirl, it stopped going down the drain. Of course, that was not happening, it was just how it appeared. With the water flowing, the ponding height immediately increased, hence the appearance that the water stopped going down the drain.

During the transition from straight flow to swirling flow, it is difficult for the labs to maintain a steady state flow. The ponding level wants to increase and decrease during this transitional flow.

When testing with a roof drain installed in the test rig, there also are periods of transitional flow. At a certain height, the water begins to swirl around the roof drain inlet. With higher ponding depths, the roof drain may transition to a more pressurized flow in the drain. Some claim the drain is going siphonic, however that is not always the case.

The end result of observing the test rig is that engineers will now have values to use for sizing a storm drainage system. The missing link for sizing always has been the amount of water that flows through the roof drain. With these values being published, more accurate sizing can be calculated by the engineer. This will reduce the possibility of a storm drainage system failure.

The first manufacturer to complete its testing on the NSF test rig was Froet Industries. The test report lists all the flow rates at various ponding heights for the drains. There are a number of models and sizes that have been tested with flow-rate results.

Other manufacturers will be following with test results for their drains. With the change in the ICC International Plumbing Code to the sizing of roof drainage systems, roof drain flow rates become an important part of the sizing protocol. The flow rates based on ponding height are necessary to properly size the storm drainage system.

NSF is providing a valuable service to the plumbing engineering profession. In the future, we may see more test rigs like the one at NSF. But for now, NSF is addressing the needs of the industry. 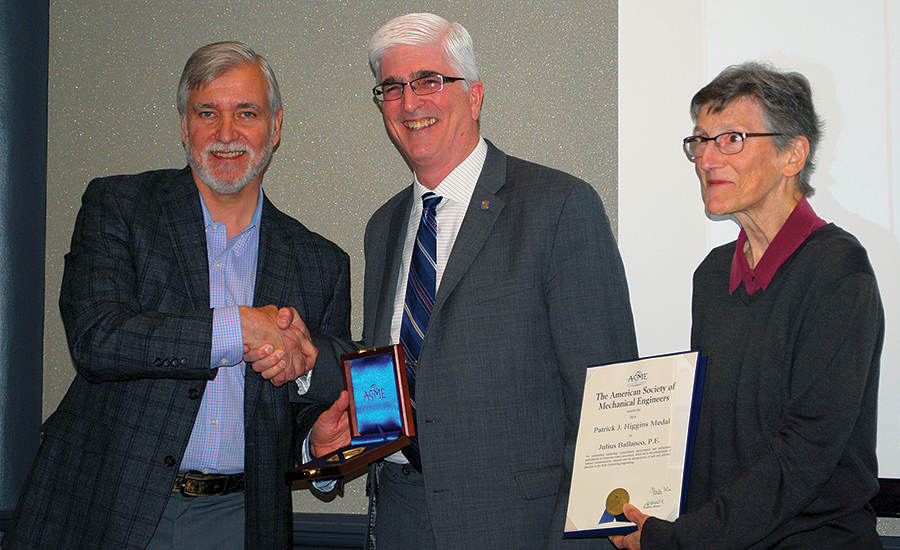 Pete DeMarco and Sally Remedios present Julius Ballanco (center) with the Patrick J. Higgins Medal for his outstanding leadership, extraordinary perseverance and enthusiastic participation on numerous water committees, which led to the enhancement of industry standardization, research and the advancement of safe and efficient practices in the field of plumbing engineering. Photo courtesy of Julius Ballanco.

Ballanco received the award for his “outstanding leadership, extraordinary perseverance and enthusiastic participation on numerous water committees, which led to the enhancement of industry standardization, research and the advancement of safe and efficient practices in the field of plumbing engineering.”

Ballanco has been active in standards writing for the ASME A112 Standards for many years — 39, to be exact — and is actively involved in developing all plumbing codes in this country. He also has served as president of ASPE and has been involved in numerous plumbing research projects.

Pete DeMarco and Sally Remedios presented Ballanco with the award at the ASME A112 Committee Meeting in San Diego.

Julius Ballanco, P.E., CPD, F-ASPE, is president of J.B. Engineering and Code Consulting, P.C. in Munster, Ind. He can be reached at by email at jbengineer@aol.com.

Julius Ballanco: Lead in drinking water continues to be a hot topic for NSF