By Joseph B. Homza
When evaluating the purchase of most types of capital equipment, the obvious factor to consider is price/performance.

Yet, an important factor that most people would agree should not be overlooked is value-added, an amenity or service – such as warranty or engineering assistance – that substantially increases the worth of the product or potential return on investment. 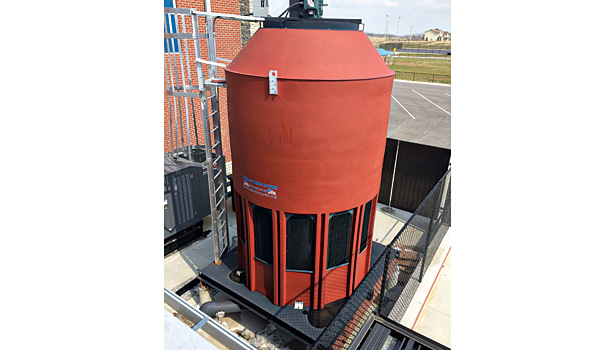 When it comes to purchasing a cooling tower (an integral component of many HVAC and heat exchanger systems) value-added often takes on more significance than usual. This is because factors such as warranty or engineering and installation assistance can be crucial to performance, and extend the service life of the equipment. Hence, value-added may significantly enhance the price/performance ratio.

This potential is realized by the latest in cooling tower technology, which features a shell composed of high-density polyethylene (HDPE) “engineered plastic,” and offers both exceptional performance and superior value-added.

One of the major problems that plagues conventional cooling tower performance is corrosion imposed by the environment (e.g., salt air or industrial pollutants) or cooling-system waters and their required chemical water treatment. With a shell of galvanized sheet metal, the conventional models are maintenance-intensive and destined to a relatively brief service life, often seven years or less.

The maintenance factor is not only expensive in terms of downtime, but also laborious to clean or coat away corroded shell panels and weld or gasket patches. Additionally, the amount of chemicals required to inhibit corrosion is costly.

Pioneered by Delta Cooling Towers and quickly gaining popularity, these advanced HDPE models are available in single and modular configurations from 10 to 2,400 cooling tons. They are in wide use for HVAC and heat-exchanger applications throughout commercial, industrial and institutional facilities.

When Joe Matthews, vice president of construction at Houston-based Vista Air Services was considering a self-contained, water-cooled HVAC system for a customer near Galveston Bay, Texas, he primarily had system efficiencies on his mind. However, since a cooling tower would be essential to the system, he also was concerned about the salt air and corrosive emissions from several surrounding chemical plants that would corrode a conventional, metal-clad cooling tower shell, making frequent maintenance and replacement necessary over the years.

Vista Air Services is a contractor involved in all aspects of HVAC systems. This particular application is a 66,000-sq.-ft. industrial turbine repair station and training facility for Mitsubishi Power Systems for its power generation turbines.

“B.R. Gonzales, a sales rep from one of our suppliers, AC Engineered Systems, suggested we go with a Delta cooling tower because AC has experienced great success with those in Florida,” Matthews explains. “Considering the potential for salt-air corrosion, we felt what was appropriate for Florida also would be suitable for a plant in the proximity of Galveston Bay.”

Matthews also figured the HDPE cooling tower would be cheaper to maintain. He was quite impressed when he learned the capital investment required also would result in a savings.

“Considering the potential operating savings, I was surprised to learn the initial purchase price was also substantially lower than many conventional models,” he adds.

The water-cooled system Vista sold to Mitsubishi was a space-saving design that economizes on plant space compared with an air-cooled system, which entails massive package units.

“We installed four 40-ton air handlers mounted to the exterior walls, plus four 20-ton air handlers inside,” Matthews says. “With a typical 40-ton air-cooled package you’ll have a 450-sq.-ft. footprint. With our water-cooled system, we are taking up less than 30 sq. ft.”

A deciding factor among most Delta cooling tower customers is the 20-year warranty on the shell, as opposed to one year for the metal-clad design.

Adam Berning, sales engineer with St, Louis, Mo.-based manufacturers representative Blackmore & Glunt, explains the county school board agreed to install HDPE cooling towers because of the economies offered in purchase price and the towers being impervious to the harsh chemicals required to treat the extremely hard water used in the system.

The director of maintenance (for the school district) says Georgetown has, ‘the worst water on the face of the Earth,’” Berning notes. “He said they have to frequently clean their cooling towers and remove a salt-like residue that readily accumulates.”

Berning explains the HDPE cooling tower being virtually untouched by any corrosives was a major factor in the school board’s decision to go this route. But another important value-added factor was Delta’s ability to colorize the cooling tower installed on the roof at one location.

“The board wanted to have one of the cooling towers match the brick exterior of the school where it is installed.” he explains. “Ordinarily, getting a colorized cooling tower from the factory would be a challenge. The color was to be a custom rust-brown that the architect specified. Custom colors are available from the factory. They simply inject the appropriate-colored resin into the HDPE to make it exactly the color you want. When the cooling tower arrived, it matched the building quite well.”

Berning further explains the manufacturer also provided special water drainage outlets and a cooling tower platform. He adds the cooling system scheme at one of the schools called for the cooling tower to operate in two stages. Here again, he notes, value was added through the inclusion of a variable-speed drive-compatible fan motor with the cooling tower package.

“The first stage of cooling is provided when water pumps through the tower without the tower fan running. As the system fluid temperature rises above a threshold as determined by the building automation system, the cooling tower fan turns on to provide additional capacity. Once the fan is on, a VFD modulates the fan speed to provide the right amount of cooling.

“The first stage of cooling is provided when water is pumped through the tower without the tower fan running. As the system fluid temperature rises above a threshold as determined by the building automation system, the cooling tower fan is turned on to provide additional capacity. Once the fan is on, a VFD modulates the fan speed to provide the right amount of cooling. As a standard, the motor provided by Delta Cooling Towers is rated for operation through a VFD, and the VFD it provides easily communicates with the building automation system.”

Joe Homza, Jr. has more than 20 years experience designing and engineering cooling towers and has bachelor of science in mechanical engineering from Drexel University. Homza heads the engineering department at Delta Cooling Towers.

Next Gen All Star: Antonia Aldridge