A school building poses a tricky scenario when installing a fire sprinkler system. Students constantly fill hallways and classrooms, whether it’s classes during the day, sports after school or on weekends and activities throughout the summer. 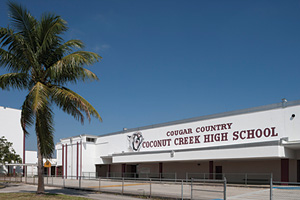 Finding the time to complete a major facility upgrade without disrupting the flurry of activity is a challenge. Educational facilities rarely close long enough for this to take place. How to solve this problem?

Ft. Lauderdale, Fla.-based Sprinklermatic Fire Protection Systems made a showcase of the Broward County School District, having outfitted the majority of the district’s buildings with new fire protection systems over the last decade. The project had about 22,000 ft. of pipe and 1,300 sprinkler heads installed in the various buildings.

Sprinklermatic, the engineer of record on the Broward County applications, and Vice President Timothy O’Brien has worked with Lubrizol CPVC and its BlazeMaster fire sprinkler systems for years and was excited to work on a new project.

“The Broward County school board needed to upgrade its fire protection systems,” he says. “That’s where the opportunity presented itself on the project. It became a question of, ‘How do you sprinkler a building that is in essence open all the time?’”

Updates to the school district’s fire protection began in 2003 as the administration learned one of its oldest buildings, Northside Elementary, required a new fire sprinkler system in order to meet new codes and regulations. Because of its age and structural makeup, Northside Elementary would require delicate work processes, which would become incredibly difficult with a steel system.

Initially, the Broward County school board balked at the prospect of a CPVC system installation, but Sprinklermatic brought in expert piping systems consultants from Lubrizol CPVC to present the benefits of a CPVC system to the board.

“The school board only knew steel pipe,” O’Brien says. “We had to teach them the benefits of CPVC. The cost benefits and the ease of installation sold them. We showed them we could install the product without tearing apart ceilings and that it could be done quickly.”

O’Brien notes that CPVC systems do not require prefabrication, which is an attribute that works well with the unpredictability of installations in buildings more than 50 years old where architectural and structural changes may not have remained consistent throughout the years.

An easy-to-use product was particularly important considering the time crunch involved with certain elements of the Broward County installations. In particular, one building had to be completed in less than two weeks. This was possible because compared to a steel system, CPVC cut down the hours dedicated to setup, cleanup and prefabrication.

Broward County’s Coconut Creek High School similarly was sprinklered in just 28 days in late 2013, enabling it to open for the school year on time.

“The versatile and flexible installation process of CPVC allows you to make changes on the fly, if necessary,” O’Brien explains. “The product allows you to work above ceilings in an occupied building with little to no interruption of operations and it brings fluidity to the project.”

Across the Broward County School District, Sprinklermatic has now received the opportunity to sprinkler several other buildings — totaling 13 campuses districtwide, each with around 10 buildings. Since installation, the district has reported no issues with the systems.

Mark Knurek has more than 20 years of experience in business development, marketing, engineering and brand management and joined the Lubrizol CPVC team in 2013. He holds a degree in mechanical engineering and an MBA.